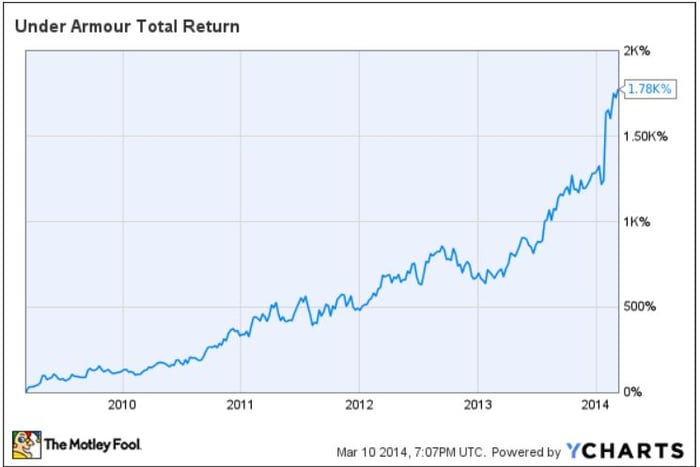 Under Armour (NYSE:UAA) has been one of the most explosive growth stories in the consumer sector over the past few years, and the company has delivered mind-blowing gains for investors. But Under Armour is now trading near historic highs, and the stock is valued at a considerable premium versus competitors such as Nike (NYSE:NKE) and lululemon athletica (NASDAQ:LULU). Is it too late to invest in Under Armour, or does the stock still have room to run?

On the other hand, this is not an apples-to-apples comparison. Nike is an industry leader with unquestionable strength, but the company lacks the same growth potential as Under Armour. With sales of more than $6.4 billion in the last quarter, Nike is more than 10 times as big as Under Armour, so it's naturally harder for Nike to generate the same kind of growth.

Nike is still generating sales growth in the range of the high single digits to the low double digits in recent quarters, so the company is doing quite well considering its size. However, Nike is no match for Under Armour and its vertiginous growth rates.

As for Lululemon, it's a whole different story. The company is going through material challenges as it tries to recover from product quality problems and serious public-relations mistakes. Management recently reduced its sales and earnings guidance for the fourth quarter of fiscal 2013, so there is no sign of a turnaround from Lululemon at this stage.

Under Armour is clearly more expensive than its peers, but superior growth deserves a higher valuation, so investors need to look into the future to see if Under Armour can, in fact, continue outgrowing its peers and justifying its valuation before deciding whether the stock is too expensive.

The future
Innovation has traditionally been a big part of Under Armour´s strategy, and the company is as strong as ever on that front. Under Armour´s ColdGear Infrared technology to provide warmth in a weight-efficient manner has been a big success for the company in recent months, and management is planning to expand that technology into new categories in the future.

The company is also quite optimistic about the momentum seen in footwear with its SpeedForm technology. Besides, the acquisition of MapMyFitness will most likely generate exciting opportunities in the wearable computing and social fitness area in the coming years.

According to CEO Kevin Plank, sales in the youth segment more than doubled the growth in the men's and women's apparel business during 2013. The women's segment is another promising one in which management sees plenty of opportunities, as women are increasingly wearing athletic apparel outside the gym and embracing Under Armour's technological innovation and style.

International sales were only $37 million during the fourth quarter, a small 5% of total revenues. In comparison, Nike makes more than 50% of sales from global markets, so Under Armour has enormous room for international expansion in the years ahead.

Bottom line
Under Armour has grown at full speed over the past year, but the company is running a marathon, not a sprint, and the race is barely getting started. Under Armour has a lot of room to continue growing via innovation, entering new sports disciplines and gaining market share among different kinds of consumers. As if that weren't enough, international markets are still practically untapped.

The company is a great candidate to hold for long-term growth and to add to positions on any pullback that may come along the way.