The U.S. energy boom looks set to reshape the domestic economy and, perhaps, world energy markets. Commodity prices, however, are volatile and make drillers' results unpredictable. Companies providing the "picks and shovels" to the energy industry, meanwhile, look like they have years of steady growth ahead, regardless of commodity swings.

Extracting the goods
Hydraulic fracturing is a key aspect of the nation's increased oil and gas production. The process can be summed up as shoving water, chemicals, and sand underground so oil and gas can rise to the surface more easily. The exact mixture is often a guarded secret. 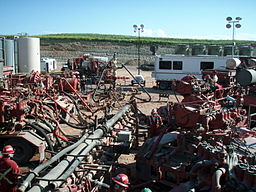 A feature of the process that isn't so secret, though, is sand, or at least substances similar to sand. Two major suppliers of these products are Hi-Crush Partners (OTC:HCRS.Q) and CARBO Ceramics (NYSE:CRR). Hi-Crush mines frack sand while CARBO makes ceramic proppants.

CARBO's ceramic proppant is more expensive than sand, but the company believes its results are worth the extra money. For example, Statoil (NYSE:EQNR) was able to increase the production of seven wells by up to 100% in the Bakken using CARBO proppants compared to 11 wells using sand. That translates to a revenue increase of $8.7 million per well, assuming oil is $70 a barrel.

Obviously, getting more out of each well is a huge benefit for drillers, and CARBO's proppants are a good start. However, the company is also increasingly offering services to drillers, including well-site services and a software tool to help optimize wells. As drillers like Statoil look to improve performance, look for CARBO to benefit across all of its products.

Getting from A to B
Pipeline companies are another sector that's likely to see continued demand as more oil and natural gas flow through the country. For example, the Northeast energy market is heavily reliant on natural gas (over 50% of electricity production), but has limited supplies. The regional grid operator is concerned about the risk this poses to grid reliability.

Kinder Morgan (NYSE:KMI), which already serves the region, thinks that's a big opportunity and is talking to customers about building more pipelines. Kinder's empire is vast, but much of the infrastructure it controls is owned by Kinder Morgan Energy Partners (NYSE: KMP) and El Paso Pipeline Partners (NYSE: EPB).

Kinder Morgan Energy Partners is one of the largest midstream players and has reliably paid distributions to unit holders for years. However, it has been the subject of critical review in the financial press, pushing its shares lower and, consequently, yield higher. That could present a good entry point for income investors.

Pipelines and all of the other infrastructure to handle oil and gas, from the well to the electric utility, need to be built before a company like Kinder can use it. For that, firms like Primoris Services (NASDAQ:PRIM) are needed. Primoris does everything from building bridges to repairing underground piping. Core to its business, however, are the energy and utility sectors. Both are seeing drastic changes because of the oil and natural gas boom.

Picks and Shovels
There's more than one way to play the U.S. energy resurgence. If buying a driller that is reliant on commodity prices is too risky for your taste, consider switching gears to the companies supporting the industry. That includes companies like Hi-Crush, CARBO, Kinder Morgan, and Primoris, all of which should continue to benefit as the United States moves closer and closer to energy independence.

If you are looking for a different perspective on the market...