It's more than just the announcement that office supplies giant Staples (NASDAQ:SPLS) is closing 10% of its stores over the coming years that invites comparisons to troubled electronics retailer RadioShack (NYSE: RSH), which with its own earnings release said it would be shutting 1,100 stores, more than double the previous 500 stores it said it would close.

Staples, like RadioShack, Best Buy (NYSE:BBY), and retailers typically not thought of as technologically relevant (J.C. Penney and Kohl's, for example) are placing oversized bets on "technology" to turn the tide.

For RadioShack and Best Buy, the two dove head first into cell phones, thinking they could fill the gap created by a lack of sales in other electronic gadgets (but neglecting their lower margins and the fact the market is awash in cell phone outlets). The department store operators simply used random tech splashes -- sales associates checking out customers with iPads instead of at cash registers, electronic pricing signs, etc. -- and the results were predictable. Penney nearly went out of business, though there was a lot more at play than just gimmicky ploys, while Kohl's looks like it's starting to circle the drain.

The office supplies retailer is taking a similar tack. A year ago Staples added accessories and peripherals for Apple (NASDAQ:AAPL) iPads, iPhones, and iPods, and then later on in the year allowed customers to purchase iPads and iPhones through its online store. Now during its conference call it said it has iPads in 900 of its physical stores, believing it enhances its competitive position as a small business tech destination point.

Apple did sell some 70.4 million iPads in 2013, according to the industry analysts at Gartner, a nice increase over the 61.5 million sold the year before, but the iOS operating system saw a dramatic 16 percentage point decline in market share compared to Android as the whole tablet market got bigger. Android-based tablets accounted for almost 62% of the global market, up from 45.8% in 2012. iOS fell from 52.8% to 36%. 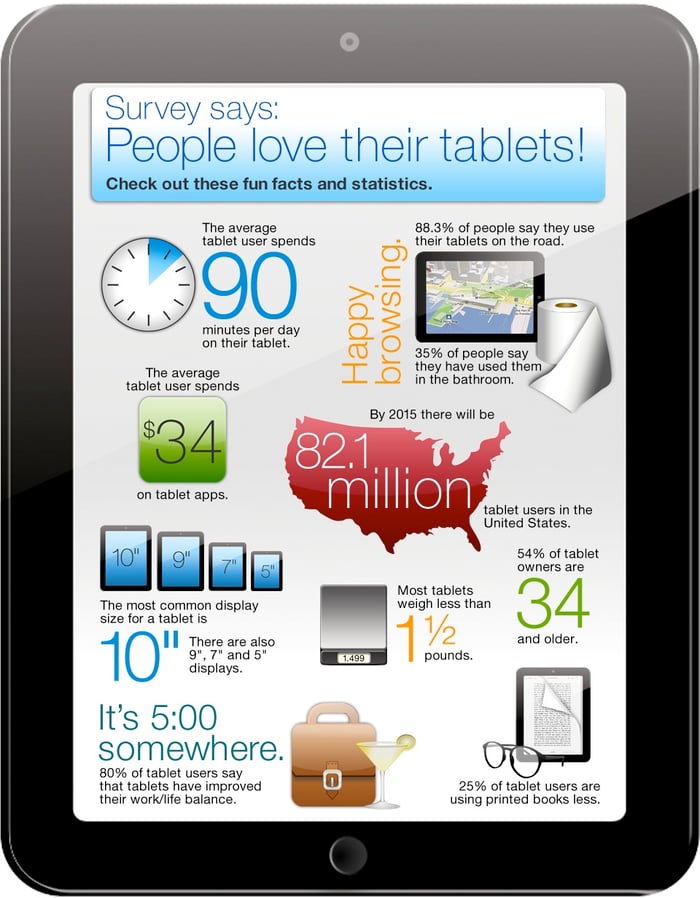 Sure, Staples is giving its customers more choice, but it also seems the office supplies leader is putting a lot of its eggs into the tablet basket like RadioShack did with cell phones. Because it says it was able to drive growth in tablets here at home in the commercial market as well as in Europe, it's taking an all-in strategy and making it a bigger part of its focus.

Instead, it should probably be angling to align its business more within the realities of the marketplace. Staples noted around half of its sales came from its online stores and both sales and traffic were down at its physical locations. Same store sales tumbled 7% in the fourth quarter, traffic was down 6%, and order size fell 1%. So the retailer is reducing its footprint and planning to drop 225 stores from its roster this year.

However, CEO Ron Sargent was quick to emphasize Staples wasn't abandoning its bricks-and-mortar model in favor of becoming an online retailer, but that just may be the direction it needs to take. Balancing an online store with physical locations is becoming a costly enterprise that's causing it to fall behind pure online retailers like Amazon.com. And while Staples is moving to get rid of many of its bigger stores and either shedding them completely or converting them to a smaller format -- it cut its footprint by one million square feet last year -- it may need to move even more dramatically in resizing its operations.

A weak economy doesn't bode well for Staples -- not in its current configuration, but not for one that wants to be just an electronic gadgets retailer either.

In the end Staples does have a "RadioShack problem," in that management seems to be looking for sizzle over substance, becoming the go-to place for businesses to buy their tablets just as the quirky electronics retailer thought being the destination for cell phones would cure its woes. Shares of Staples slid 15% after the news, and though they may have stabilized for the moment, I don't see the immediate future looking all that bright for the office supplies retailer.