In previous years, the Federal Open Market Committee's expanding monetary policy (e.g. lowering interest rates) has lifted demand for gold, which is often used as protection against the potential devaluation of the U.S. dollar. But back in 2013, the FOMC's policy of purchasing long-term treasuries didn't seem to lift the price of gold. Moreover, in the past couple of months, the price of has gold rallied, even though the FOMC decided to reduce its asset purchase program. This raises the question: Does the FOMC's policy still affect gold prices as it once did? Looking forward, will the upcoming FOMC meeting influence precious metals investors as it did before 2013?

Gold and the FOMC policy
The FOMC as of February tapered its quantitative easing program from $85 billion of long-term securities per month to $65 billion per month within two meetings. This decision, however, hasn't slowed the recovery in gold prices.

The chart below shows the changes in the U.S money base and the monthly average price of gold in recent years. 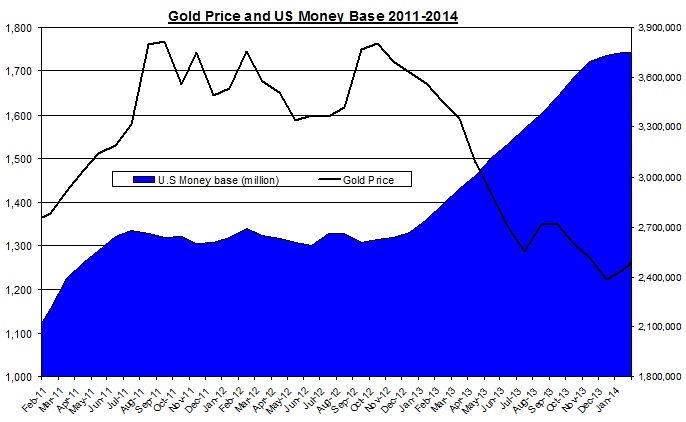 As you can see, the decision back in 2013 to start QE3 increased the U.S money base, but the price of gold continued to fall. Therefore, this finding suggests that the FOMC's plan to taper QE3 will also have little adverse effect on the price of gold. For now, this theory seems to hold up, as the two tapering decisions haven't curbed the recovery in gold.

Even though the FOMC's asset-purchase program doesn't seem to be affecting the price of gold, the progress of the U.S. economy continues to indirectly affect the demand for gold as an investment. In the past couple of months, several reports showed little progress in the U.S. economy, including in the housing, manufacturing, and labor markets. U.S. GDP grew by only 2.4% in the fourth quarter of 2013 compared to GDP growth of 4.1% in the previous quarter. If the U.S. economy slows down, it could shift investors toward safe-haven investments such as gold and U.S. Treasuries. The dollar is another factor that could affect gold prices.

Gold and the U.S. dollar
The progress of the U.S. economy tends to move the dollar, which is strongly correlated with the price of gold. 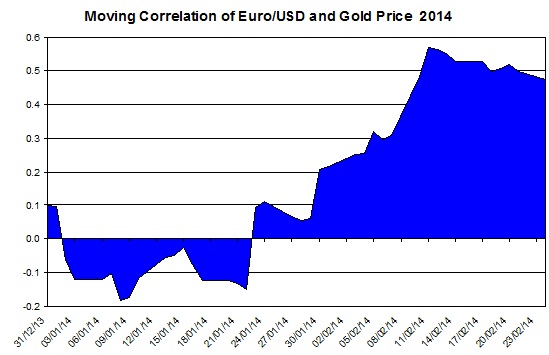 The chart above shows the moving linear correlation of gold's price and the euro/dollar exchange rate. As you can see, in the past several months, the correlation between the two has increased. Moreover, the dollar depreciated against the euro and several other currencies in recent weeks. Therefore, if the dollar continues to fall, it could positively affect the price of gold.

Final note
The gold market could benefit from the slowdown in the U.S. economy. And even if the FOMC continues to reduce its asset-purchase program, it is likely to have little to no effect on gold.