Forget the snake. It might be more appropriate to call 2013 the year of the tablet.

To be more specific, according to the Chinese calendar, 2013 was the year of the water snake. According to a recent report from Gartner, however, it was the year that tablets powered by Google's (NASDAQ:GOOGL) Android exploded in popularity.

Worldwide sales of tablets to end users reached 195.4 million units in 2013, a 68% increase on 2012. According to Gartner, "The tablet growth in 2013 was fueled by the low-end, smaller-screen tablet market, and first-time buyers; this led Android to become the no. 1 tablet operating system, with 62% of the market." 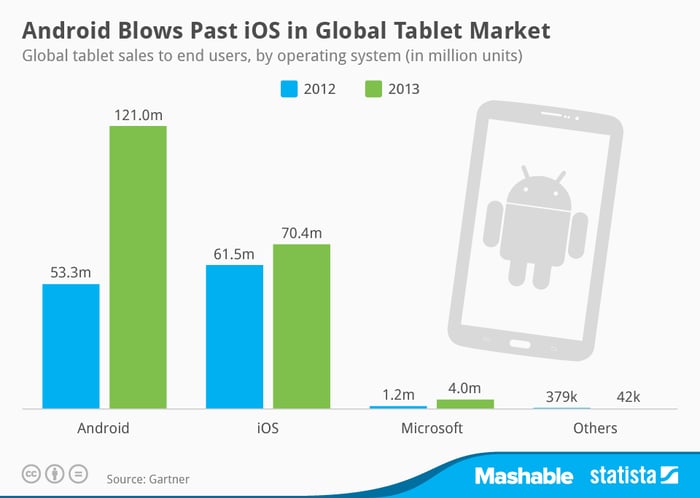 Android is winning now, but that's not because it's a better OS. It's likely because it's offered on more devices, including ones that hit lower price points.

"In 2013, tablets became a mainstream phenomenon, with a vast choice of Android-based tablets being within the budget of mainstream consumers while still offering adequate specifications," said Roberta Cozza, research director at Gartner." As the Android tablet market becomes highly commoditized, in 2014, it will be critical for vendors to focus on device experience and meaningful technology and ecosystem value — beyond just hardware and cost — to ensure brand loyalty and improved margins."

Not all bad news for Apple
While sales of iOS tablets grew in the fourth quarter of 2013, iOS's share declined to 36% in 2013. Apple may have a lower percentage of the growing market, but as the company only sells higher-end devices it was inevitable that it would lose market share.

The numbers are also a little skewed by the fact that emerging markets recorded growth of 145% in 2013, while mature markets only grew 31%. Price is much more of a factor in emerging markets, and given that there are sub-$60 Android tablets -- while the cheapest iPad sells for $299 -- it is logical that they will be the sales leaders.

"Apple's tablets remain strong in the higher end of the market and Apple's approach will continue to force vendors to compete with full-ecosystem offerings, even in the smaller-screen market as the iPad mini sees a greater share," said Cozza.

Microsoft might be a contender
Microsoft (NASDAQ:MSFT), with tablets running its Windows 8 operating system, went from being pretty much not in the market in 2012 (selling only 1.2 million devices) to becoming a minor player in 2013 by moving 4 million devices. That was largely fueled by the company getting its OEM partners to release a number of different tablets to supplement its own Surface tablet.

If Microsoft can keep its partners creating Windows 8 tablets at a variety of sizes, specifications, and price points, it could continue to increase its sales volume and grow its market share.

"To compete, Microsoft needs to create a compelling ecosystem proposition for consumers and developers across all mobile devices, as tablets and smartphones become key devices for delivering applications and services to users beyond the PC," said Cozza.

There might be room for everyone
Apple has shown that it can maintain sales despite an enormous amount of competition. The company has also steadfastly protected its status as a high-end product (which is good for margin). That means that some of the people who buy low-end Android tablets might ultimately migrate to iPads when they can afford them.

Android will continue to move a lot of devices because it's cheap and versatile. It's also behind the popular Amazon (NASDAQ:AMZN) Kindle, which gets promoted extensively by the online retailer. It's possible that one of the many companies making Android tablets might find a recipe to build a high-end device that can compete with the iPad as well. Samsung appears closest with its "Galaxy" line, but even those popular devices aren't giving Apple too much to worry about yet.

The biggest opportunity, however, may be for Microsoft. The company already offers high-end devices, and in the latter part of 2013 it introduced a number of mid-level tablets from its partners. In 2014, the market should also see an array of lower-end Windows 8 tablets. As I wrote about here, Microsoft has lowered the cost for a Windows 8 license and reduced the required specifications for devices using it.

That could make 2014 the year of the Windows 8 tablet.