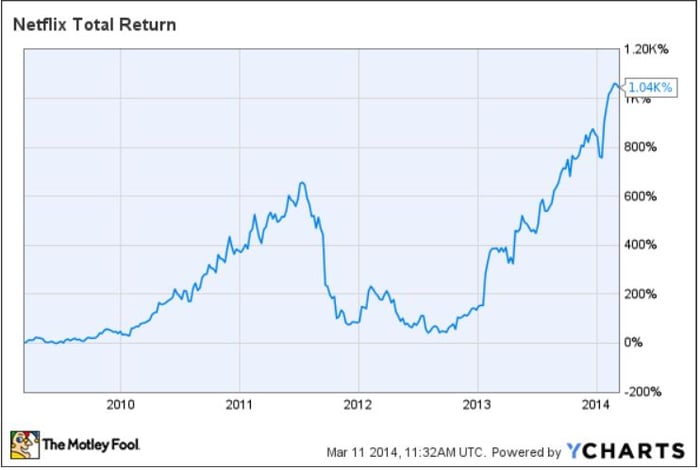 Netflix (NASDAQ:NFLX) has delivered mind-blowing returns for investors in recent years, and the stock is clearly priced at demanding valuation levels after such a steep rise. Besides, competition from players like Amazon (NASDAQ:AMZN) and Time Warner's (NYSE:TWX) HBO is a considerable risk to watch in such a dynamic and changing industry.

But none of this means that the run is over for Netflix. Far from that, the online-streaming leader still offers plenty of upside potential in the years to come.

Competitive risks
Amazon is usually considered the biggest threat for Netflix when it comes to online streaming subscribers. Amazon Prime offers free two-day shipping, access to the Kindle Owners' Lending Library, and more than 40,000 titles available for streaming via its Prime Instant online-video service for a competitive price of  $79 per year.

The service has "tens of millions" of members worldwide, and Amazon even had to limit new membership signups during peak periods in December due to capacity constraints.

Amazon is well-known for its aggressive competitive drive, and the company has deeper pockets than Netflix, but the online-retail giant is investing heavily in different growth areas at the same time, so video streaming is probably considered another way to add value to its customers as opposed to a big business opportunity for Amazon on a stand-alone basis.

Time Warner has recently announced that HBO ended 2013 with approximately 43 million domestic subscribers in the U.S. and nearly 85 million international subscribers. The HBO GO mobile app grew more than 30% during the year, and the service is now available in 23 international markets.

Netflix has always recognized HBO as a major competitor, not only because of its presence among customers, but also due to its strength when it comes to content and original programming. HBO is entering 2014 with returning hits like Game of Thrones, Boardwalk Empire, True Blood, and Girls, in addition to five new series, including the already successful True Detective.

Content is king
Competition is always a risk to watch, especially in such a growth business. But investors need to consider that online video streaming won't necessarily be a zero-sum game in which only one company wins and the other ones go down.

The media and entertainment industry has always generated enough opportunities for multiple players to profit and grow over time, and there is no reason to believe streaming will be much different.

Besides, Netflix is building its competitive strengths and differentiation on the basis of providing valuable content for a convenient price, quite a simple and effective proposition for customers.

Looking at productions like House of Cards in terms of financial costs versus incremental subscribers is far too shortsighted: Netflix is playing this game for the long term, and the key is creating a library of unique content to capitalize the enormous room for growth offered in online streaming over the coming years. From that perspective, Netflix's venture into original content has been spectacularly successful.

Investors need to monitor the competitive dynamics in the business, but Netflix is stronger than ever in terms of content and differentiation, so the company has the strength to continue thriving in the face of increasing competition.

The price of growth
Netflix trades at an aggressively high forward P/E ratio of almost 60 times earnings estimates for 2015. This is certainly a demanding valuation that incorporates high growth expectations, but the company has what it takes to grow into its valuation.

Sales have been booming lately, and profit margins are on the rise over the last several quarters as revenues are outgrowing content costs. Management expects to reach its goal of a 30% contribution margin in the U.S. by 2015, and the combination of growing sales and increasing profit margins could provide a double boost to earnings growth in the years ahead.

The company is doing remarkably well in the U.S., and international markets still offer enormous room for expansion. This growth story is far from over, and valuation is no reason to avoid Netflix from the perspective of a long-term investor.

Bottom line
Operating in a highly dynamic industry and trading at aggressive valuation levels, Netflix is clearly an investment with above-average risk. But the company has the competitive strength and the market opportunity to continue delivering outstanding growth rates for investors over years to come. This exciting movie is just getting started.