Nearly four years after BP PLC (NYSE:BP) spilled four million barrels  of oil  into the Gulf of Mexico, the company is still paying for its crime. A new ruling by the Federal Court puts Big Oil on the line for billions more as small businesses stick it to the man.

Keep on Claiming
BP PLC can't catch a break. A federal appeals court rejected the oil company's request last week to reconsider thousands of claims that BP PLC states have nothing do with spilt oil.

Speaking with The Wall Street Journal, BP Spokesman Geoff Morrell iterated his company's disagreement with the finding that spill settlement claims are being properly administered. Mr. Morrell's words should come as no surprise to those following the saga.

BP PLC is tired of being taken out to dry, and has launched a public campaign questioning the validity of claims against it. The company even took out full page ads in The Wall Street Journal, The New York Times, and the Washington Post , giving real-life examples of small business claims it views as fraudulent: 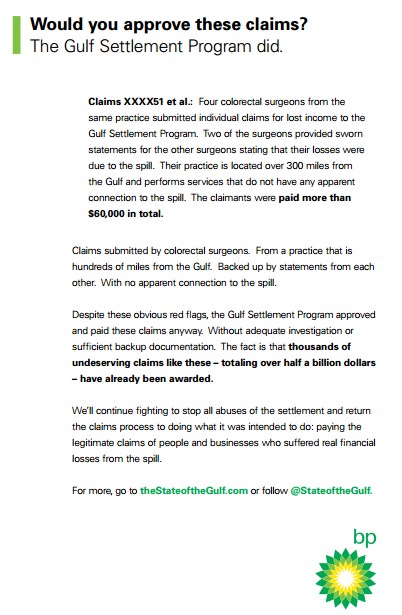 Nightmares such as this claim continue to push costs up for BP. Ironically, its predicted settlement costs have expanded much in the way its own estimates of total barrels spilt continued to grow in the days and weeks following the disaster.

While BP PLC originally put total payments at $7.8 billion, this latest ruling is expected to add on another $1.4 billion to BP's bill .

Don't Cry Over Spilt Oil?
If BP PLC's depiction of the above claim is correct, it may have a reason for wanting to reign in claim settlements. According to its own estimates, the company has already handed out over half a billion dollars to "undeserving claims ."

But if anyone should understand margin of errors, it's BP. Oil rigs carry risk, and so do claims. BP will never recover every drop of oil spilt into the Gulf of Mexico, and it shouldn't expect settlements to always flow smoothly. While the company claims there's half a billion bucks being distributed to the wrong awardees, the current actual tally (from BP's own website) puts fraudulent cases at much lower numbers.

Where to From Here?
Uncle Sam has shown his support for small businesses. And once again, it's at the expense of Big Oil. Ultimately, no one but the claimants will ever know how many dollars pulled from BP's pockets should've stayed there.

BP PLC has worked hard to diminish the effects of its spill. The company has spent around $26 billion total to pay out claims, clean up oil, and restore affected areas . But while BP PLC notes that "no company has done more to respond to an industrial accident ," it doesn't mention why: its industrial accident also happens to be the worst offshore oil spill ever in the United States .

Looking ahead, these latest cost increases won't bankrupt BP PLC. With $376 billion in sales and $11.8 billion in profit for 2012 , this oil company should keep on expanding.

Rather, this latest court ruling will serve as a continued warning to corporations everywhere: revise your cost-benefit analyses today, or be prepared to be unpleasantly surprised if things ever go sour.