High-yield business development companies, like Ares Capital Corporation (NASDAQ:ARCC) and American Capital Ltd. (NASDAQ: ACAS), can make a killing investing in risky debt, but it's their equity investments that can make or break the returns.

Generally speaking, the average BDC invests the overwhelming majority (90% or more) of their assets in debt, and a small minority (roughly 10%) in equity. The general consensus is debt investments will generate current income, while irregular gains from equity investments should hopefully cover loan losses in the debt portfolio.

Over time, realized gains or losses have an outsized impact on a BDC's total return. Ares Capital Corporation likes to cite its positive cumulative realized gains as evidence of quality underwriting -- gains from debt and equity sales have exceeded losses from other investments over the company's history. This is what most BDCs want to see -- consistent high-yields from debt investments with any credit losses covered with other gains.

So, with that, here's a chart to compare the net realized gains or losses to total assets by year, from 2007-2013, for a number of BDCs. 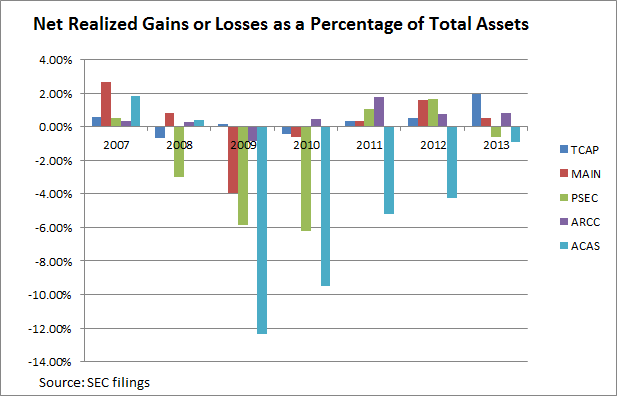 You'll likely first notice the outlier: American Capital. Forced selling during the 2008 financial crisis led it to take huge losses to stay solvent. Naturally, those sales also led to incredible realized losses on debt and equity investments. Let it be a lesson to any BDC investor that a BDC needs good funding sources during good and bad economic climates. Conservative funding would have likely allowed American Capital to avoid most of its losses incurred in the 2009-2010 period.

What you should also notice, is the three best performing BDCs since 2007 have also been those which have been most consistent in posting net realized investment gains.

Ares Capital, despite being one of the largest BDCs, and having investment yields on the lower end of BDC portfolio spectrum, was the third-best performing stock, delivering total returns of 164% over the last 6 years. Ares Capital generated net realized profits in all but one year, 2009. To date, it has exited its high-yield investments at a higher price than it has paid, only adding the earnings from investment yields.

Bringing it together
This chart, which adds up all realized gains or losses from 2007-2013 and divides them by year-end 2013 assets really brings it all together. 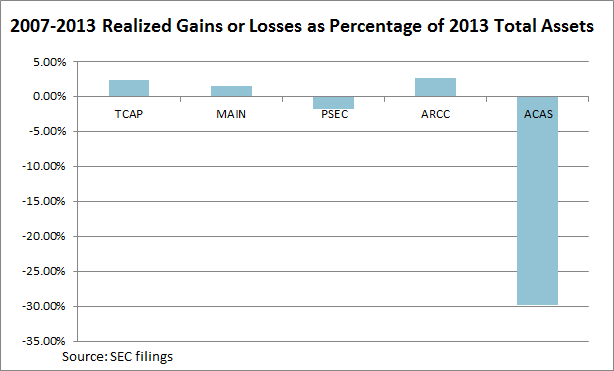 Notice the top-performers, which all more than doubled their shareholders' returns, all have cumulative realized gains over the period. Triangle Capital and Main Street Capital generated 311% and 317% total return price returns over the period, respectively.

Surprised? You shouldn't be. To be fair, Prospect Capital and American Capital investors would have earned 49% and 7%, respectively, over the years studied. But this just goes to show while high-yield debt investments can deliver huge interest payments, a handful of loan losses can mute most of the return.

It also shows, if anything, the quality of the portfolio managers at Triangle Capital and Ares Capital, which posted the lowest variability in realized gains over the period.