Which would you rather own, a leading hardware tech company or a leading Internet company?

Leading hardware tech companies can be enormously profitable. They tend to grow quickly, realize economies of scale, and build world-class brands. The problem for those companies, however, is the short hardware product cycle. Most tech hardware products, no matter how good, see their markets saturated, growth slows, competitors enter at lower price points, and margins compress fairly quickly.

Leading Internet companies do not typically have that problem. They tend to have much longer product cycles because their products have high network effects.

Leading Internet companies, such as Facebook (NASDAQ:FB) and Google (NASDAQ:GOOGL), also do not see their margins compress due to competitors entering at lower price points. This is because Facebook and Google's products are free to users. It is the advertiser, not the user, who pays for the service, and advertisers only care about return on investment, not price. The only way for a competitor to gain market share is to offer a substantially better product. This would be very difficult because Facebook and Google could simply use their respective might to overshadow any newcomers.

How the market views Apple
To many market participants, Apple (NASDAQ:AAPL) is just a leading tech hardware company. While Apple does have a world-class brand, economies of scale, and a talented workforce, those market participants think Apple's future margins will still follow that of a traditional hardware tech company, where margins decrease as competitors offer comparable products at lower price points.

To a certain degree, those traditionalists have been right. Apple's gross margins are down around 10% from their peak.

But, over the past year, Apple's gross margins have held steady around 37%-38%. 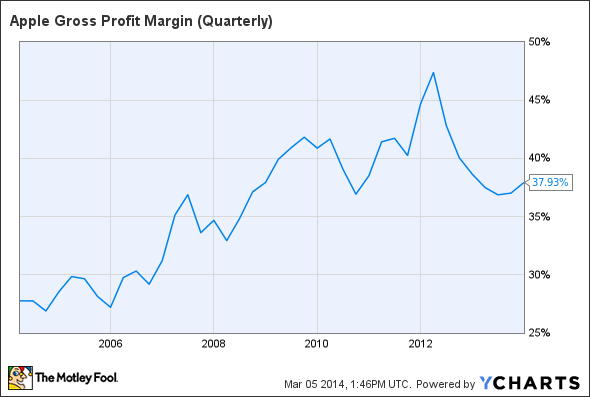 While part of the reason for the steady gross margin is Apple's world-class brand, a lot of credit also goes to the company's software. Apple software ensures that existing customers continue to buy Apple products. Customers are locked in, which gives Apple pricing power.

For example, if an Apple customer switched to Android, he would need to transfer or buy all the applications, videos, and documents that he had on his original phone or tablet. All of this takes time, money, and effort. Many people would rather just buy another iPhone or iPad and have their data automatically synced.

Facebook and Google command high valuations because of their future potential. Each company has over 1 billion users.  If they successfully launch a new software product and charge customers for it, they can realize large revenues at low cost, and their profits would go up. If they launch a hardware product, such as Google Glass, they have built-in marketing advantages thanks to those billion users. Those built-in marketing advantages increase the chance of success of new products. Depending on how the market views the software or hardware, the companies' stock price would also increase.

Like Facebook and Google, Apple also has many users. iTunes has has over 500 million customers. With its talented workforce, Apple could, one day, develop a killer software application that is just as profitable as Google's search.