Please ensure Javascript is enabled for purposes of website accessibility
Free Article Join Over 1 Million Premium Members And Get More In-Depth Stock Guidance and Research
By Daniel Sparks - Mar 12, 2014 at 11:00AM

The majority of smartphone profits go to one company: Apple. And it doesn't look like that will change anytime soon.

The outlook for the smartphone market doesn't look nearly as rosy anymore. Smartphone market growth in the U.S. and Europe has already slowed to single digits. Further, IDC suggests that worldwide smartphone growth will rapidly decelerate in the next several years, too. Considering that Apple's ( AAPL -1.17% ) iPhone accounts for 56% of the company's revenue and an even larger portion of its operating income, should Apple investors be worried? Not necessarily -- Apple's fate can't be explained with a facile glance at a dwindling smartphone market.

Decelerating growth rates
Last year's global smartphone sales growth of 40% will be halved in 2014 to about 20%, IDC says. The U.S.-based market research company projects the trend to continue, with growth rates hitting 8.3% in 2017 and 6.2% in 2018. 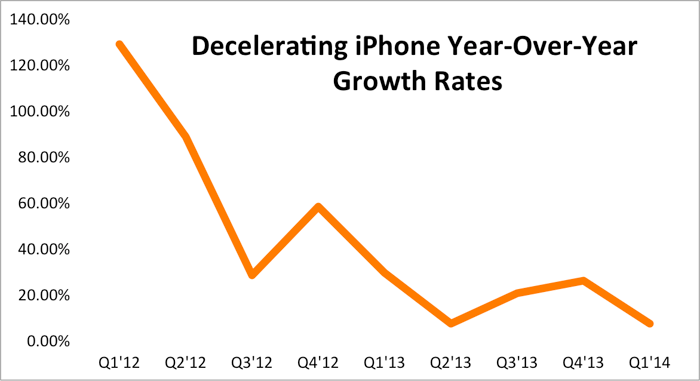 In fact, one of the probable reasons for the sell-off of Apple stock that followed the company's fiscal first-quarter earnings report was the lackluster iPhone year-over-year unit sales growth rate of just 7%.

Apple's pricing power
Enter Apple's pricing power. Apple's 2013 average selling price, or ASP, of about $650 is about double that of the worldwide smartphone market's ASP. Apple's considerable pricing power helped the company capture about 87.4% of global mobile phone profits in the fourth quarter of 2013, according to estimates by Raymond James analyst Tavis McCourt. That's an impressive feat considering Apple's shipments only accounted for just 17.6% of total fourth-quarter smartphone shipments, by IDC's estimates.

Apple's iPhone 5s sells successfully in the market at a staggering entry price of $649.

Going forward, IDC estimates the disparity between Apple's pricing power and the rest of the market will grow. IDC expects a compound average growth rate of -1.2% for the price of Apple smartphones between 2014 and 2018 and a rate of -5% for the smartphone market as a whole.

Apple's iPhone business looks poised to reap profits for years to come. Already priced for little to no growth, any upside from new categories gives the stock upside potential with very limited downside.

Here's another way to look at it: With Apple's current levels of cash flow poised to remain robust in light of the iPhone's pricing power, Apple can continue to repurchase shares to boost EPS even in the face of flat or slightly declining revenue (and don't forget Apple's dividend). With that said, any upside from new categories, or from Apple's growing iPad segment, could be a major boon for the stock. Further, Apple tends to have greater pricing power than competitors in every category it enters so new categories could end up being cash cows, too.