Units of Marlin Midstream Partners (NASDAQ: FISH) debuted last year. It's a small player in the midstream space, but it looks like it could have big growth prospects. If you're looking for an alternative to industry giants like Kinder Morgan Energy Partners (NYSE: KMP) and Enterprise Products Partners (NYSE:EPD), you may want to take a look.

Small fish in a big pond
Marlin's market cap is around $300 million, that seems like a rounding error compared to the over $33 billion market cap at Kinder Morgan Energy Partners and the nearly $62 billion market cap Enterprise. Being a small-fry has left Marlin hidden in the shadows. In fact, it's shares are trading below their IPO price. 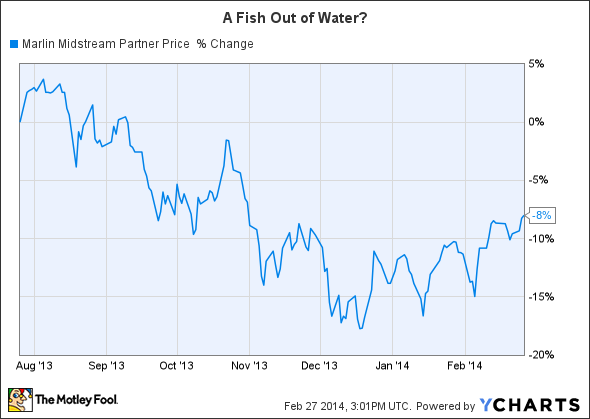 That, despite some pretty positive prospects. For starters, being small has its benefits. Kinder Morgan Energy Partners and Enterprise have to make huge acquisitions and investments to see any impact on the top and bottom lines. For example, Kinder is buying its way into the Jones Act shipping business at the cost of about $1 billion.

Marlin can benefit from deals that Enterprise and Kinder wouldn't even bother looking at. Although the price is undisclosed, Marlin already has a deal lined up to buy a 28-acre industrial site in New Mexico that is positioned to serve the San Juan Basin region. The seller is the company's General Partner (GP), NuDevco.

The CEO of both companies, Keith Maxwell, commented, "San Juan is an underserved crude oil region with tremendous demand for value-added midstream services... These strategically located land assets in New Mexico offer a direct line of sight for Marlin to potentially lucrative dropdown opportunities from our sponsor that will drive the growth of the business."

Little debt
That said, it takes money to make money. NuDevco can have all of the assets in the world to sell to Marlin, but if Marlin can't afford them there's no growth potential. But Marlin stacks up well here, too. It used the IPO proceeds to pay down debt, so there's plenty of room on its balance sheet to buy income producing properties.

How much room? At the end of 2013, long-term debt stood at just $4 million, or about 2% of the partnership's capital structure. That's down from over $120 million at the end of 2012. Maxwell made no bones about the benefit of this, stating in the fourth quarter earnings release that low debt, "...gives us the financial flexibility to pursue disciplined growth." He noted that more asset dropdowns from the GP were actively being evaluated. Moreover, Marlin has first dibs on NuDevco assets for another four years or so.

How much opportunity?
Although there's no way to predict how much potential upside there is at Marlin, it's worth taking a look at American Midstream Partners (NYSE:AMID). This midstream partnership is even smaller than Marlin with a $100 million market cap. The shares sold off toward the end of 2012, but then advanced from a low of around $15 to over $25 during 2013. Although it's pulled back some, key drivers of the overall advance were acquisitions and the partnership's first distribution increase. 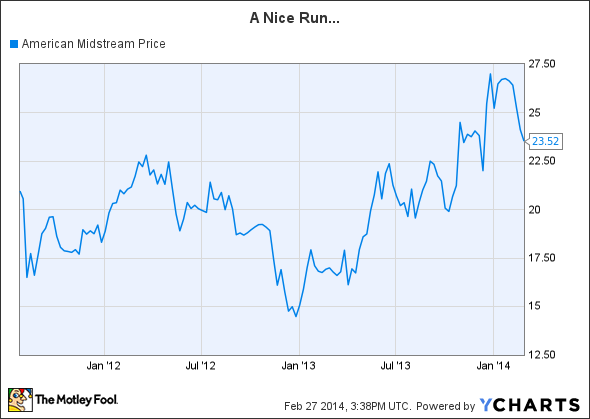 AMID data by YCharts

The two purchases the company made weighed in at just about $160 million—a lot less than what Kinder is paying to get into the Jones Act shipping business. And the impact at American Midstream shows the potential at Marlin.

Slow and steady or fast and risky?

If you are looking for slow and steady growth and regular dividends, you should focus on giants like Kinder Morgan Energy Partners and Enterprise Products Partners. The pair will continue to expand and have regularly rewarded unit holders with distribution hikes. However, smaller player American Midstream shows that there's notable growth potential if you're willing to invest in up and comers. Right now, tiny new entrant Marlin could be a bargain "catch" for more aggressive types.

If you like the idea of getting in on the ground floor...