About three years ago, 3D Systems (NYSE:DDD) set out on a quest to define itself as the "Everything 3-D Printing Store" and has since completed nearly 50 acquisitions to expand its 3-D printing arsenal. Consequently, 3D Systems has often been criticized for "acquiring revenues" and not exactly growing in a way that suggests its core products are increasing in popularity. While it's true that 3D Systems has been using acquisitions to help fuel its revenue growth, it has nonetheless been able to increase its organic growth rate considerably -- organic growth is sales growth that doesn't count acquisitions within the past year. 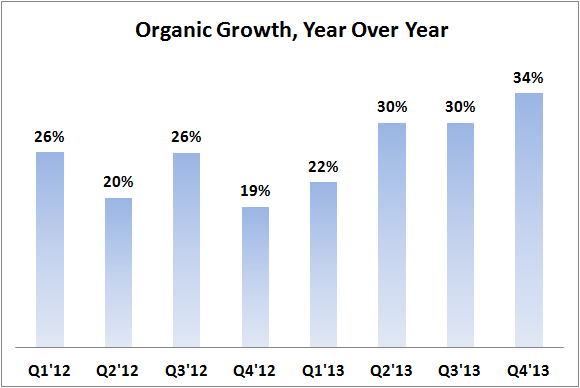 Inside the organic growth rate

Because organic growth doesn't account for acquisitions made in the past year, it gives investors a more realistic look at how the company's core portfolio is growing in comparison to its overall revenues, and whether management is making the right kinds of acquisitions. It's a great sign to see 3D Systems' organic growth rate rising, indicating that the company has the ability to make acquisitions that are producing longer-term success. Ultimately, the name of the game for 3D Systems is to grow market share over the long term, and growing organically will play a major role in this storyline.

Growing the pie
The 3-D printing industry expected to grow -- on average -- by about 20% a year between 2012 and 2021, and eventually become a $10.8 billion industry. An annual organic growth rate above 20% would suggest that 3D Systems is gaining market share outside of recent acquisitions -- a far more sustainable approach than using acquisitions to fuel growth over the long term. In 2014, 3D Systems expects to achieve 30% organic growth and claim more of the 3-D printing pie, a trend that will likely continue in the years beyond.

A key driver
3D Systems' foray into the metal 3-D printing space through its Phenix Systems acquisition will help fuel its organic growth rate in the years ahead. Although Phenix only generated $14.3 million in sales in 2013 -- a small fraction of $513.4 million in total revenue 3D Systems brought in -- 3-D metal printing is becoming an increasingly important application in high-growth areas like aviation.

In the years ahead, General Electric and others will be investing tens of millions into metal 3-D printing to make mission-critical airplane components, which are expected to end up in commercial aircraft in the coming decade. As a result, 3D Systems expects its metal printing business will grow substantially and generate between $25 million and $50 million in revenue in 2014. Going forward, demand for metal 3-D printing is likely to continue growing as these aviation giants continue ramping up capacity, paving the way for 3D Systems' to turn what's currently a small business into a booming business.

Separating the noise
The harshest criticism about 3D Systems' strategy is that outside of acquisitions, the company doesn't really have a strategy. While it's easy call 3D Systems a serial acquirer and cause concern to the long-term story, management has been proving that it can make the right kinds of acquisitions by being able to drive higher organic growth. Over the long term, organic growth is what will be most important for shareholders, because it will greatly factor into whether or not 3D Systems can grow its market share.