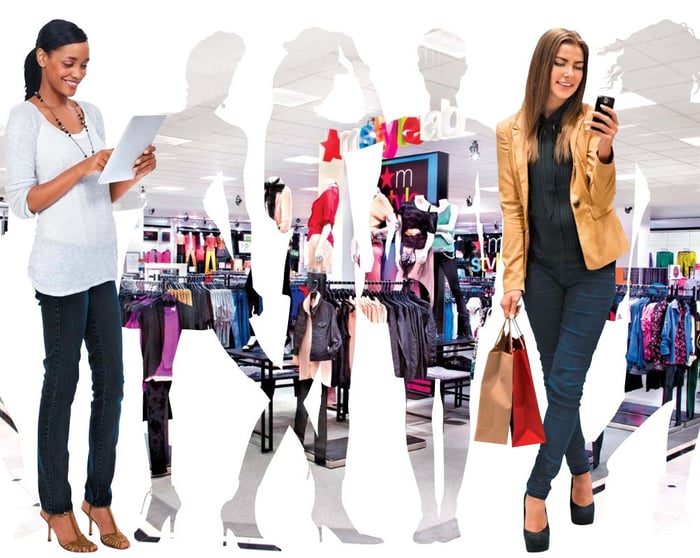 Macy's (NYSE:M) is materially outperforming competitors, be it companies facing difficulties and trying to turn their business around, like J.C. Penney (OTC:JCPN.Q) and Sears (NASDAQ:SHLDQ), or more solid players like Kohl's (NYSE:KSS) and Dillard's (NYSE:DDS). Interestingly, the stock is trading at similar valuation levels to those of its peers, so Macy's looks like it might be a buying opportunity for investors. Let's take a closer look.

A high-quality company
Macy's has emerged stronger than ever from the great recession in 2008 and 2009. The company has taken a series of initiatives like relying on private-level offerings, efficient inventory management, and price optimization to deliver the right products to its customers in the desired way.

In addition, Macy's is focused on providing a differentiated experience for customers via a strategy that management calls MOM: My Macy's localization, Omnichannel integration, and Magic Selling. The company has been a leader in terms of adapting to a changing retail environment, and this is being reflected in its financial performance.

Adjusted diluted earnings per share came in at $2.31 during the quarter, materially better that the $2.17 forecast on average by Wall Street analysts and representing a strong increase of 13% versus the $2.05 the company reported in adjusted earnings per share for the fourth quarter of 2012.

A challenging industry
J.C. Penney has recently caught a lot of attention from investors after the company announced a better-than-expected increase of 2% in comparable-store sales during the fourth quarter of 2013. The company has been suffering from declining sales over the last several years, so it's far too soon to tell if this is only a short-term rebound or the beginning of a viable turnaround.

J.C. Penney continues losing money, and the company carries considerable debt on its balance sheet, so it's a far riskier investment proposition than Macy's.

Sears is materially worse than J.C. Penney; sales are falling from a cliff with domestic comparable-store sales falling by 6.4% during the last quarter of 2013. When it comes to Sears, there is not much reason for optimism until the company manages to at least stabilize performance.

Kohl's managed to beat earnings estimates during the last quarter, but comparable sales declined by 2% during the period. During fiscal 2014, management is expecting comparable sales to be between flat and a 2% increase. The company is doing a sound job going through the difficult scenario, but profitability will likely remain under pressure in the coming quarters due to pricing discounts to sustain sales volumes.

Dillard's reported a 2% increase in comparable-store sales during the quarter ended on Feb. 1, but gross margin from retail operations declined 180 basis points to 32.8% of sales as the company is resorting to discounts in the face of a challenging competitive landscape.

A convenient valuation
Macy's is clearly sounder than J.C. Penney and Sears, and the company is also outperforming Kohl's and Dillard's by a considerable margin in terms of both sales and profitability, as expressed in its superior gross profit margin and return on equity ratios.

Still, when looking at valuation ratios like P/E and forward P/E, Macy's is only marginally more expensive than its peers.

Bottom line
Due to its innovative strategies to adapt to a changing retail industry, Macy's is clearly outperforming the competition in a challenging environment for retailers in general and department stores in particular. But this superior player is only trading at a small valuation premium versus other companies in the industry. In terms of price versus quality, Macy's looks like a convenient purchase for smart shoppers.