Big oil giants like ExxonMobil (NYSE:XOM) and Apache (NASDAQ:APA) continue to wade deeper into the Gulf of Mexico. In doing so these giants are giving up on legacy operations in the shallower waters of the Gulf for more exciting growth prospects like those found in the ultra-deep waters of the Gulf. That's not to say these shallower Gulf of Mexico Shelf assets aren't worth anything. In fact, these assets are seeing a renaissance as the new owners use technology to unlock even more oil out of these legacy assets.

Quietly finding its way to the top
One of the big buyers of Gulf of Mexico Shelf assets is Energy XXI (NASDAQ: EXXI). The company scooped up a billion dollars' worth of ExxonMobil's shelf assets in 2010 and now it's making another billion dollar buy. In its latest move announced today Energy XXI will acquire fellow Gulf of Mexico shelf operator EPL Oil & Gas (NYSE: EPL) for $1.53 billion, or about $2.3 billion including the assumption of EPL's debt. That deal will create the largest public independent producer on the shelf.

Once the deal is completed the combined business will produce about 65,000 barrels of oil equivalent per day, of which 70% of that production will be oil. However, this deal isn't so much about getting bigger. Instead, thanks to the use of new technology, including horizontal drilling, its about setting up Energy XXI for a future that will have it breathe new life into the acquired legacy oil fields. As the following slide shows there's still a lot of oil left in these fields so that just a 5% increase in the recovery factor would double the proved reserves of Energy XXI. 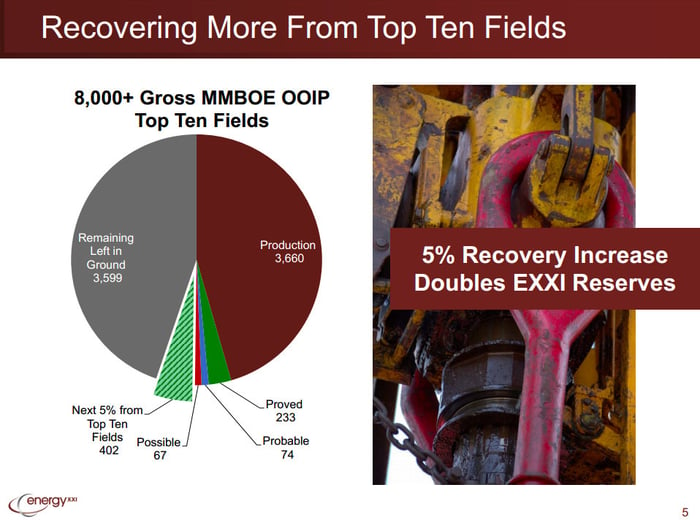 Just getting started
Energy XXI has a significant development inventory of 109 projects that include infill drilling opportunities as well as dump flooding. These opportunities should enable the company to extract more oil out of these legacy assets. Further, most of the development projects are much lower in risk than the exploration projects that Apache and ExxonMobil are drilling in the deeperwater of the Gulf as Energy XXI is drilling into known producing areas.

In addition to that the company has identified another 73 exploration projects that offer big future upside. The company could start drilling these prospects as early as 2015. These areas are much deeper than currently producing zones, but the potential isn't lost even with big oil. In fact, when Apache sold its Gulf of Mexico Shelf operations to privately held Fieldwood Energy last year it kept a 50% interest in all of the exploration blocks in areas that are below current producing areas. These exploration areas could really revive the Gulf of Mexico Shelf in the future.

Investor takeaway
Energy XXI has been quietly snapping up Gulf of Mexico Shelf properties for years. With its latest deal to buy EPL Oil & Gas it has become the largest independent producer on the Shelf. That production should continue to grow over time as the company has a number of development projects in the pipeline as well as some exciting exploration projects even deeper.

None of this potential would be possible if it wasn't for the use of new technology to unlock additional supplies of oil still trapped in the Gulf of Mexico. Thanks to technological advances this is oil that we won't need to import from OPEC in the future. This is why it's really good news to see this once forgotten part of the Gulf head into the 21st century thanks to Energy XXI.

This is what has OPEC really worried