Please ensure Javascript is enabled for purposes of website accessibility
Free Article Join Over 1 Million Premium Members And Get More In-Depth Stock Guidance and Research
By George Budwell - Mar 13, 2014 at 10:12AM

Orexigen Therapeutics has yet to follow in the footsteps of its competitors prior to approval of their obesity medications. Why?

I'll never forget watching Arena Pharmaceuticals ( ARNA -1.54% ) and VIVUS ( VVUS ) in early 2012 as each company headed into their regulatory reviews with the U.S. Food and Drug Administration, or FDA, for their respective obesity medications. It was certainly a sight to behold. Shares of Arena started the year off inauspiciously at under $2, but ended up soaring to over $11 the day Belviq was approved. VIVUS followed suit, with each company exceeding 500% gains in the few short months prior to the formal approval of their drugs by the FDA.

Since then, Arena and VIVUS have certainly had their share of struggles, as each company's drug has failed to live up to the haughty expectations of retail investors. But let's hold that thought for later.

I wanted to revisit Arena and VIVUS's salad days, or pre-commercialization era, in order to discuss what might be in store for Orexigen Therapeutics (NASDAQ: OREX). As most investors in this space are aware by now, Orexigen has an obesity medication called Contrave that is currently under review with the FDA, and is set to be reviewed by the European Medicines Agency as well.

Because Orexigen appears to have met the FDA's safety requirements for approval via the LIGHT study, Contrave stands a good chance to follow in the footsteps of Belviq and Qsymia to become the third member of the new generation of commercially available obesity meds. Moreover, I think that Contrave has the best chance of the three of actually being approved in Europe in the near future, due to the large amount of data collected on cardiovascular outcomes in the LIGHT study.

So, it stands to reason that Orexigen shares would share the fate of Arena and VIVUS pre-commercialization, and begin to go parabolic heading into this regulatory review, right? In other words, if past is prologue, Orexigen should be a strong buy right now, evinced by the chart below. 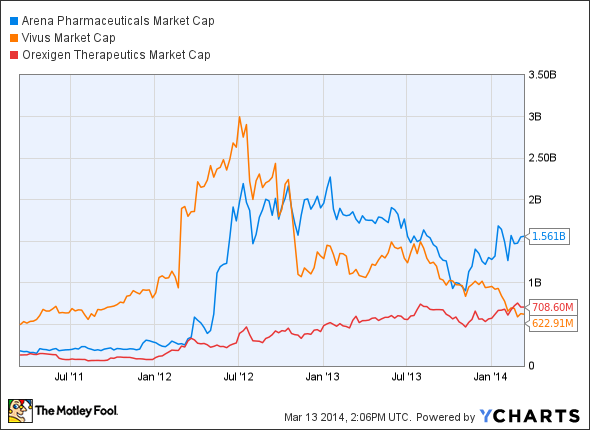 Did Arena and VIVUS spoil the party?
One of the clear lessons the above chart should impress upon you is that Arena and VIVUS have fallen dramatically following the FDA approval of their obesity drugs. And the reason is clear-cut. Arena generated only $2.4  in revenue from Belviq sales in the fourth quarter of 2013 and $5.7 million for the year--about two full quarters on the market. VIVUS didn't fare much better. In the fourth quarter, VIVUS reported $7.7 million in revenue from Qsymia, and $23.7 for the full year. Put simply, it's hard to support billion-dollar market caps with revenue streams in the tens of millions.

What the Belviq and Qsymia experiments in commercialization show is that the obesity market is a tough nut to crack. As the management of each of these companies has stated multiple times, the obesity market is in desperate need of development. And what they are referring to is the need to increase insurance coverage for obesity medications, a change doctors' attitudes toward pharmaceutical options for chronic weight management in general, and the need to convince a dubious public that these new medications are indeed safe. The good news is that insurance companies are starting to open up to covering obesity medications, and Arena is reporting that an increasing number of physicians are prescribing Belviq. So, there are signs that the market is starting to open up, albeit slowly.

Foolish outlook
I know there is a growing number of investors hoping that Orexigen will triple or quadruple heading into Contrave's regulatory review. And again, if past was prologue, they would undoubtedly be correct in their assumption. However, I believe the harsh realities of commercializing an obesity medication will put a damper on Orexigen shares for the time being. Put simply, I think Mr. Market is taking a 'show me' attitude toward Orexigen--otherwise you probably would have seen signs of a pending parabolic move akin to Arena and VIVUS.