At Intel's (NASDAQ:INTC) investor meeting, CFO Stacy Smith was keen to highlight the cost savings in the low-end PC space in moving from its Bay Trail-M/D products to the Celeron version of its Broxton system-on-chip, which was designed primarily for smartphones and tablets. Indeed, according to the following graphic, the cost reduction from the current-generation Bay Trail-M/D to Broxton, a 2015 product, is on the order of 37%. 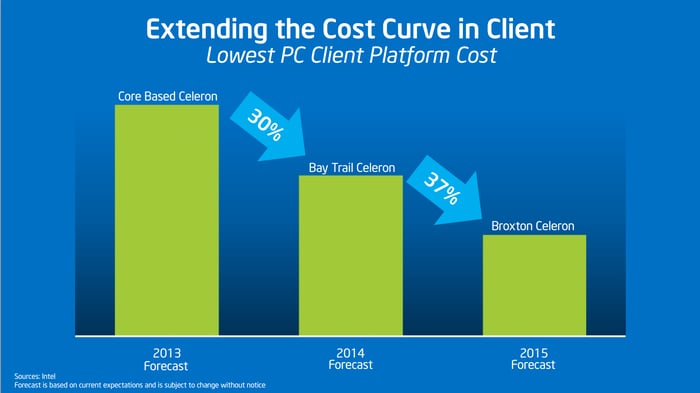 What about Cherry Trail?
The above chart has Intel moving from the 22-nanometer Bay Trail to the 14-nanometer Broxton, completely skipping over Cherry Trail, the successor to Bay Trail in tablets, shown in Intel's most recent mobile roadmap. 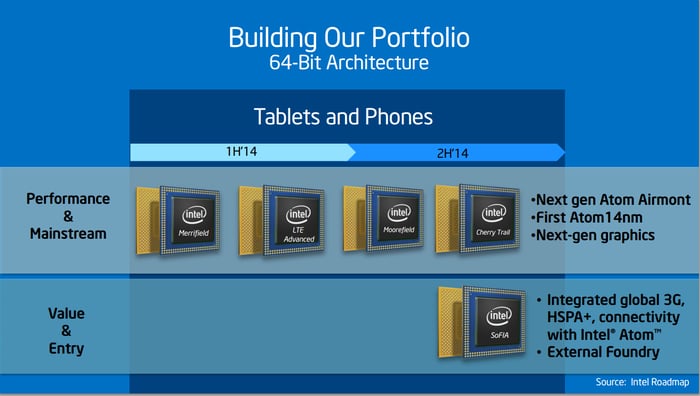 It's understandable that Intel would skip doing a Cherry Trail-based smartphone chip as the company attempts to accelerate to leadership with Broxton. But it has always been odd that Intel had implied that it would be skipping over Cherry Trail for low-end notebook and desktop PCs. After all, Cherry Trail – from some of the leaked specifications thus far – seems like it would be a more-than-potent successor to Intel's current Bay Trail-M/D lines for low-end notebooks and desktops, respectively. It turns out that the company is indeed bringing out Cherry Trail-M/D.

The evidence is crystal clear
A website known as Zauba allows users to track products that are imported into and exported out of India. In doing a search for anything related to a potential Cherry Trail-M/D part, the following came up: 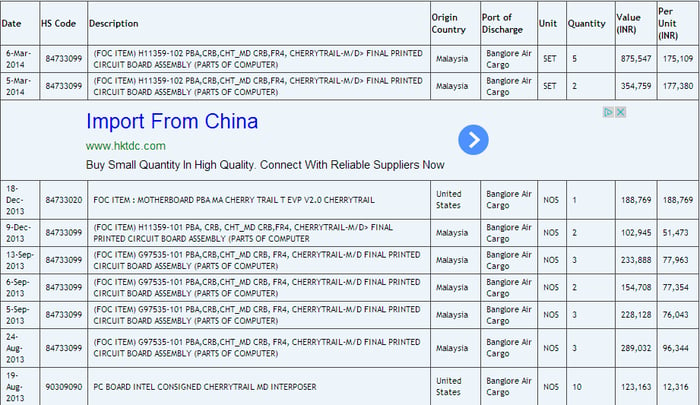 It looks as though Intel has every intention of bringing to market a 14-nanometer, Cherry Trail-based line of low-end PC processors. This is great news for Intel and its PC margins, as these chips should be extremely small and cheap to make. Unfortunately, it's not so fantastic news for Intel's weaker rival, Advanced Micro Devices (NASDAQ:AMD), particularly as Cherry Trail will not just be cheap to make, but will be extremely low-power and feature a significantly overhauled graphics engine.

AMD is stuck
Today, AMD competes at the low end against Intel's Bay Trail-M/D with a part known as Kabini. This is a 28-nanometer SoC based on the Jaguar CPU core and AMD's in-house Radeon graphics IP. While it offers higher graphics performance than Intel's part -- and roughly equivalent CPU performance -- it consumes a lot more power. In addition, Intel is building these chips on 22-nanometer manufacturing plants that have been paid for by the company's Ivy Bridge and Haswell generation of PC processors. AMD, on the other hand, needs to hand the foundry margin over to Taiwan Semiconductor (NYSE:TSM), which impacts its ability to engage in a price war profitably with Intel.

When Intel moves to 14-nanometer, the chipmaker will have roughly a two-generation manufacturing lead. That means Intel will be able to pack far more features into far less of a die area than AMD can at 28nm. Further, Intel's Cherry Trail is likely to neutralize or perhaps even reverse the graphics advantage that AMD currently enjoys, but it will be able to do so in a much tighter power envelope. It's just not a pretty situation for AMD, which makes it difficult to believe in an AMD share-maintenance story, let alone a share-growth story in PCs.

Foolish bottom line
AMD is doing the best it can, but the deck really is stacked against the company. With Intel aggressively fighting with Bay Trail-M/D today and with plans to transition to Cherry Trail-M/D presumably by the holiday season, can AMD's much-hyped Beema/Mullins really stand a chance?