Since it reported full-year 2013 earnings a couple of weeks ago, Abercrombie & Fitch (NYSE:ANF) has seen an over 14% climb in share price. Additionally, the stock recently received an upgrade from Credit Suisse to an "outperform" rating with a $52 price target.

Despite beating expectations last quarter, Abercrombie & Fitch still faces headwinds. Not only does the company compete with The Gap (NYSE:GPS) and numerous other brick & mortar retailers, but it also faces threats from online retailers like Amazon.com (NASDAQ:AMZN). Furthermore, Abercrombie & Fitch may be losing some of its brand identity as it tries to fit into today's retail environment.

How Abercrombie & Fitch really performed  in 2013
In the fourth quarter of 2013, the company's net sales dropped 12% to $1.3 billion while net income came in at just $66.1 million, versus $157.2 million in the same quarter of 2012. The drop in net income was exacerbated by restructuring charges related to the closing of the Gilly Hicks stores and other charges related to profit improvement initiatives.

However, Abercrombie & Fitch's earnings release had some positives.

Prior to the fourth quarter, the company was in the red since it generated only $54.6 million in profits for the entire year. Secondly, its online business accelerated. Online sales rose 11% for the year, but this figure was 18% for the fourth quarter, and this business currently represents 25% of all sales.

Lastly, on the conference call management stated that over 500 leases are up for renewal between now and 2016. Since the company currently has 1,006 stores worldwide, this means that it has ample flexibility to reduce its exposure to bricks-and-mortar trends and focus more on the online business. 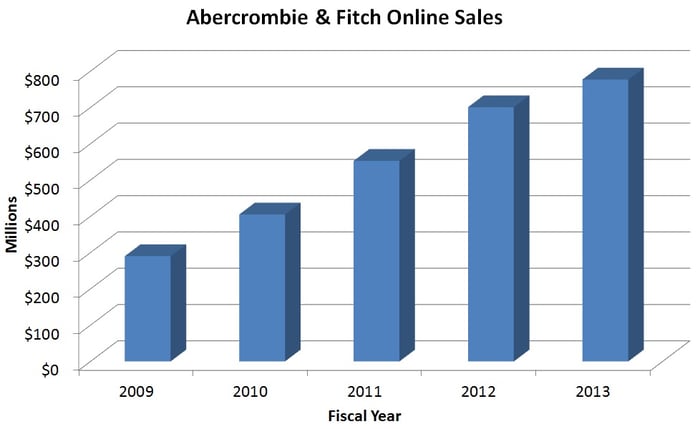 Does Abercrombie & Fitch have an identity crisis?
In January of this year, CEO Mike Jeffries was stripped of his title as chairman and the company added three new members to the board. Activist investment firm Engaged Capital still believes that the board lacks qualified leaders who can turn the company around. Whether new leadership was necessary or not, only time will tell if these decisions will have long-term payoffs.

Even before the management shakeup, the company reversed its marketing strategy and announced in November of 2013 that it will offer women's clothes in sizes above 10 at some point in 2014. Because the brand has always been marketed exclusively to young and fit customers, this is a huge shift in company philosophy.

Another topic discussed on the earnings conference call was the possibility of cutting prices on the merchandise in order to win back teen shoppers who have been choosing other retailers like The Gap or H&M. However, Abercrombie & Fitch also said it plans to cut its own costs for its clothing so that its margins will remain intact.

This plan introduces a couple of potential problems. First is the issue of starting a domino effect in which the company reduces prices throughout the year. If inventory still builds up and the company needs to sell the now-cheaper merchandise for even less, there is not much more room for further price cuts. Within the intense promotional environment, sales may be harder to distinguish from regular prices for customers.

The second issue is whether the company can maintain its margins. If Abercrombie & Fitch maintains margins, that means the quality of its merchandise will be reduced in some way -- either through cheaper materials or cheaper labor. This could hurt the brand over the long term and make consumers question what the company represents in regard to fashion.

Most recently, the company stated that it is in the process of remaking the Hollister stores in favor of a fast-fashion concept where new merchandise is rotated through the store more rapidly in an effort to attract customers more often. This move could backfire if it results in significant costs with little payoff.

Amazon.com  -- friend or foe?
Abercrombie & Fitch is one of several brick & mortar retailers that have been in discussions with Amazon.com. The current theory is that Amazon.com wouldn't sell Abercrombie & Fitch products directly, but it would provide listings that would link to the retailer's site.

As a result, Abercrombie & Fitch would see more traffic while Amazon.com would receive more customer data.

The real question is whether Abercrombie & Fitch even needs Amazon.com. The company has already generated growth in their online segment on its own. Because Abercrombie & Fitch would join other retailers that already pay fees to Amazon.com to drive their traffic as well as fees on the resulting transactions, the benefits of this move might not outweigh the costs.

Bottom line
Soon apparel retailers are expected to unload their winter merchandise at steep markdowns to make room for spring. This may add to the promotional-environment problems that plague Abercrombie & Fitch as well as The Gap.

There is a good chance that Abercrombie & Fitch has failed to change with the times as shoppers have moved on to newer trends and cheaper alternatives. However, there is a chance that its new identity might be the one that finally fits.