Serious investors must know the difference between great investments and speculative casino chips. These three stocks only qualify as gambles.

Great investments can be risky. But that risk is always balanced by an outsized potential return, dampened by strong fundamentals, and ultimately defused by strong management with a vivid and long-term business plan. There's no such thing as a safe bet, but many of the best wealth-creating investments come very close. In the long run, making a number of these low-risk investments will set you on the path to long-term riches.

And then there are the poker chips masquerading as investments.

Does this look like a hotbed of solid investing to you?

Stay away from these at all costs. When obvious risks gather over your chosen ticker, and don't have the advantage of terrific management, solid financial footing, and reasonably strong returns, you're better off just buying a Dow Jones ( ^DJI ) tracker ETF fund instead.

Let me show you a few examples of what to avoid. Spoiler alert: turnaround plays are notoriously difficult and rarely worth the risk.

BlackBerry ( BB -3.66% ) led an unsuspecting world into the smartphone era with a bevy of secure, reliable, and beautiful keyboard-equipped handsets. Before Android vs. iPhone, it was all about the CrackBerry, so nicknamed because of its addictive effect on early adopters.

But the Canadian company missed the boat when smartphones grew into the consumer space, and then the rot spread into BlackBerry's traditional corporate market as well. Now BlackBerry has lost all credibility as a smartphone provider, the stock has lost 93% of its value in six years, and heads have rolled in the executive suite. Meanwhile, the Dow gained 44% -- and that includes the bloodcurdling 2008 crash. 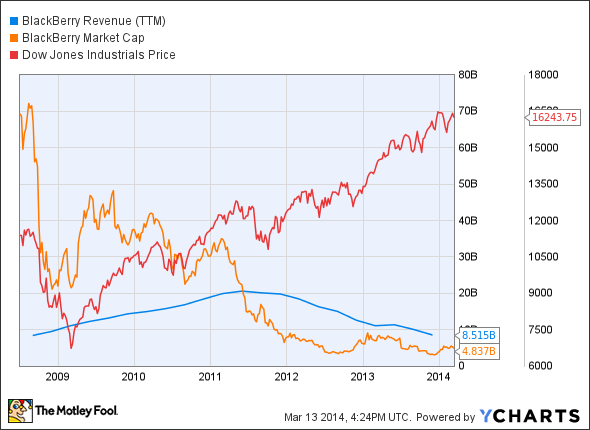 It may seem tempting to pick up some BlackBerry shares on the cheap, hoping for a rebirth in secure messaging software or maybe patent-wrangling lawsuits. Feel free, but don't call it an investment.

Even new BlackBerry CEO John Chen might agree. He recently said that his turnaround efforts have "a 50/50 chance" of getting the company back on track. If that doesn't happen, the stock can still fall much further.

Chen's levelheaded realism is the one thing that BlackBerry has going for it these days. If even he admits that he's basically running a gamble on a grand scale, why should investors feel any different?

VirnetX ( VHC 0.37% ) is a very different beast. BlackBerry knew success firsthand but lost it. VirnetX is still trying to make its first splash, in a lawsuit-powered strategy with very little business substance.

The company holds about 50 U.S. and international patents on aspects of data security. The big dream is to make billions as 4G mobile networks allegedly must use VirnetX security features -- for a fee. On that basis, the company has sued a number of tech giants in the hopes of a big payoff, or at least some major settlements. A couple of court decisions have gone VirnetX's way, but only one settlement so far has resulted in a cash payment.

So VirnetX keeps knocking on courthouse doors (mostly in notoriously litigant-friendly Tyler, Texas), while its much bigger and richer targets prefer to appeal their losses rather than paying up. Tech industry targets stand united in believing that VirnetX's claims are hogwash.

Meanwhile, VirnetX burned $27 million on the bottom line last year on record revenue of $2.2 million. There's no genius management going on here -- the company is racing against the clock as that single settlement is paying for operations four years later, and that imagined payoff looks like a huge mirage.

Again, gamble with VirnetX all you want, but don't call this an investment. This stock can't hold a candle to the Dow. 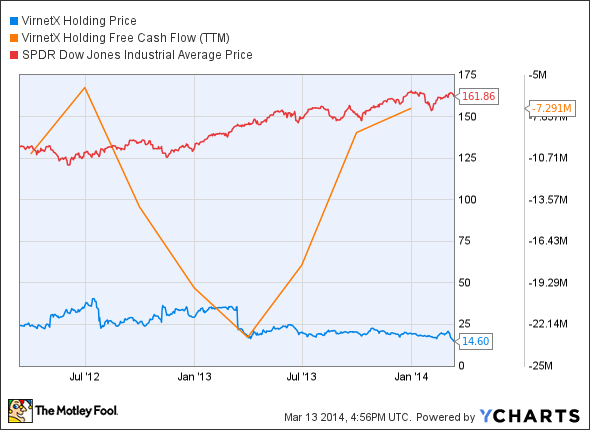 Let's end this with a dead retailer walking.

RadioShack (NYSE: RSH) seemed to be marked for the graveyard in 2008. The electronics seller still had cash reserves and a positive net margin, but sales were in a freefall. The stock had lost about half its value over a three-year span, and already earned a shameful one-star rating in our CAPS system.

The rise of online commerce continued to take its toll on RadioShack, but somehow the death blow never landed. Until now.

The struggling retailer is closing 1,100 stores, reducing its physical footprint by about 20% in one fell swoop. The chickens are coming home to roost. Once worth more than $12 billion, RadioShack's market cap is down to just $220 million.

If you want to bet on a turnaround from this level, you're a braver card shark than yours truly. This is the kind of unstoppable death spiral that even a world-class turnaround genius couldn't stop. The financial platform is nonexistent and I'm not sure that there's a future for mall-based retail specialists anymore.

Once more, RadioShack investors would have done far better with a simple Dow tracker, such as the SPDR Dow Jones Industrial Average ETF ( DIA -0.11% ). And there's no reason to believe that RadioShack will return from the brink this time. 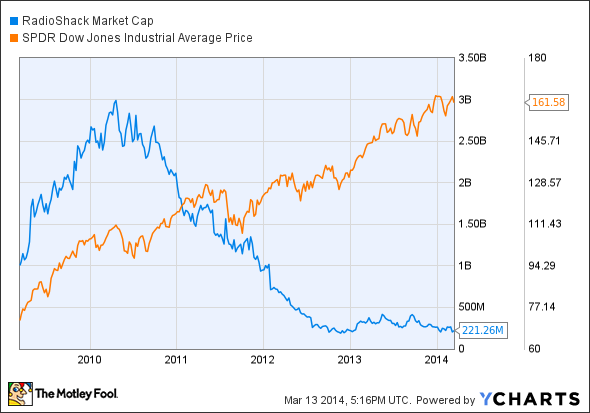