The recent bankruptcy of Mt. Gox curbed the staggering rally of bitcoin. This recent controversy raised the debate over the validity of bitcoin. Despite the securities issues related to this currency, the current price of bitcoin remains high, at more than $600. After all, the virtual currency offers some advantages over regular money, such as instant money transfers with few, if any, regulations. But considering bitcoin as an investment, is it the new gold -- a substitute investment against the potential devaluation of the U.S. dollar? I think there are three reasons bitcoin isn't the new gold.

The chart below shows the sharp rise in the price of bitcoin in the past six months. At one point, bitcoin passed the $1,000 mark. Since then, however, its price came down to the $600-$900 range. 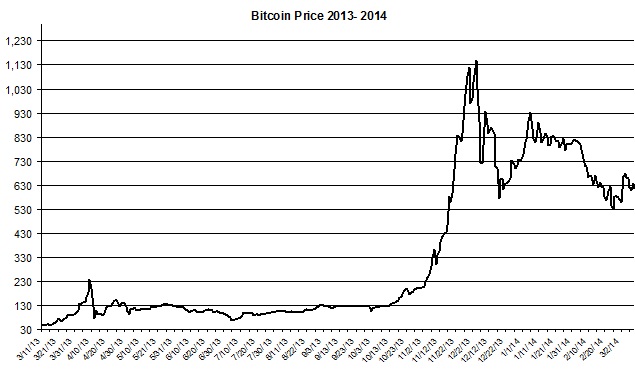 One of the reasons for the drop in its price is the security issues related to bitcoin.

1. Security issues
Besides the latest Mt. Gox controversy, bitcoin has had its fair share of security issues, including heists. But even users of PayPal, a global online money transfer company, which is fully owned by eBay (NASDAQ:EBAY), have faced scams. The main difference is that PayPal has ample funds to invest toward improving its security. Just in 2013, the company brought in $6.6 billion in revenue for parent company eBay. This provides cash for investing in security and keeping PayPal from facing security breaches.

This kind of security risk is less common in gold, because it is mostly traded in the Chicago Mercantile Exchange, which isn't as heavily used as PayPal is. Moreover, gold trading is very limited to a few exchange markets and is heavily regulated  so that heisting gold derivatives is as likely as robbing Apple shares. The recent breach in Mt. Gox is still unclear but some analysts suspect the security breach was in  bitcoin's protocol: Hackers were able to deceive Mt. Gox's software into assuming transactions didn't go through. It's unknown how much Bitcoin inventors and exchange companies such as Bitstamp, the world's largest bitcoin exchange, invest in the currency's security. But the recent collapse of Mt. Gox suggests the virtual currency's level of security isn't enough. Furthermore, such publicity is likely to impede bitcoin's broader acceptance. Besides security issues, bitcoin remains a risky investment .

2. Riskier than U.S. dollars or gold
The risk of the potential devaluation of the U.S. dollar has increased in the past several years, mainly after the 2008 financial meltdown. These circumstances resulted in a shift toward safe-haven investments such as gold. The shift in market sentiment toward risk aversion was also accompanied by the Federal Reserve's decisions to purchase long-term securities, which resulted in an increase in the U.S. monetary base. These factors enabled the price of gold to reach $1,900 back in 2011. Gold enthusiasts tend to use SPDR Gold (NYSEMKT:GLD) to invest in gold. And up until the middle of 2012, the price of gold and SPDR Gold rallied. Since then, however, gold and SPDR Gold haven't performed well as the market sentiment has slowly shifted back toward taking more risk.

But the Fed's ongoing policy to purchase long-term securities left fear of a potential rise in inflation. The inflation never materialized, but these circumstances raised the demand for alternative currencies such as bitcoin. But this currency remains very risky, which puts into question its value. For example, in the past year, the standard deviation of the daily percent changes of bitcoin's price was 7.6%. In comparison, during that time frame, the standard deviation of the euro/USD was 0.4% and USD/Yen was 0.4%. The standard deviation of the price of gold was 1.4%. This means bitcoin is much more volatile than leading currencies or gold, and even though bitcoin might be considered an alternative to the U.S. dollar, it's still much riskier. The last issue to consider is this currency's underlying value.

The takeaway
For now, bitcoin is still alive and kicking, even after the recent fall of Mt. Gox, which put a spotlight on one of bitcoin's main problems: security. This isn't the only problem bitcoin enthusiasts face, though. The currency's high volatility and lack of base value will keep haunting bitcoin investors.