The Dow Jones Industrial Average (DJINDICES:^DJI) pushed into positive territory by noon EDT Friday after dropping in morning trading . After enduring one of the worst days of the year Thursday, the landmark index seems content to finish out the week with minimal change from the opening bell. Things could look quite different by the end of the day, however, and the performance of the Dow's few standout components today could make all the difference between a sigh of relief and a wail of defeat on Wall Street. At the moment, only two Dow stocks are showing real signs of life with gains of 1% or greater, with Home Depot (NYSE:HD) behind only Boeing in early afternoon trading.

Home Depot was founded in 1978 and its first stores opened in the Atlanta area on June 21, 1979. Co-founder Bernie Marcus was so desperate for customers that he sent his children out with $1 bills to pay people to come in and buy something.

Within two years, the company had grown large enough to require an infusion of outside capital, so Home Depot went public in 1981 with a minuscule first-day market capitalization of roughly $35 million. Within a year the stock had grown by more than 300%.

A single share of Home Depot stock, bought the day after the company's IPO, would have grown to a hoard of 1,292 shares today worth more than $100,000. The dividends paid to these shares (based on Home Depot's latest dividend payout of $0.47 per quarter) would be enough to buy you in excess of 200 shares of Home Depot's stock at its IPO price of $12 a share.

Home Depot traded on over-the-counter exchanges until 1984, when it began trading on the New York Stock Exchange. By this point, the company had grown to operate 19 locations generating roughly $250 million in annual sales. Its shares were already up 1,000% from their IPO valuation, but the company went into overdrive at this point, and by the end of 1985 Home Depot had exploded into a 50-store operation generating more than $1 billion in annual sales.

Home Depot was the only non-tech company to join the Dow in the historically badly timed swap of late 1999. It is also the only stock of the four that has actually outperformed the Dow since that induction: 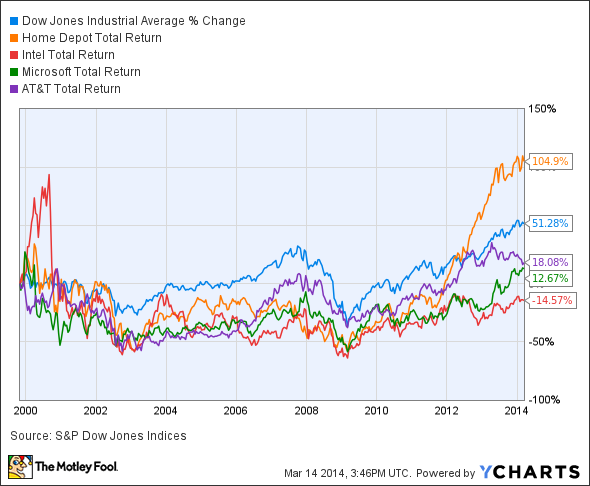 Home Depot has been a major Olympic sponsor, and its unique sponsorship model makes it one of the world's most prolific medal winners -- from 1992 to 2008, the company employed 600 Olympic contenders who combined to earn 145 Olympic medals.