Please ensure Javascript is enabled for purposes of website accessibility
Free Article Join Over 1 Million Premium Members And Get More In-Depth Stock Guidance and Research
By Lee Samaha - Mar 14, 2014 at 7:00AM

Wal-Mart announced that it's investing more in small stores and this got investors in Family Dollar excited, but are the dollar stores the real target of Wal-Mart's move? Also, are TJX and Ross Stores relatively safe from competition?

If you had a dollar for every time an analyst speculated over what would happen if Wal-Mart ( WMT 1.51% ) decided to target a certain market, then you would have enough money to buy a Family Dollar ( FDO.DL ) store outright instead of fretting over encroaching competition. The dollar stores do look like they could see Wal-Mart muscling in, so investors looking for another way to play the value segment of retail might consider Ross Stores ( ROST -0.34% ) or TJX ( TJX 0.63% ) instead.

Wal-Mart targets the dollar stores, or does it?

By now, most investors will be aware of Wal-Mart's recent announcement in which the company states that it intends to double its planned small-store expansion to 270-300 stores, from an initial target of 120-150. Essentially, this is seen as Wal-Mart taking direct aim at the dollar stores, especially given Wal-Mart's undoubted purchasing power and reach.

This is an interesting development from Wal-Mart but not an unusual one, because the company appears to be following a similar strategy of small store expansion in the UK. In fact, Wal-Mart's fully owned supermarket chain in the UK, Asda, plans to spend more than $1.2 billion on new stores in the UK with a large focus on the new small-store format. However, this move is seen more as an attempt to take advantage of the local grocery market than a move aimed at the UK equivalents of the dollar-store format.

No matter, Dollar General, Family Dollar, and Dollar Tree are all companies with metropolitan presences, and they all seek to sell consumables in order to drive traffic. In other words, it's hard not to see how Wal-Mart could hurt them collaterally in the future.

Why doesn't Wal-Mart just buy a dollar store?
Inevitably, there has been a lot of speculation that Wal-Mart might just buy a dollar store like Family Dollar. Indeed, an analyst from Credit Suisse, Michael Exstein, has been arguing that a deal would make good sense. Furthermore, Foolish investors already know that Family Dollar has a lot to do in 2014, particularly with regard to sorting out its merchandising strategy after two poor years.

In addition, Family Dollar's under-performance would provide Wal-Mart's management with an opportunity to release the inherent value in the stores. On the other hand, it's not clear that Wal-Mart is necessarily targeting the dollar stores. Also, such a move would require a lot of management time and resources which could otherwise be used in an attempt to grab market share in the local grocery markets.

Why The TJX Companies and Ross Stores are relatively immune to this
TJX Companies and Ross Stores were both sold off in anticipation of a difficult Christmas period for retail. Indeed, TJX recently disclosed that it "made a strategic decision to price our merchandise aggressively in the very promotional selling environment and deliver extreme values."

Meanwhile, Ross Stores had already warned the market in December that it was facing "the most intensely competitive and promotional holiday selling period in recent years." Throw in the ongoing bad weather, and it's not hard to see why the market got pessimistic. A quick look at these companies' same-store sales growth numbers reveals the toughness of the Christmas period. 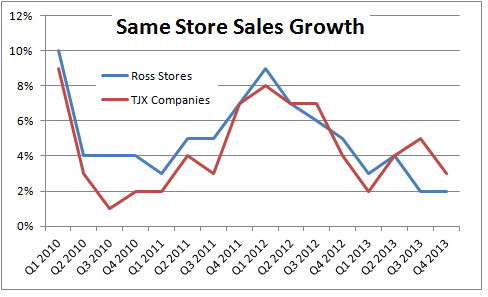 However, part of the slowdown in the fourth quarter related to the unusually cold weather and a shorter selling season over Christmas. While no business is completely free from competition, the off-price retailers present a compelling case that they have their very own niche in the retail sector. It takes years of experience to manage an off-price retailer and get inventory purchasing decisions right. Indeed, Family Dollar faced issues in 2012 when it tried to increase sales with its value clothing category. The off-price business is also a market where established retailers will want to avoid visibly expanding because they might run the risk of cannibalizing their full-price offerings.

The bottom line
In conclusion, Wal-Mart's move offers a threat to the dollar stores, but it's far from clear if it targets them or local grocers. The evidence from the UK suggests that the latter are Wal-Mart's likely target. Nevertheless, the dollar stores may suffer because they have been increasingly selling food and consumables. Investing Fools who are looking to avoid the dollar stores but who still want to invest in the discount end of the retail market might want to look at the off-price retailers instead. Competition is always tough in retail, but these companies look relatively better-placed.