It's official: Amazon.com (NASDAQ:AMZN) is hiking the price of its Prime membership from $79 to $99, and now consumers have to decide whether it's worth it to cut the Prime cord.

I can see how getting two-day shipping and streaming video for $99 per year will still be worth it for millions of consumers, but I don't happen to be one of them. Seventy-nine dollars was a stretch and, though Prime was a convenience for me, it's not worth another $20 per year. Here's why I'm dropping Prime and a few questions consumers are going to have to ask themselves.

Prime has been a key driver of Amazon shipping more boxes like this one to customers.

Why I'm no longer Prime
One of the great things about Amazon is the incredible selection and low prices on millions of obscure items you don't need to shop for every day. Amazon's not great for buying toilet paper or soda, but it is great for finding calculator batteries, hard-to-find DVDs, or bulk packages of 5-Hour Energy. But what I've found is that these purchases aren't usually needed in two days. They could arrive in a week or longer if I don't have to go to the store and search for them myself.

With Prime, I could buy these items whenever I wanted and get them quickly. Without Prime, I'll bundle these items together and make one purchase every month or two that costs more than $35 and get free shipping anyway. And if I need an item today, I have to go out of the house to get groceries and laundry detergent anyway, so I'll just add it to the list.

The other reason I won't miss Prime is the large number of items that are no longer Prime-eligible. As third-party sellers have expanded their reach in the Amazon store, I've noticed a lot more low prices and high shipping costs on items I'm interested in. Prime has a lot of items, but not everything on Amazon is Prime.

Hulu and Netflix have infiltrated most mobile and set-top devices, but Amazon's absence from Apple TV is a deal breaker for me.

Finally, I don't need Amazon streaming video, and I don't think most consumers would miss it if they have Hulu or Netflix. There's no doubt that Amazon has improved its offerings in the last year, but beyond the first five or six most popular movies, there aren't many titles that draw my interest, and almost every one of those is already on Netflix. Combine that with the fact that Amazon Instant Video isn't on Apple TV and I simply don't use it enough for it to add any value to my subscription.

This could be a boon for Amazon
Amazon will lose some Prime customers, like me, but what will be key to watch with Amazon is how many consumers stay. Estimates put the additional revenue from the $20 price hike at $374 million per year, which isn't chump change, even for Amazon. It could even swing the company back to profitability, although increased content costs may eat up most of the price hike.

There is downside for Amazon
The danger is that a significant number of people leave Prime and take their online purchases elsewhere. Since 2005, Prime has helped drive growth in excess of 20% at Amazon. If a large number of customers cut Prime or membership numbers don't grow, that rate could fall. 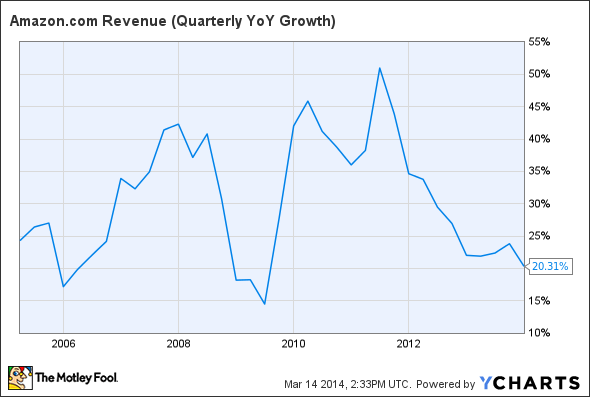 Risking growth isn't insignificant for Amazon, because the market allows Amazon to operate without a profit because it assumes the company will continue to grow rapidly for years to come. If a wrench is thrown into that thesis, the stock could be crushed.

Foolish bottom line
Raising the price of Prime is a risk for Amazon, and only time will tell if it's worth the extra cost for most consumers. There's no doubt that most consumers will stay with Prime, but if even 10% leave, it'll hurt Amazon. Count me as one of the customers who won't be paying the extra cost.