If you're worried about the dangers of enlisting, you should think about how dangerous these alternatives are -- and how much less job security you might have.

America loves its military. The vitriol heaped on returning Vietnam veterans in the 1960s and 1970s -- most of whom had no choice in the matter of their deployment -- caused such a public backlash that most Americans swung hard from anger to hero worship, and our default reaction to military service has been hero worship ever since. And why shouldn't it be? After all, no other profession explicitly asks its workforce to make the ultimate sacrifice.

However, just because military servicemen or servicewomen might someday be asked to die in service to their country doesn't mean that they will. In fact, modern military service isn't even America's deadliest job! There are certainly a number of serious factors to consider before joining the military, including the commitment to sign away at least four years of your life and the stress of essentially being on call 25 hours a day (that's not a typo) for your entire enlistment, but if the threat of death is your primary concern, you may want to dig into the realities of U.S. military casualties before making up your mind. 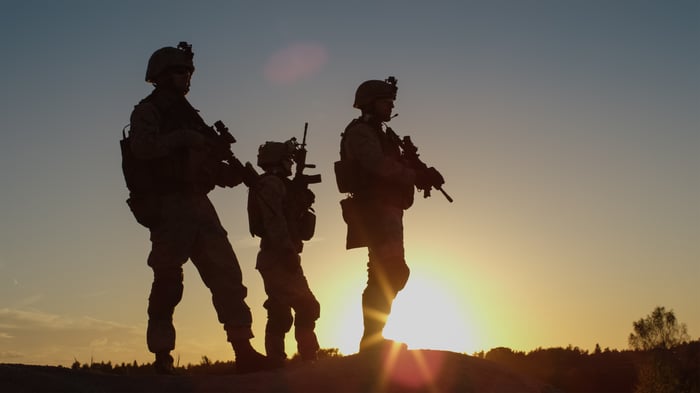 Can you keep the peace and keep your life?

Make no mistake -- people can and do die during military service. The Defense Manpower Data Center, one of the Department of Defense's analytical groups, has recorded 48,834 military personnel deaths from 1980 to 2010, which works out to 1,575 deaths per year. However, the American military is a huge organization, which has never slipped below 1.35 million active-duty servicemembers in any given year across all branches. There were 1.7 million active servicemembers on average per year from 1980 to 2010, and when you add in the full-time equivalent service hours of reserve forces, the United States has fielded nearly 1.9 million full-time equivalent servicemembers each year for the past three decades.

Because enlistment figures fluctuate from year to year, assessing military casualties based on the rate of death per 100,000 serving each year gives us a more consistent picture of the dangers faced by our servicemembers. Over these three decades of tracking, 82 servicemembers per 100,000 have died each year to all possible causes, and the leading cause of death is probably not the one you'd most suspect: 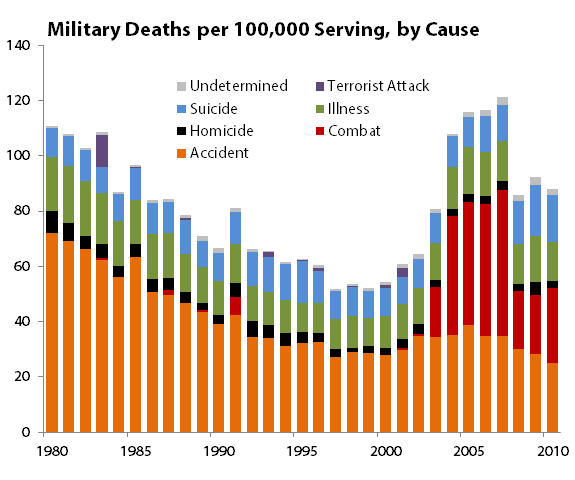 Accidents are by far the most consistent danger to military personnel, surpassing all other causes of death in every year tracked except the five (2004 through 2007 and 2010) most identified with major actions in Iraq. In fact, before 2002, the U.S. military endured only two years (1987, when an Iraqi jet attacked the U.S.S. Stark, and 1991, during Operation Desert Storm) of combat-related casualties in excess of one servicemember per 100,000. Accident-related deaths, on the other hand, while in decline since 1980 (reaching a three-decade low of 25.2 per 100,000 servicemembers in 2010), still account for the lion's share of all military deaths, and have been responsible for an average of 40.8 deaths per 100,000 servicemembers per year since 1980.

But serving in the military isn't even the most dangerous job in America, even if we focus only on the period after the opening of these two combat theaters. Would you like to know what's more dangerous than military service? 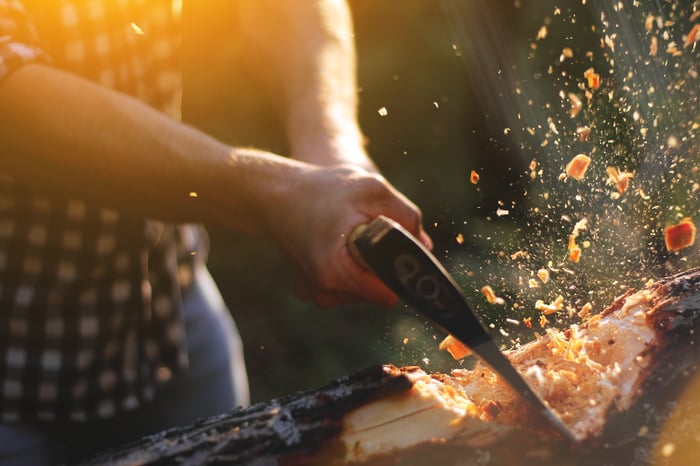 The high death rate of fishermen (or fisherfolk, if you prefer something gender-neutral) might not be so much of a surprise, as this is a profession that has a reality show -- Deadliest Catch -- that tells you it's dangerous right in the title! The military's annual death rate only surpassed that of the fishing industry in 2007, and its three-decade average death rate is nearly 35 personnel per 100,000 lower than it is for fishing.

If you're looking for job security and personal safety, you'd actually be better off joining the military than working as a lumberjack or in the fishing industry. Military service will -- unless you do something horrendously improper -- guarantee at least four years of pay, which should generally be at least $20,000 per year (pay grade E-3, which is a private first class in the Army or a seaman in the Navy, pays $21,700 per year), much of which will be take-home because of general military policy of providing room and board to servicemembers. Loggers, on the other hand, make a median salary of only $33,600 per year, nearly identical to the $33,400 median salary in the fishing industry. The logging industry is expected to see a 9% decline in its employment numbers by 2022, and the fishing industry is expected to lose 5% of its workforce during the same time frame.

Nearly any military servicemember with career ambitions is likely to earn more than the median logging or fishing salary after several years, and some may even start off earning more -- the lowest pay grade for the officer corps (a second lieutenant in the Army or an ensign in the navy) equates to an annual salary of $34,900.

If you're still concerned about the risk of death in combat, keep in mind that the military won't have its boots on the ground in hostile countries all the time -- at least not as long as voters have a say in the matter and choose to elect less hawkish politicians. Even so, there were still several other jobs more likely to kill you than combat in the military during this period of global police action: 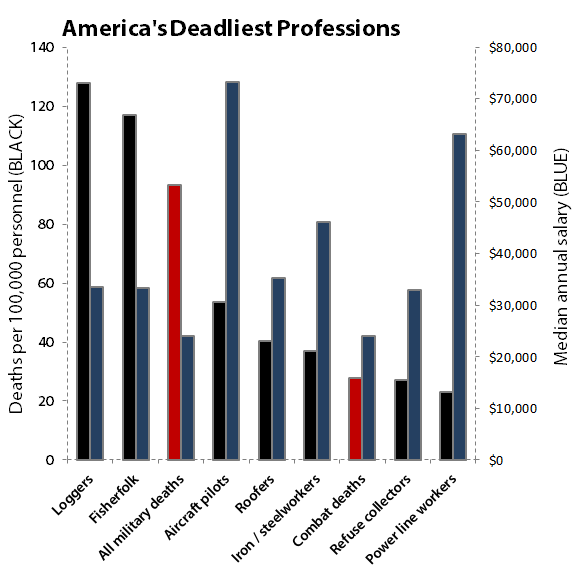 Sources: Defense Casualty Analysis System and U.S. Bureau of Labor Statistics.
*Note: military casualty rates are from 2001 through 2010 and pay grade used is E-4. Other occupational casualty rates and median salaries used from BLS data and are current through 2012.

No one should join the military expecting it to be a cushy cakewalk, but at the same time, it's worth keeping in mind that there are deadlier jobs with less job security than military service. There are plenty of other considerations as well. Military life can still be very dangerous, even if it's not deadly, and these casualty figures don't account for grievous but survivable wounds that can have lifelong impacts on a servicemember's life. However, barring another major conflict -- and since it took about 30 years for Americans to get over Vietnam before committing to another long-term fight in Iraq, it seems unlikely that the military will be plunged into a new quagmire any time soon -- we should probably expect military casualty rates to keep falling in the coming years.

Add Alex Planes on Google+, or follow him on Twitter, @TMFBiggles, for more insight into markets, history, and technology.

These 2 Stocks Are Making a Pop on Monday

Why Now Is a Great Time for You to Start Investing

5 Stocks That Moved the Market in January
413%