Everyone knows Warren Buffett is filthy rich -- but how exactly did he do it?

Warren Buffett's investing style has evolved over the years. Early on, he looked for beaten down businesses, or "cigar-butts." Then, there was a period of great business for good prices. And now, we're seeing Buffett shift toward wonderful businesses for fair prices.

There's one thing, however, Buffett has never budged on. He's always been more interested in steady growth and capital preservation than exciting high-growth stocks. And if you were to ask any investment advisor how to accomplish this, I'll guarantee you'll hear "diversification."

According to Warren Buffett, that's a mistake. Buffett and his investing team defy a number of investing norms, but none more so than then Berkshire Hathaway's (NYSE:BRK.A) (NYSE:BRK.B) lack of equity diversification.

Warren Buffett
At the end of 2013, Berkshire Hathaway's portfolio was valued at approximately $118 billion -- $14 billion of which is handled by Warren's lieutenants, Todd Combs and Ted Wechsler. Even so, Buffett's "big four" make up an extraordinary 55% of the portfolio.

Charlie Munger
Munger, Berkshire's vice-chairman, doesn't actively manage Berkshire Hathaway's portfolio. He is, however, heavily involved in the inner working of Berkshire, and a big part of the attitude that defines the Berkshire's culture. And we could assume Munger, if given the role, would invest similar to Buffett. Luckily, though, we don't need to assume.

Munger manages Daily Journal Corporation's (NASDAQ:DJCO) $119 million portfolio. And since it's a publicly traded company, we can easily see his opinions on diversification.

Todd Combs and Ted Wechsler
Combs joined Berkshire in late 2010, and Wechsler followed the next year. Before coming to Berkshire Hathaway, both men managed their own hedge funds. And, not surprisingly, both created concentrated portfolios. 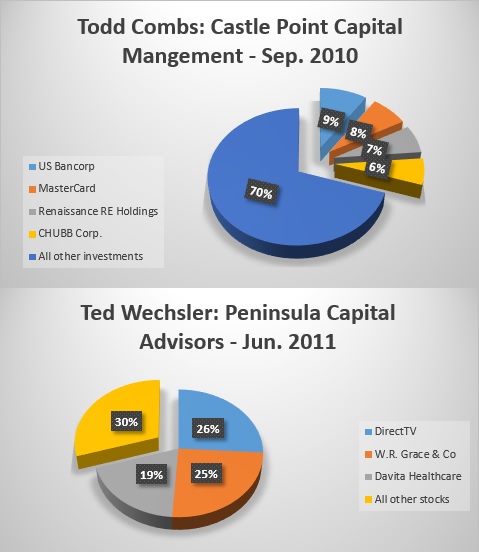 Combs portfolio looks incredibly diverse compared to the group. Though, with just 24 stocks in total, and 78% in the top 13, it's still fairly concentrated by most standards.

More importantly, how is their strategy affecting Berkshire Hathway? Buffett jested in his letter to shareholders that Combs and Wechsler not only beat the S&P 500 in 2013, but their investments topped his, "by a lot."

While this is great advice, Buffett did throw an amendment into this statement. He suggested unless you're going to bring an intensity to evaluating businesses, you're better off betting on the U.S. economy, and buying a low-cost index fund. In that case, extreme diversification makes perfect sense.