Emerging markets have been quite volatile lately due to currency instability and other economic concerns. However, short-term uncertainty usually creates opportunity for long-term investors, and companies such as Las Vegas Sands (NYSE:LVS), MercadoLibre (NASDAQ:MELI), and Yum! Brands (NYSE:YUM) are remarkably well positioned to benefit from growing consumption in emerging markets for decades to come.

Las Vegas Sands is a smart bet
Macau is the only region in China where gambling is legal, and Las Vegas Sands is one of the only six companies with licenses to operate in the region. Not only that, but the company owns a leadership position in the lucrative Macau Cotai Strip, and it plans to continue expanding aggressively in that market in the medium term.

Las Vegas Sands plans in late 2015 to inaugurate the Parisian Macau, its fifth property on the Cotai Strip and its sixth in Macau; this will add 3,000 rooms to its portfolio in the region. The fourth and final tower of the Sands Cotai Central is expected to be inaugurated in the fourth quarter of the same year, adding 700 additional hotel and apartment units to its presence on the Cotai Strip. According to management, Las Vegas Sands will own 44% of the market with 16,677 rooms by the end of 2017.

Gambling revenue in Macau remains remarkably strong, with an increase of 40% to a record $4.8 billion during February, so a slowing Chinese economy doesn´t seem to be much of a problem for casinos in the region.

Las Vegas Sands is also exploring opportunities for expansion in countries such as Japan, South Korea, and Vietnam, where the company is strongly positioned to compete for new development projects as a leading operator with plenty of experience in Asia. 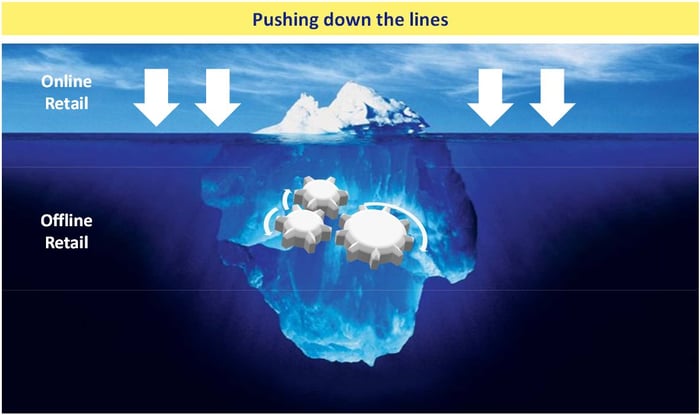 Management estimates that online commerce currently accounts for less than 3% of all retail transactions in the region, and that there is room to double or triple that market only by getting to the same level of penetration as countries such as China or the U.S. have in their respective regions.

eBay owns nearly 18% of MercadoLibre, and the companies share many aspects when it comes to business strategy. Similar to what eBay has done with PayPal, MercadoLibre is expanding MercadoPago beyond its marketplace operations to become a digital payments platform with its own growth opportunities as an independent business.

Economic problems and currency devaluations in countries such as Venezuela and Argentina are creating headwinds for MercadoLibre lately. But the company is still generating extraordinary performance for investors: Revenue during the fourth quarter of 2013 increased by an explosive 29.8% versus the year-ago quarter on the back of a 29.9% increase in gross merchandise volume and an even more impressive jump of 42.1% in payments volume.

It's hard to tell how economic difficulties in Latin America may affect MercadoLibre in the coming quarters, but the company stands to benefit from extraordinary growth opportunities over years to come.

A new year in China for Yum! Brands
Yum! Brands has successfully built a leading presence in emerging markets in recent years, and the company seems to be making progress in recovering from the negative impact produced by controversy over the poultry suppliers in its Chinese KFC operations in December 2012. In the words of CEO David Novak, "We know we still have some work to do but we're confident we're making progress with consumers and are pleased with the continued same store sales improvement we're seeing so far."

Management forecasts earnings per share to increase by at least 20% during 2014, and acceleration of growth in China is most likely one of the main drivers in that assumption.

The company ended 2013 with more than 5,800 stores in China among its three brands: KFC, Pizza Hut, and Taco Bell. India is becoming another key market, with Yum! Brands planning to operate more than 730 locations in the South Asian state by the end of the year.

Yum! Brands is relying heavily on franchises for international expansion; this provides higher profitability and lower capital requirements for the company. Management expects to open at least 1,000 international units in 2014 outside of China and India, so Yum! Brands is firing on all cylinders in terms of global expansion.

Foolish final words
Emerging markets typically carry higher uncertainty and volatility than developed countries, but in exchange they offer superior potential for growth. Las Vegas Sands, MercadoLibre, and Yum! Brands are three solid alternatives for investors willing to accept the short-term risks in order to capitalize on the long-term opportunities.