News regarding the effects of Target's (NYSE:TGT) data breach continues to come out. While we don't know the total financial costs of the data breach, these updates relate to traffic patterns seen at Target stores following the breach. The reason you keep seeing these reports is because they're based on studies done by different companies, and they're done at different times – to see if traffic patterns are normalizing. Unfortunately for Target, traffic patterns aren't normalizing, at least not yet.

Wal-Mart recently reported weak sales, citing struggles for its target market -- the low-income consumer -- related to higher taxes, a food stamp reduction, and a lack of wage growth. Therefore, if these consumers aren't shopping at Target or Wal-Mart, where are they shopping? The answer is likely the dollar stores.

Investing in the right retailer
Target recently reported a fourth-quarter net income decline of 46% to $520 million year over year, with sales slipping 5.3%. Combine this with declining traffic due to the data breach and it looks like it's still too early to take a position in Target.

As far as the dollar stores are concerned, Dollar General might be the largest, but Dollar Tree (NASDAQ:DLTR) sells all products for just $1. This is going to attract consumers wherever it sets up shop, especially considering that the company's stores are often cleaner and more organized than those of its peers.

In the fourth quarter, Dollar Tree delivered a comps (same-store sales) increase of 1.2%. That might not sound terrific, but keep in mind that this was accomplished in a challenging consumer environment and during a time when severe weather affected results for most retailers. If you look at the big picture, comps improved 2.4% for fiscal-year 2013. Looking ahead to fiscal year 2014, Dollar Tree expects comps growth in the low-single digits.

However, Target still holds one advantage for some investors.

The Target advantage
If you're a dividend investor, then you're not going to consider Dollar Tree. Since it's still in a growth stage, it reinvests much of its capital in its business opposed to rewarding shareholders via dividend payments.

Additionally, if you look at dividend per share growth over the past five years, Target stands out in a positive way: 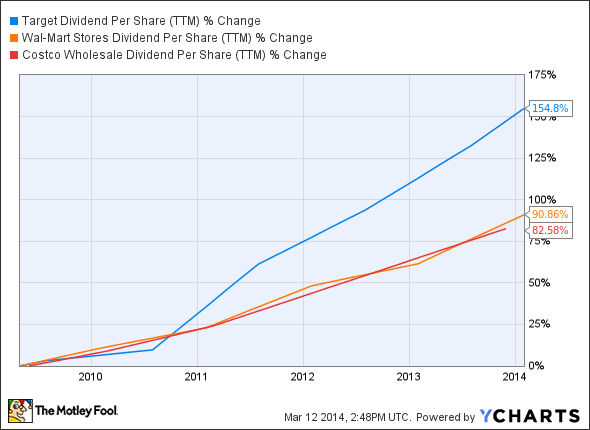 As far as top-line growth comparisons for all aforementioned companies over the same time frame: 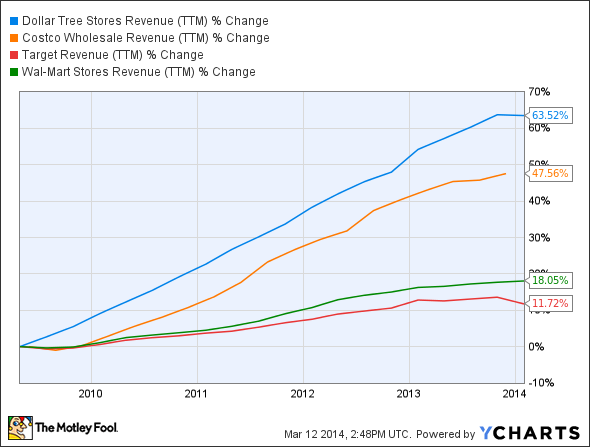 The Foolish takeaway
If you're looking for top-line growth, you might want to consider Dollar Tree or Costco. If you looking for dividend payments, you might want to consider Target or Wal-Mart. However, despite Target growing faster in this area and offering a slightly more generous yield, Target's recent traffic declines are cause for concern and could lead to stock declines prior to a recovery. Please do your own research before making any investment decisions.