With $45 billion in gaming revenue in 2013, Macau has proven itself over and over as the gambling profit-driver of the decade. Goldman Sachs research estimates that by 2017, those figures will climb above $70 billion. Most of this revenue comes from the hottest section of Macau, the Cotai Strip. One company has prepared itself to reap huge rewards from this area. 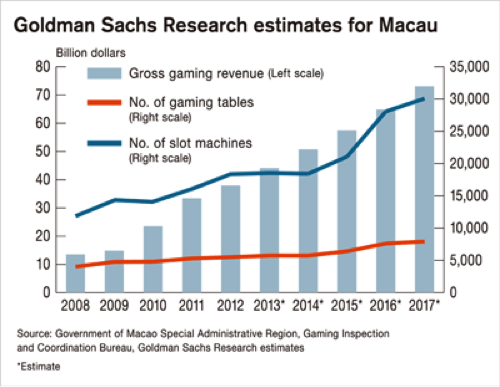 Las Vegas Sands (NYSE:LVS) reported that 86% of its global revenue in 2013 came from its operations in Asia. Macau casinos and hotels alone contribute close to 60% of the company's revenue, with most of the rest coming from Singapore. In its year-end results, the company reported that strong gaming volumes led to a 56% increase in Macau EBITDA as it brought in a record $888 million in the fourth quarter of 2013.

Company revenue increased by 16% to $3.66 billion, with earnings per share jumping 32% for the same period. Investors in the company have been heavily rewarded, as the share price has increased over 3,000% in the last five years.

Now that the company has seen such huge share price increases in recent years, does any room remain for growth? With increasing profits from Cotai, a new casino on the strip under development, increased profits from mass-market consumers, and what should be a pick up year in Singapore, Sands looks like a win in the coming years. 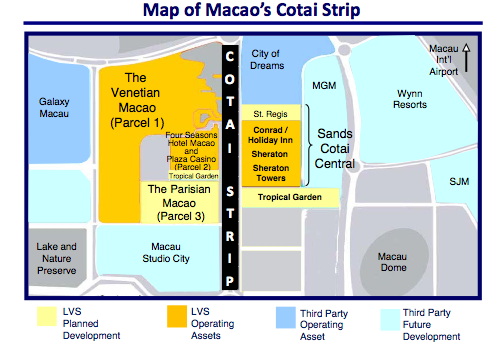 Sands continues to win in Cotai
The main area in Macau spurring new growth and profits is the Cotai strip, an area that is already becoming dominated by Sands holdings. Other companies, including Melco Crown (NASDAQ:MLCO) and Wynn Resorts (NASDAQ:WYNN) also plan development in the area. The area has seen near-constant development as casino companies build bigger and better resorts, most of which will open in the next year or two. The two casinos on the strip owned by Sands, The Venetian Macao and the Sands Cotai Central, have already posted solid growth and revenue. Sands Cotai Central for example reported a 61% jump in revenue and a more than 250% surge in operating income for 2013.

The Parisian promises to be an impressive resort with a 50% scaled Eiffle Tower. Photo: Las Vegas Sands

Sands is now developing its third attraction in the area. The Parisian, which will open in late 2015, promises to be even more spectacular than its two predecessors. This $2.7 billion Integrated Resort will include over 3,000 hotel rooms and suites, around 450 table games, 2,500 slots, a retail mall, and a replica of the Eiffel Tower at 50% scale. More property on the strip will mean more revenue. This is especially true as the number of mass-market gamers strolling the Cotai strip increases in the coming years.

Mass-market gamers mean mass profits in Macau, now more than ever
Casinos in Macau have traditionally focused on VIPs, the high rollers of the gaming industry. VIPs require perks like helicopters from Hong Kong to Macau as well as luxury suites. These perks can be expensive and they can drain per-player margins. 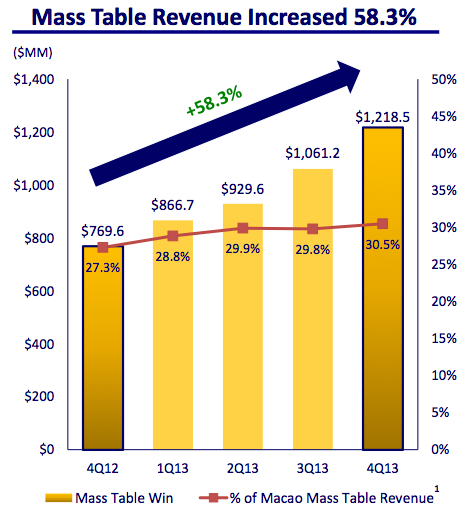 Mass market table revenue is up 58% for Sands in Q4 2013 over the same period last year. Source: Sands 2013 earnings presentation

However, new industry trends show that casinos can make more profit by focusing on mass-market gamers. This gaming segment provides higher margins for the casinos, and more players means more profits. More gamers will come to the island thanks, in part, to better transportation to Macau.

A new bridge between Hong Kong and Macau scheduled for completion this year will allow a gamer to drive across the bay to the casinos instead of taking a ferry or flying. Morgan Stanley estimates that in 2014 growth from mass-market gamblers will top 28% in Macau, while VIP gamers will see 13% growth.

However, Las Vegas Sands competes the most effectively for this segment. Over the last four quarters, Sands has risen above competitors in the market in terms of revenue driven by mass-market gamers. 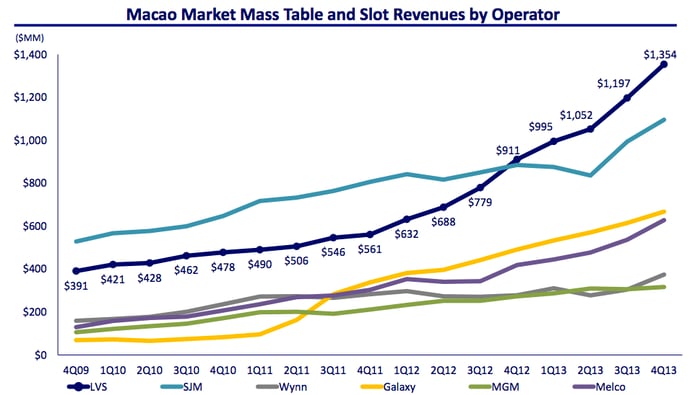 Sands is a winning bet on future profits from Cotai, but it isn't cheap
With massive gains in the past five years and an over 3000% increase in share price since spring 2009, Las Vegas Sands is not the cheapest buy in the market. However, with dominance of the Cotai strip, the new Parisian resort coming next year, and increased revenue from mass-market gamers in the coming few years, investors should feel bullish that Las Vegas Sands will continue to dominate in Macau.