Prior to its fourth quarter earnings release, I addressed some promising signs regarding Hanwha SolarOne (NASDAQ:HQCL) but, in the end, adopted a bearish view on the company. For the fourth quarter, the company posted a GAAP loss of $0.04 per share -- a marked improvement over the $1.27 from the previous year. But has the company done enough to allay investors' concerns, or is this still one to keep on the watch list? Shares have been on the rise over the year, outperforming the Guggenheim Solar ETF (NYSEMKT:TAN) and Market Vectors Solar Energy ETF (NYSEMKT: KWT). Is now the time to call Hanwha SolarOne a buy? Let's take a look. 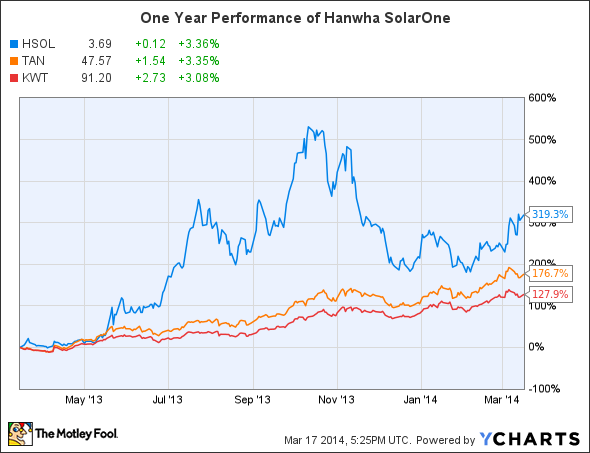 Clearing skies
After Hanwha SolarOne's third quarter earnings report, several questions surfaced regarding the company's performance. From the second quarter to the third, module shipments, revenue, gross margin, and operating margin had all dropped. The declining performance didn't continue into the fourth quarter; instead, all of those metrics showed substantial improvement:

One of the factors to which management credited the company's improved quarterly performance was the production of the E-STAR II cell, which management explained "further reduced cost from higher efficiencies and reduced material consumption." Important to the company's improving performance, according to management, is its operations in China. Quarter over quarter, Hanwha SolarOne increased module shipments to its second largest market, China, by 5%. Looking to the new year, it has a potential pipeline of 950 MW in China after recently forming several strategic partnerships. This isn't the only positive sign it sees for next year, though.

On the horizon
How else does the company foresee 2014 shaping up? In preparation for increased global demand, it is looking to further automate its module production by increasing capital expenditures from $70 million in 2013 to about $80 million for 2014. Expanding cell capacity to 1.5 GW and module capacity to 2 GW, the company believes that the increased automation will lower costs, improve quality, reduce material loss, and reduce labor costs -- all factors which will supposedly grow gross margins to between 15% and 20%.

One area of concern for the company is its debt. For the previous quarter, short-term debt remained stable, and long-term debt decreased by $8 million. Subtly addressing the concerns regarding its debt, the company claims that the $80 million in capex for the year can be funded through internally generated cash.

In advance of the fourth quarter earnings release, I had suggested that investors look for reference to the company's Zep-compatible solar modules, which are expected to be available in 2014; however, management did not provide any insight regarding development of the modules. Why is it so important? SolarCity, leader in the residential solar market, acquired Zep last October. Using PV modules from a variety of third-party suppliers, SolarCity is able to find the most cost-competitive modules and pass the savings onto its customers. There are a number of Zep-compatible modules on the market already from which SolarCity can choose -- modules produced by leading PV manufacturers like Trina Solar, ReneSola, Canadian Solar, JA Solar, and Yingli Green Energy. If Hanwha SolarOne wants to keep pace with some of the other industry leaders, it's imperative that they make themselves available to SolarCity.

Foolish final thoughts...
There were a lot of positive takeaways from the quarter, and the company's performance improved throughout the year; however I'm not convinced yet. For one, I'd like management to provide some insight regarding its Zep-compatible modules. Also, I'd like to see another quarter or two of continued, strong financial performance before I would consider looking to purchase shares.