As the airline industry has become more profitable in the last few years, investors have become impatient for airlines to return cash to them through dividends and buybacks. So far, JetBlue Airways Corporation (NASDAQ:JBLU) has been very cautious about returning cash to shareholders. Last year, the company bought back just $3 million of stock.

However, JetBlue sold its LiveTV onboard entertainment subsidiary to Thales Group for $400 million last week. The cash infusion will put JetBlue on a firmer financial footing. This should allow it to support its own growth while also aggressively buying back stock -- or even starting a regular dividend.

The new shareholder-friendly airline industry
Within the last year, several airlines, including Delta Air Lines (NYSE:DAL), Alaska Air (NYSE:ALK), and Southwest Airlines (NYSE:LUV) have started or significantly increased their regular dividends. Offering a dividend has become a way that airlines signal confidence in their long-term profitability.

Delta, Alaska, and Southwest have been among the most consistently profitable major airlines in recent years. All three have generated positive free cash flow every year since 2010. By contrast, other airlines like JetBlue and United Continental (NYSE: UAL) have not always generated positive free cash flow, either due to weak profitability or heavy capital expenditures. 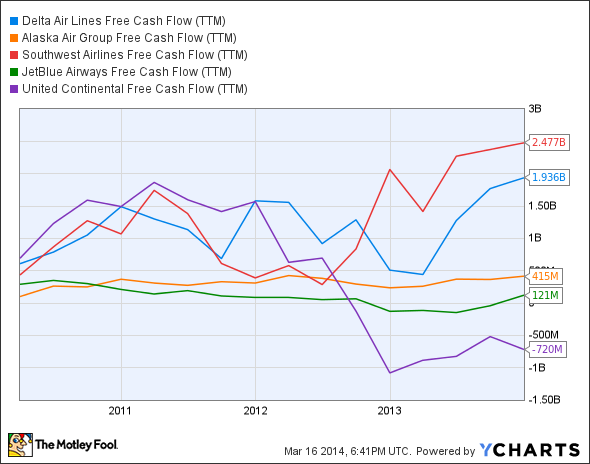 Simplifying the business
JetBlue's LiveTV business unit provides the in-seat entertainment system for JetBlue and several other airlines, as well as JetBlue's new fast Wi-Fi system. JetBlue's ownership of LiveTV has kept it on the cutting edge of the airline industry in terms of in-flight entertainment.

JetBlue has been a pioneer in offering live satellite TV on its flights. Photo: JetBlue.

However, JetBlue CFO Mark Powers told investors and analysts back in January that the company would consider selling or spinning off LiveTV as long as JetBlue could retain access to its technology. The deal announced last week allows JetBlue to do just that while pocketing $400 million (almost five times what it paid for LiveTV in 2002).

Additionally, JetBlue had planned to spend $75 million on capital expenditures for the LiveTV unit in 2014. Now, Thales Group will be responsible for making those investments. This will further improve JetBlue's cash flow going forward.

Ready to return cash
JetBlue has reduced its debt load by more than $500 million in the last two years, cutting interest expense and giving the company significantly more financial flexibility. JetBlue will be able to use the proceeds of the LiveTV sale to retire additional debt while continuing to invest in new Airbus aircraft for its growth plan.

With a more manageable debt load and improving free cash flow, JetBlue will be in a good position to start returning cash to investors in earnest later this year. Either JetBlue could choose to start paying a dividend in the near future or it could resume share repurchases -- the company has an open authorization to repurchase about 20 million shares of stock.

Either way, JetBlue's decision to sell LiveTV should allow it to quickly unlock value for shareholders. In recent years, JetBlue has had to devote much of its attention to solidifying its balance sheet. Going forward, it should regain the flexibility to return cash to shareholders while still investing in its future growth.