There was a time, back in the 1980s and 1990s when Carl Icahn enjoyed the reputation of "corporate raider," and the mere announcement of his interest in a company was responsible for many a spilled coffee cup in the handsomely appointed corporate boardrooms of the era. While Icahn's preferred method of value creation has shifted from leveraged corporate buyouts to playing the role of "activist investor" when he takes a stake in a company, he still plays to win. Having acquired a less than 1% stake in Internet commerce company eBay (NASDAQ:EBAY), the feisty billionaire investor is advocating for a spinoff of its fast growing PayPal payments platform.

Thanks but everything's fine over here
eBay, understandably, thinks PayPal's potential will be best reached by remaining within its operations.The company asserts that it has considered spinning off its payments arm, but it believes that PayPal and eBay are "far more valuable together." The major themes behind this belief were outlined recently via PayPal's blog (you can read the post, now on eBay's site, here). The company presented three reasons why it believes that a spinoff isn't an appropriate way forward. These reasons were also articulated during its fourth-quarter 2013 earnings call with analysts. Let's look at the arguments one by one.

1. eBay accelerates PayPal's success
The first argument -- that eBay accelerates PayPal's success -- is eBay's most cogent point. As part of eBay, PayPal gets a built-in customer base from transactions conducted on the company's Marketplaces platform, which includes the eBay.com auction and sales properties, online event ticket venue StubHub, and various advertising services businesses. The sum total of all payment transactions that PayPal facilitates is referred to by eBay as "total payments volume." Last year, PayPal facilitated $179.6 billion of TPV. Of this total, fully $54.4 billion of TPV came from eBay's Marketplaces platform. In its blog post, the company refers to eBay's "enormously valuable global customer base," and as far as PayPal is concerned, that's not an understatement.

Would spinning off PayPal mean foregoing a $54 billion transaction pool? Not immediately. eBay has spent the last 10 years since acquiring PayPal making it the preferred payment option for its customers, so even if eBay wanted to, it's not likely that it could or would make a quick transition to another payments platform should PayPal depart for the public markets. But the uncertainty over this 30% of PayPal revenue should be carefully considered by shareholders in evaluating the merits of a spin-off.

2. eBay data makes PayPal smarter
It's true that eBay data "makes PayPal smarter," but this thought process is most applicable to that 30% of transaction volume provided by eBay's customers. Sharing of data enhances PayPal's risk management, a selling point to merchants which CEO John Donahoe recently called "PayPal's secret sauce." Outside of this 30% base, however, eBay's data becomes less relevant. In fact, PayPal's robust risk management is seen by some as too cumbersome. Recently, upstart competitor Square eliminated holds and deposit limits in the U.S. and Canada for manually entered transactions, promising to deposit funds into merchants' accounts within 1-2 business days.  This directly challenges the risk management rationale behind PayPal's often long holds on merchants' funds, and appeals to companies that want their transactions funded immediately.

3. eBay funds PayPal's growth
While this statement is literally correct, it shouldn't concern the investor who's trying to decide whether he or she will benefit from a spin-off. eBay states that it provides a source of low-cost capital to PayPal. But PayPal has grown over the years to presently account for more than 41% of eBay's revenues. It's a significant contributor to cash on the company's balance sheet, so to some extent, eBay "provides" PayPal's own money back to it when it funds growth. As for debt capital, eBay's credit ratings, which determine its net debt cost of capital, are also partially a function of PayPal's success and contribution to the company financials.

If spun off, PayPal should generate adequate cash to fund its own growth if it approaches anywhere near the profitability of comparable transaction leaders Visa (NYSE:V) and MasterCard (NYSE:MA), which both enjoy quarterly profit margins north of 30%. As for equity capital, if PayPal finds success in life after eBay, it can float secondary stock offerings in future years to raise cash for acquisitions, should it see fit.

To give due credit to eBay, it does help fund PayPal's growth via profitability. While eBay Marketplace transactions account for 30% of PayPal's TPV, these transactions provide 50% of PayPal's profitability. This is likely due to the fact that PayPal has zero acquisition costs for Marketplace customers. eBay essentially provides the customers for free, dramatically reducing associated selling and general and administrative costs. My colleague Eric Volkman makes the case that this profitability is one of the major reasons eBay should keep PayPal under its wing. Still, if PayPal can grow its volume significantly as a dedicated stand-alone company, it can negate the outsized benefit of the higher-margin volume it currently enjoys from its eBay association.

Why eBay wants to keep PayPal
One of the eBay's strengths that investors undoubtedly find appealing is the company's strong and increasing cash flows: 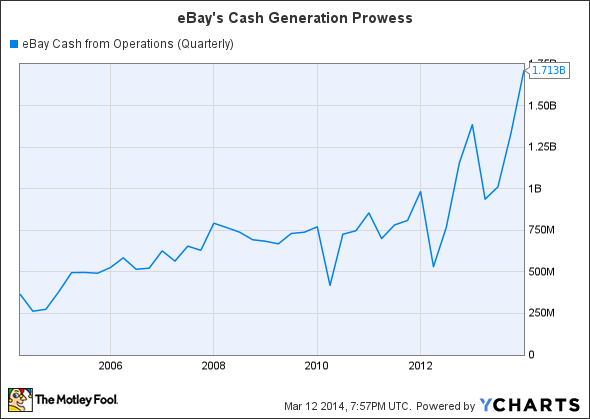 As you can tell, cash flow per quarter has been trending upward, which coincides with the rapid growth of PayPal relative to the rest of the company. In the last two years, PayPal's revenue has risen by 50%, to bring it to the overall 41% of total company revenues mentioned above. Management understandably doesn't want to spin off its fastest-growing segment, especially one in which the total market is colossal. After all, while the $179.6 billion of transaction volume PayPal sees in a year may seem like a large figure, as I wrote last year, competitor Visa enables $1 trillion of electronic commerce every business quarter.

The presence of strong cash flows associated with PayPal likely inform Icahn's thinking. Stable and increasing cash flows make valuing a stand-alone entity easier. Markets like streamlined business models, which are primed for long-term growth, and the visibility and potential for PayPal's future cash flows may ultimately outweigh the benefits of PayPal's current synergies with eBay.

A great recent example of a parent company letting a fast-growing segment go free is Expedia's (NASDAQ:EXPE) December 2011 spinoff of TripAdvisor (NASDAQ:TRIP). At the time of that transaction, Expedia had a market value of $3.75 billion. Twenty-eight months later, the combined market capitalization of Expedia and TripAdvisor -- two separate companies that still, it should be noted, transact a lot of business together -- stands at $24.8 billion.  As we've seen above, there are persuasive reasons for both a PayPal spinoff and simply maintaining the status quo, but given the market's appreciation for simplified, high-growth, high-cash flow spinoffs like TripAdvisor, can one blame Carl Icahn for being so eager to explore such a deal?