Sina (NASDAQ:SINA) Weibo, commonly known as China's Twitter (NYSE:TWTR), on March 14 filed for a U.S. IPO that could raise up to $500 million.

The IPO will allow Sina, one of the largest portal sites in China, to spin off Weibo as a new company. Sina currently owns 77% of the company's shares, while e-commerce giant Alibaba owns 18% with an option to boost its stake to 30%.

Weibo's upcoming IPO will likely remind investors of China's top search engine, Baidu (NASDAQ:BIDU), which soared more than 5,800% since its 2005 debut, or Twitter, which has nearly doubled since its IPO last November.

However, investors should also be aware of three steep challenges ahead for Weibo that could seriously throttle its growth and disappoint eager investors.

Weibo is a popular choice for international celebrities to reach out to fans in China. (Source: Author's screenshot)

The problem, however, is that Weibo's sequential growth in monthly active users has slowed down from double digits to single digits over the past year.

2. Tencent's WeChat is a disruptive threat
It might be premature to call that sequential slowdown a bottleneck, but Weibo's decline coincides with the rise of Tencent's (OTC:TCEHY) WeChat, an instant messaging app similar to Facebook's (NASDAQ:FB) WhatsApp. According to a recent report from the government's China Internet Network Information Center (CNNIC), 37.4% of Weibo's lost users switched to WeChat in 2013.

WeChat reported 379% year-over-year growth in global users in 2013 and currently has approximately 600 million registered users. WeChat has benefited immensely from two things -- the total number of mobile Internet users in China hitting 500 million (a penetration rate of 81%) at the end of 2013, and the widespread opinion that WeChat's chat, social sharing, and gaming network is more feature-rich than Sina's 140-character microblogging service. 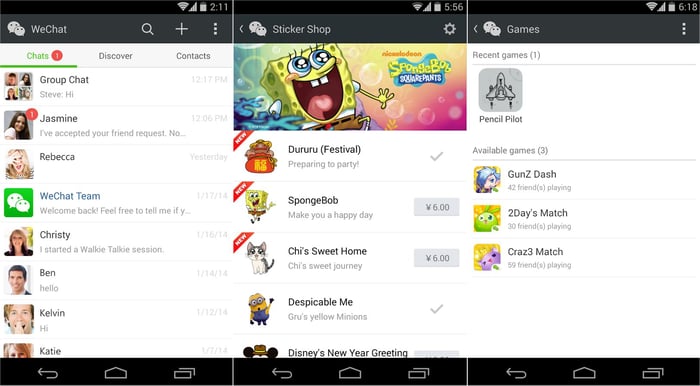 Asian instant messaging apps such as WeChat and Naver's LINE have notably built social networks out of mobile phone books rather than email addresses, subsequently expanding those networks through sticker stores, branded mobile games, and apps.

In other words, it turned the older social networking model used by Facebook, Twitter, and Weibo upside down and made it a native experience for mobile devices. Meanwhile, business leaders and celebrities in both Asia and western countries have opened WeChat accounts for fans to follow, since both Facebook and Twitter remain inaccessible from mainland China.

Weibo has struck back at WeChat with its mobile app, which currently serves 70% of its users. Unfortunately, Weibo's 140-character restrictions and its lack of WeChat's bells and whistles make it look archaic by comparison. However, one of Weibo's key strengths is its alliance with Alibaba, which uses Weibo's mobile app as an e-commerce platform.

3. It's expensive to maintain a Ministry of Truth
In 2013, Weibo's revenue climbed 186% year-over-year to $188 million, while its net loss narrowed from $102.5 million to $38.1 million. Weibo's partnership with Alibaba will generate $380 million in additional revenues through 2015, and the company currently has $246 million in cash and equivalents -- which means that the company will be on solid financial ground as long as revenue continues rising and losses keep narrowing.

Weibo has been hit hard by censors in the past -- messages regarding the government response to the 2008 Sichuan earthquake, the 2009 riots in Urumqi, and government's response to the 2011 Wenzhou train crash have all caused major friction between Weibo and the Chinese government. As a result, Weibo aggressively self-censors its own posts to avoid angering Communist Party leaders. 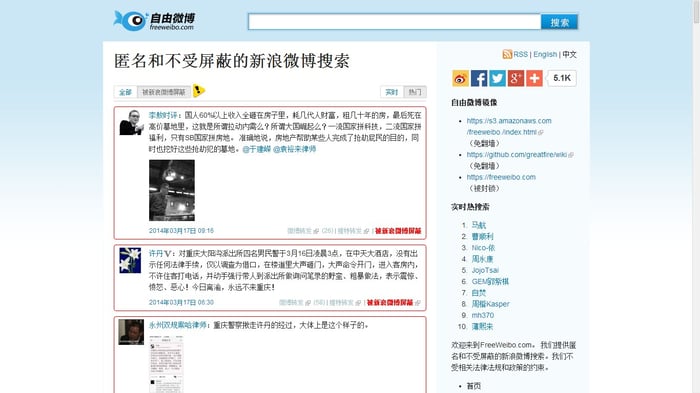 However, Weibo's Orwellian "Ministry of Truth" is expensive to maintain. As monthly and daily active users rise, so do the number of potentially inflammatory messages and the number of necessary eyeballs to regulate them. As a result, Weibo's total expenses soared 113% from $115.5 million in 2011 to $246.2 million in 2013.

In other words, Weibo's business model is the polar opposite of Twitter's. Whereas Twitter's free flow of information can be used as an instant, uncensored news feed, Weibo must ensure that its daily deluge of tweets are government approved, nullifying one of the core strengths of the microblogging platform.

WeChat also recently deleted 30 of its popular news accounts, according to the Wall Street Journal -- raising fears that the Chinese government is tightening its grip on "rogue" sources of information such as Weibo and WeChat.

Does a self-censoring Twitter sound like a good investment?
In conclusion, Weibo might appear to have lucrative growth prospects as more Chinese get online, but that will also cause censorship issues and expenses to rise as well. Meanwhile, mobile messaging apps like WeChat could throttle Weibo's growth shortly after it goes public.

For investors interested in the Chinese Internet market, search giant Baidu, which is already up nearly 90% over the past 12 months, or e-commerce giant Alibaba, which is expected to go public later this year, could be much better long-term bets than Weibo.