From the all-about-comfort underpants of the 1920s to today's Knicker Stickers – that heart-shaped pasty you stick directly to your jeans instead of wearing a real panty– women's undergarments have endured many transformations.

These transformations were mainly triggered by changes in social norms, technology breakthroughs, or even the profound effect of Hollywood starlets on the lingerie industry, especially during the 1940s and 1950s. Stars like Lana Turner, Jayne Mansfield, and Jane Russell left their mark on the undergarments business by popularizing bullet-shaped bras.

Nowadays, what are the trends that could eventually make waves for big lingerie names like L Brands (NYSE:BBWI) and Hanesbrands (NYSE:HBI) or even fuel another transformation within the industry? 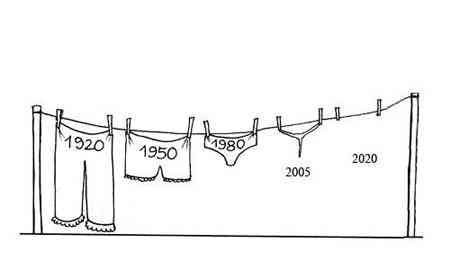 There are plenty of reasons some women choose to go without panties.

First, there's this bright-and-breezy, liberating feeling about going commando that's hard to resist. Then, there's the whole "how to deal with panty lines" nightmare and the relevant wardrobe malfunctions.

More importantly, taking it a step further and ditching your bra as well could be good for your health. After examining for 15 years the effect of bras on breasts, Jean-Denis Rouillon– a sports medicine specialist at the Centre Hospitalier Universitaire in France – found out last year that bras are detrimental to women's health. "Medically, physiologically, anatomically – breasts gain no benefit from being denied gravity," he said during a radio interview with France Info.

Yet, despite the undeniable perks that come with skipping your undies, this scandalous habit was always considered the hallmark of provocative wannabe celebs. It hasn't yet evolved into an actual trend, one that grabs the attention of lingerie industry players. But things could be changing.

In a recent, fashion-based poll conducted by Vanity Fair and 60 Minutes, 25% of the Americans surveyed confirmed that they leave the house without undies, at least, occasionally. Apparently, more people go commando than we might think.

Moreover, lately, some of the most fashion-conscious ladies in Hollywood, including Gwyneth Paltrow and Amy Adams, are elegantly embracing the "wear nothing underneath" thing, selling it as a sophisticated fashion choice. Most recently, Jennifer Lawrence turned heads when she showed up at the Vanity Fair Oscar after-party going panty-less in a sparkly, sheer Tom Ford dress.

Glamour aside, there always was an environmental meaning behind going commando. It's one of the easiest, cheapest, and fastest ways to lighten your wardrobe's environmental footprint.

Influenced by the unfolding "eco-fashion" movement, which gained traction over the past couple of years with the endorsement of well-regarded designers like Stella McCartney and eco-minded celebrities like Gisele Bündchen, "going commando" could eventually become as cool as "going green." Lingerie players could feel the pinch.

Wearable technologies are largely irrelevant to women. So far, developments in this space have been focused more on the tech and less on the wearable part.

This could present lingerie players with an immense opportunity to make undergarments so compelling, both in design and functionality, that taking them off would be out of the question. Already, magic bras that unhook only if the women wearing them are truly in love or, as unveiled earlier this month at SXSW, undergarments that let couples stimulate each other from afar are making waves by giving underwear a whole new meaning.

Although this kind of undergarments might seem tacky, slowly but surely, intimates are starting to serve a totally different purpose than the one they were supposed to serve in the first place.

Underwear as outerwear
Women's intimates – including bras, panties, Spanx, and camisoles – are among the few apparel categories that had a healthy growth rate of 3% last year, compared with a 1% growth rate for the apparel industry overall, chief analyst at NPD Group Marshal Cohen told USA Today.

However, much of the growth came from the fashion craze of wearing underwear as outerwear. Fashion's latest obsession with all things 1990s, from mom jeans to the ubiquitous platform trainers, laid the groundwork for the dynamic comeback of the underwear-as-outwear trend.

While this trend came upon the scene in the 1980s thanks to Jean Paul Gautlier and Madonna, it continued during the 1990s with more conservative designers like Calvin Klein entering the "trot your lingerie out" game.

Today, wearing things like camisoles and bras as street wear is having a huge moment with the support of fashion icons, it-girls, and fashion bloggers.

Where does this leave lingerie brands? Breaking the boundaries between ready-to-wear and intimates equals to bringing the focus back to the woman's body. In other words, lingerie players need to set their sights on promoting pieces that are worth showing off, both in terms of design and comfort.

L Brands' beloved Victoria's Secret label is ahead of the game since it has already made a name for itself in lace undergarments that accentuate women's femininity.

On the other hand, Hanesbrands could be left sort of up the creek.

Even though it is making headway on the comfort front with the launch of innovative offerings (such as the Smart-Size bra that replaces traditional cup-and-band sizes for custom fit), it still has to step its game up on the design front.

Going commando might be liberating and more popular than we might think, yet, undergarments will always fall into the "wardrobe staples" category.

Key industry players should not let this "wear nothing underneath" whim  turn into a fashion must-do. They shouldn't ignore other transformative trends that rewrite the lingerie style rules, either.

The underwear industry has growth spurts every time new trends come along. Boy shorts, for instance, and shapewear helped fuel double-digit growth rates for many key players a couple of years ago. It's time to start adjusting themselves to the unfolding revolutions in this space.