The market breathed a sigh of relief today as the situation in Crimea remained calm even after Russia said it would formally annex the region whose residents voted overwhelmingly Sunday to secede from Ukraine. The Dow Jones Industrial Average (DJINDICES:^DJI) quickly nudged higher after the opening bell and maintained moderate gains.

Microsoft (NASDAQ:MSFT) held a comfortable lead over the other 29 other Dow components for the day. The world's largest software-maker is getting a boost from reports that it will roll out a version of its Office productivity suite for Apple's (NASDAQ:AAPL) iPad later this month. Microsoft's expansion onto Apple's mobile devices continues to close the circle that began way back in 1977 when Microsoft launched one of its earliest commercial software programs, Applesoft BASIC, a program compiler that allowed Apple II users to create more robust programs than they might have with the system's default software.

You probably didn't know that Microsoft's early successes were built on Apple computers before the IBM (NYSE:IBM) PC hit the market in 1981. You might be surprised at how little of Microsoft's history you're familiar with. For example, did you know...

Microsoft was founded in 1975 in Albuquerque, N.M. -- famed for being the place where Bugs Bunny should have made a left turn and for being the backdrop of Breaking Bad -- and didn't move to Washington state until 1979.

Co-founders Bill Gates and Paul Allen set up shop in Albuquerque (as Micro-Soft, which became Microsoft in 1981) to develop and sell a BASIC interpreter for the MITS Altair 8800, which is widely considered the first true microcomputer and the spark that launched the microcomputer (and later the PC) revolution. Both Microsoft and Apple were formed as a result of their founders' keen interest in the Altair 8800.

Microsoft generated roughly $19,000 a year in revenue (equal to about $78,000 today) for its first two years in operation while focusing on supporting the Altair 8800. When the first PC "trinity" (the Apple II, the TRS-80, and the Commodore PET) launched in 1977, Microsoft's revenue exploded to $380,000 as the company began offering BASIC for these new machines. In 1978, Microsoft sold more than $1 million worth of software for the first time.

Microsoft actually released an operating system before MS-DOS. Called Xenix, this OS was a Unix variant, licensed from AT&T (NYSE:T) and launched in 1980. Xenix was largely abandoned after the AT&T antitrust breakup in 1984, which pushed post-breakup AT&T to sell Unix itself. By this point, however, Microsoft was firmly established with an operating system that would help it become the largest software company in the world.

The OS deal between IBM and Microsoft that created MS-DOS nearly didn't happen. MS-DOS  is based on an earlier OS called CP/M, which IBM attempted to license from creators Digital Research after Gates directed IBM negotiators there. The negotiators were rebuffed when company head Gary Kildall demanded per-use royalties instead of the flat license fee IBM wanted. IBM, familiar with Microsoft's OS work thanks to a Microsoft hardware plug-in card that let users run CP/M on Apple IIs, returned to Gates with a request for an operating system. Gates discovered a CP/M variant called QDOS (Quick and Dirty Operating System) designed to run on the chips in IBM's upcoming PC, and purportedly paid $75,000  for its rights. IBM wound up using both CP/M and MS-DOS  (which was rebranded as PC-DOS for exclusive use on IBM machines), but by pricing Microsoft's product at $40 against $240 for CP/M, IBM ensured that budget-conscious consumers would adopt MS-DOS as the standard.

Microsoft's deal with IBM wasn't particularly profitable at first. The two companies agreed to the one-time license fee IBM had originally wanted to pay for CP/M, and Gates himself later estimated that PC-DOS (the IBM-exclusive variant) only brought in about $186,000 in revenue. However, since Microsoft retained the rights to its own DOS variant, MS-DOS, it was free to charge per-use license fees to other manufacturers and to individual consumers, which it began to do in 1983 after originally offering MS-DOS for a flat one-time license fee of just $95,000 to PC-clone manufacturers. MS-DOS was still the most popular computer OS a decade later -- although many installations were bundled with early versions of Windows -- and Microsoft earned $399 million in sales from MS-DOS in 1992 alone. MS-DOS was finally discontinued in 2000 after nearly two decades of support.

Don't feel too bad for QDOS creator Tim Paterson for selling out at such a low price. He also came to work for Microsoft as part of that purchase, and was awarded a number of pre-IPO stock options. Feel bad for Paterson because he didn't recognize the value of those options -- he drifted in and out of the company before returning for good in 1990, but his early options (worth about $30 million in 1997) were never exercised.

Cofounder Paul Allen left the company in 1983 after successfully battling Hodgkin's lymphoma. The end of Allen and Gates' professional relationship was contentious -- Gates had begun plotting to dilute Allen's stake  as a result of his "lack of production," which understandably angered a recently recovered Allen. Gates offered to buy out Allen's stake at $5 a share. Those shares were worth more than $11,000  apiece three decades after Allen resigned, but Allen had originally wanted just $10 each! It's a good thing for him that Gates was so conservative in 1983. However, if Gates had bought Allen out, it's possible that his net worth might have topped out at nearly $200 billion (assuming that his combined ownership of 88% of the company  from that hypothetical 1983 buyout would have been diluted at the same rate as his actual 1983 stake of 53%).

Microsoft released Windows 1.0, its first graphical OS, in 1985. However, Windows didn't become the company's most popular operating system until after the launch of Windows 3.0 in 1990, which was greatly aided by Microsoft's ability to get most PC manufacturers to pre-install before consumers got their hands on the newest machines.

Windows became the target of a major copyright-infringement lawsuit in the 1990s, as Apple sued for billions of dollars in damages over the belief that Microsoft had copied the "look and feel" of the Macintosh OS. Apple lost the case, and this crushing legal defeat might have influenced Apple to focus more intently on patent rights and legal defenses -- its more recent "look and feel" lawsuits have seen more success in American courts.

Microsoft's 1986 IPO set an initial market cap of about $780 million on the software maker. The company topped out at a market cap 790 times larger at the end of the dot-com boom. In 1999 alone, some 8,000 Microsoft employees  cashed in $8 billion worth of options. All told, at least 10,000  Microsoft employees became millionaires from their stock holdings.

Microsoft became the world's most valuable publicly traded company in 1998, and it still holds the title of "World's Most Valuable Public Company" when adjusting for inflation. Its peak market cap of $616 billion, reached at the end of 1999, would be equal to about $860 billion today.

Ever since Microsoft joined the Dow when it was close to its all-time peak market cap, it has underperformed the index -- but dividend payments have been the difference between a decline and a net gain over that time frame: 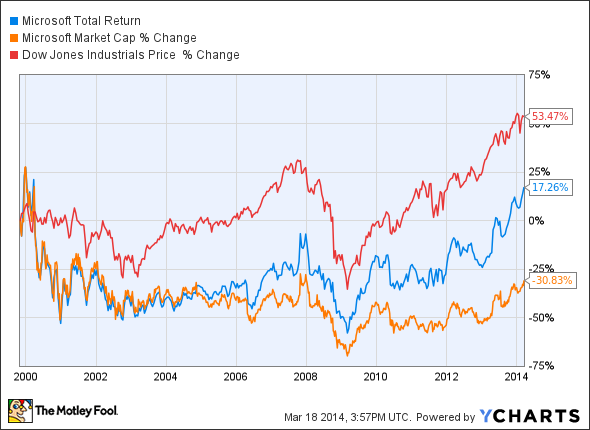