Most Wall Street analysts will readily admit that Amazon.com ( AMZN -1.81% ) is one of the hardest stocks to value. The company has consistently posted rapid sales growth; revenue jumped from just $5.3 billion in 2003 to nearly $75 billion last year. Yet earnings growth has been extremely volatile. Indeed, Amazon's 2013 EPS was more than 75% below the all-time high from a few years ago. 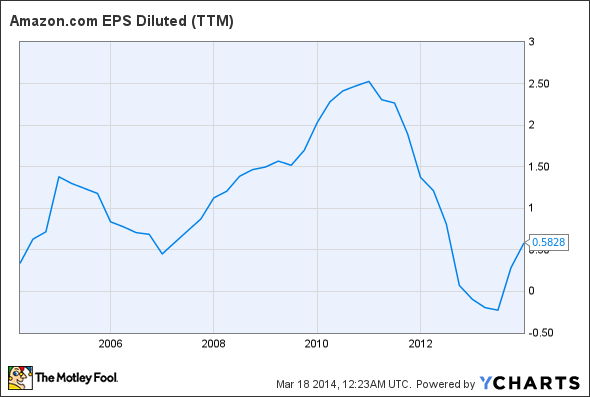 The disconnect between strong revenue growth and weak earnings is driven by Amazon's heavy growth investments. This earnings volatility forces analysts and investors to undertake a lot of guesswork to determine the company's "true" value.

Most of these analyses skew bullish; a recent valuation analysis by Bernstein Research is a case in point. However, investors' optimism stems from overly rosy thinking. Other very plausible scenarios that could lead to much lower valuations for Amazon are simply ignored.

(Over)valuing Amazon
Last week, Carlos Kirjner of Bernstein Research, a big Amazon bull, acknowledged some of the difficulties in valuing Amazon. He noted that the company's revenue mix has been rapidly shifting due to the growth of the third-party marketplace business and the Amazon Web Services cloud computing business.

Kirjner ran a series of valuation analyses in order to attack the problem of valuing Amazon from multiple perspectives. These analyses placed Amazon's fair value as high as $571 a share, more than 50% above the market price. Even the most "conservative" of his scenarios puts fair value at $451 per share.

A Bernstein Research report put Amazon's fair value as much as 50% ahead of the current price.

There are two main reasons that Kirjner's analysis comes out so rosy. In some scenarios, he uses "historical multiples" for Amazon. This unwisely projects past growth rates into the future. In other scenarios, Kirjner applies sales multiples from other businesses with much higher-margin structures. This unwisely assumes that Amazon can ultimately replicate these other companies' profit margins.

Not your father's Amazon
The danger of using historical multiples stems from the torrid growth Amazon has experienced up to this point, combined with the law of large numbers, which will restrict growth going forward. 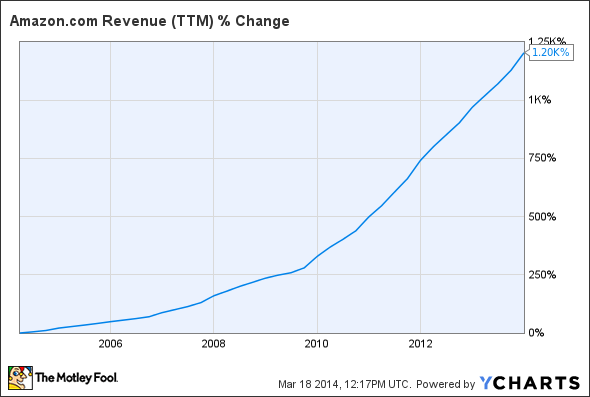 The chart above shows that Amazon's revenue has risen by about 1,200% in the last 10 years. (EBITDA, a measure of profitability, has also risen by a similar amount in the last 10 years.) If Amazon repeated this performance in the next 10 years, revenue would hit roughly $1 trillion by 2023. Even the most enthusiastic Amazon bulls recognize that revenue will not grow nearly this quickly.

Looking for better comparisons
Kirjner ultimately tried to estimate Amazon's value by comparing each of its three main business lines (first-party retail, third-party retail/fulfillment, and Amazon Web Services) to their competitors. He then applied price-to-sales ratios from these competitors to his sales estimates for each Amazon business line.

This analysis assumes that the businesses being compared have similar margin profiles and future growth prospects. However, while Amazon has better growth prospects than many of the companies Kirjner uses for comparison purposes, it also has a much lower-margin profile. These two factors could theoretically cancel each other out, but on balance the price-to-sales comparisons seem to inflate Amazon's value.

For example, in the first-party retail business, Kirjner compares Amazon to the S&P 1500 retail index. This index includes fashion retailers that can reliably earn double-digit pre-tax margins. By contrast, Amazon's main selling point is that it offers the best prices on widely available products.

Costco is perhaps the best comparison for Amazon's business today.

In this sense, the best comparison for Amazon might be Costco ( COST -1.77% ), which also attempts to drive high sales volume through very low prices. Costco's sales are growing at a healthy high-single-digit rate (still not nearly as quickly as Amazon's retail sales). However, Costco's operating margin has hovered around 3% recently, justifying a low multiple of 0.5 times sales.

Amazon's operating margin has been lower than that of Costco for several years now. However, Amazon has previously achieved an operating margin above 6%. Amazon bulls think that in the long run, Amazon will return to or even exceed its historical margins. 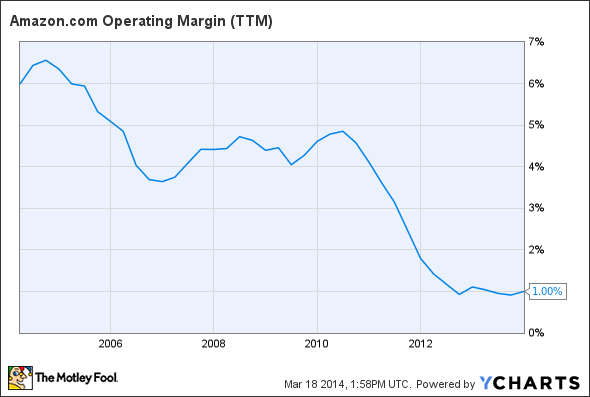 The idea that Amazon will return to its 2004 or 2005 margin level is wishful thinking, though. Amazon's business has completely changed since then. In 2005, media still accounted for more than two-thirds of Amazon's revenue. Today, media represents less than one-third of Amazon's revenue, and it is growing more slowly than Amazon's other product lines.

The rise of the "electronics and general merchandise" category -- where Amazon competes on price with other mass retailers -- has led to a permanent change in its retail margin structure. To be sure, Amazon's operating margin is artificially compressed at 1%. However, there is no fundamental reason to expect retail margins to return to levels that were achievable when its main competitor was Barnes & Noble.

Foolish wrap-up
Similar comparison problems may exist for Amazon's other business lines. The broader point is that it's dangerous to value businesses by analogy when there isn't a good analogy to use. (As I acknowledged earlier, my Costco analogy is imperfect because Costco is not growing as quickly as Amazon.)

A better way of valuing Amazon would be to estimate its earnings or cash flow a few years from now (when the company's current investments should be paying dividends) and then discount back to present value.

That's not a straightforward exercise, either. However, it would force Amazon bulls (and bears) to directly spell out their long-term growth and margin assumptions. This would make it a lot easier for investors to evaluate the credibility of various valuation scenarios.