Most developmental stage biotechs eventually face a 'make or break' moment during the course of their life-cycle. Generally speaking, these key events oft-center around clinical trial data that either validate or sink the company's experimental pipeline. In statistical terms, the chances of success for any clinical trial are notably low, and failure can result in sharp downturns in share price. Even so, companies that are able to successfully navigate these turbulent waters do tend to occupy the pole position in the list of annual top performers in the sector -- giving risk-tolerant investors good reason to dig deeper.

Inovio Pharmaceuticals(NASDAQ:INO) is rapidly approach such a 'key event', as CEO Dr. Joseph Kim put it on the company's earnings call yesterday. This key event is Inovio's mid-stage data readout for VGX-3100 set for mid-2014. VGX-3100 is the company's lead clinical candidate, and is indicated as a potential vaccine for HPV-caused pre-cancers and cancers. This data readout will be a watershed moment in Inovio's existence because it will either open up the eye-popping value in the company's large DNA vaccine portfolio as a whole, or force the company to rethink its entire platform.

With that in mind, let's take a closer look at Inovio's fourth quarter earnings report and clinical update filed yesterday.

Key takeaways
On the financial front, Inovio's management believes they now have a cash runway that extends through 2017. Breaking this statement down a bit, Inovio raised $59.2 million in net proceeds from an underwritten offer on March 7th, and reported an average monthly cash burn rate of $2.75 million throughout 2013. As Inovio exited 2013 with $52.6 million, I estimate the company to have around $106 million at the current time, all else being equal. When adding the revenue expected via the partnership with Roche (OTC:RHHBY), one can see how management arrives at this estimate.

Turning to clinical matters, Dr. Kim said the company is in the preliminary stages of planning a pivotal late-stage trial for VGX-3100, assuming a positive data readout later this year. The final design of the trial will depend on feedback from the U.S. Food and Drug Administration at the conclusion of the current trial, and of course, the results of the ongoing trial. That said, Dr. Kim did provide some insight into Inovio's plan in terms of covering the cost of a large, late-stage trial. Specifically, he stated that the company is open to partnering, although Inovio does have the resources to cover the expense on its own. What's not clear is if the company has factored in the cost of a late-stage trial for VGX-3100 into its cash runway estimate, or if this estimate would have to be revised if Inovio pushes ahead sans partner.

Looking beyond the pending data readout, Inovio plans on launching VGX-3100 into two additional mid-stage trials this year for head/neck cancer and cervical cancer, where the vaccine will be tested in combination with an immune activator IL-12. Inovio is also advancing its preclinical work on its vaccine indicated for hepatitis B being co-developed with Roche, and planning an early stage trial for its HIV vaccine candidate.

Foolish wrap up
Shares of Inovio have been particularly volatile heading into this watershed moment. Even so, they have still risen, albeit unevenly, over 500% in only a few short months. 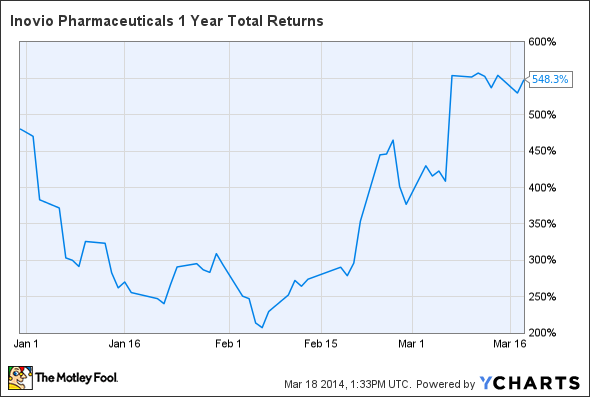 So, I think it's safe to say that investors are optimistic about Inovio's chances going forward. And if you look at the astounding commercial success of some of the new generation of vaccines, such as Pfizer's (NYSE:PFE) Prevar and Sanofi's PENTAct-HIB, it's easy to understand the enthusiasm for a company like Inovio with a market cap still under $1 billion.

That said, Inovio's scientific approach is based on a technology that has yet to see a commercial breakthrough. Because I am a risk-adverse investor, my view is that Inovio is definitely worth keeping tabs on, but it's probably best to wait until after VGX-3100's pivotal data release before investing. If VGX-3100 reports positive top-line data, there is good reason to believe pharma giants like Pfizer, that have gobbled up smaller vaccine companies in the past, will take a keen interest in Inovio. Moreover, the company has a robust experimental pipeline with multiple potential blockbusters. Put another way, I believe there will be significant upside remaining post-data readout and considerably less risk.