Just a few years ago paying for Microsoft (NASDAQ:MSFT) Office was a required part of buying a computer.  Almost everyone who owned a PC (or a Mac) needed a word processor (Microsoft Word) and anyone using their computer for work likely needed Excel for spreadsheets, PowerPoint for presentations, and Outlook for email.

Yes, there have long been alternatives to Office but they tended to be used either by the cheap ("I write all my reports in Notepad") and the type of folks who know how to install Linux on an old PC ("I've been using OpenOffice since it was in beta"). The rise of the tablet however has helped an entire generation break the Office habit and Microsoft is finally poised to attempt to win them back.

What is Microsoft doing to win back Office market share?

Microsoft barely has a toehold in the tablet market and while its own Surface and some other Windows 8 tablets come pre-installed with Office, those running Google's (NASDAQ:GOOGL) and Apple's (NASDAQ:AAPL) iOS do not. That has allowed millions of tablet users to learn that there are alternatives. The chart below shows just how few tablet users are on Windows-based devices. 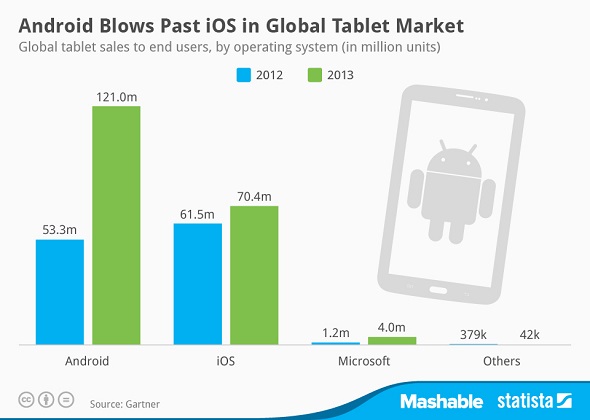 To win these users back, Microsoft is going to start offering its online version of Office in an individual version dubbed Office 365 Personal for $69.99 a year. Office 365 offers all the Office programs and works on any device with an Internet connection.

"Coming this Spring, Office 365 Personal is a new, great option for people interested in using Office 365. It's designed for an individual, allows for one PC or Mac and one tablet to be connected to the service," the company wrote on its Office blog.

Microsoft also has a full-fledged version of Office ready for iPad and iPhones, Reuters reported, but has not announced a release date.

"We have some pretty exciting plans," John Case, the top Office marketing executive, told Reuters without giving any details. "Certainly, interest in Office on the iPad is extreme. When they [customers] want to do real work, they are going to want to use Office."

What happened to Microsoft's Office monopoly?

Digs from Microsoft executives aside, people have found ways to "do real work" without using Office.

Back before tablets Windows ruled the operating system world and Microsoft had almost the entire market wrapped up. Since Windows came with your computer (and only the techiest of techies knew there were alternatives) it was easy for Microsoft's partners (the companies that actually made the PCs) to either pre-install Office and include it in the price of of the computer or have a trial addition loaded onto the desktop. Even the people who chose to use an Apple computer pretty much had to pay to install Office on it because it was the standard for doing business.

That changed with the advent of the tablet -- a market Microsoft seemed to mostly ignore. In 2014 and 2015 Gartner reports that tablet sales will continue to grow while traditional PCs continue to fall.

"Users continue to move away from the traditional PC (notebooks and desk-based) as it becomes more of a shared content creation tool, while the greater flexibility of tablets, hybrids and lighter notebooks address users' increasingly different demands," said Gartner Research Director Ranjit Atwal.

How much money is Microsoft losing?

Office still has a lot of users and makes plenty of money for Microsoft. The product is part of the Microsoft Business Division, which includes Office, Exchange, SharePoint, Lync, Yammer, Microsoft Dynamics business solutions, and Office 365. That division brought in $24,738 million in 2013, $24,082 million in 2014, and $22,407 million in 2012, according to the company's 2013 annual report.

Obviously those are hefty numbers. But by not serving the tablet market, Microsoft left a lot of money on the table.

According to one analyst, Reuters reported, Microsoft is giving up $2.5 billion a year in revenue by keeping Office off the iPad.

"Office is being disenfranchised on the hottest growth platforms," Nomura analyst Rick Sherlund wrote in a note to clients. "Maybe it is time to focus on Office independent of Windows."

Can Microsoft Office win users back?
Microsoft has lost some Office users and they are never coming back. The youngest generation of tablet users may not even know what they are missing -- they didn't begrudgingly find Office replacements once they got tablets, they had never used Office in the first place. It's hard to imagine that those users would pay for access to programs that do things they have found other free ways to do.

All is not lost for Microsoft as Office is still the standard program for business. While Google's free online apps can mimic Office and OpenOffice is a reasonable free software-based option, neither of those packages is a direct clone. There are countless people using Office at work or school that -- for a reasonable fee -- would be willing to install it on their tablets.

Still while $69.99 a year may not be high for a high-powered businessman, it seems a little rich for tablet users accustomed to paying a dollar or two for an app. To reach those users -- the bulk of the non-Office generation -- Microsoft will have to either lower the price or offer a free ad-supported version Office.