March Madness is here, and beyond the contests, pools, and predictions, an important question exists: What about the schools themselves? Does a bid to attend the NCAA Men's Basketball Tournament pay off, financially speaking?

The cost of getting there
This is a question that has been asked before, recently by The New Yorker. It estimated that in 2013, the NCAA Tournament field spent an average of $5 million per team on men's basketball. At 68 teams, that's a total of nearly $350 million, and as the outlet points out, spending has correlated loosely with tourney success over the past decade.

"The team that spent the most won twice -- Syracuse (2003) and Duke (2010)," Nick Traverse wrote, adding, "In other years, the winner wasn't far behind: the eventual victor has always had a budget in the top 18." According to Traverse, who mined Department of Education data, championship teams typically spent 44% more than average -- a little over $7 million.

A first round NCAA Tournament game between UNC and Radford. Image via BP6316, Flickr.

How the revenue is split
Currently in the midst of a 14-year media contract with CBS (NASDAQ:VIAC) and Time Warner's (NYSE:TWX) Turner Sports, the NCAA divvies up this revenue based on a system known as the Basketball Fund. According to its most recent distribution plan, a little under $190 million will be split between conferences this year. The system isn't overly complex -- the further an individual team advances in the NCAA Tournament, the bigger the reward for its conference.

Participation in each tournament round excluding the championship is worth what's known as a "unit share." For every unit share a team earns, its conference is awarded close to $250,000 a year over the next six years -- $1.5 million total. A team that loses in the first round, for example, has earned one unit share for its conference, worth $1.5 million over the next six years. A team that loses in the second round has earned twice this amount, and so on.

First given to conferences, the money is then distributed to individual teams. As Forbes points out, "some conferences equally split the revenue among all conference schools, while some provide a disproportionate share to the teams that were actually responsible for the "unit creation."

Regardless of how the dollars are split, though, one thing is clear: It pays to be in a major conference. 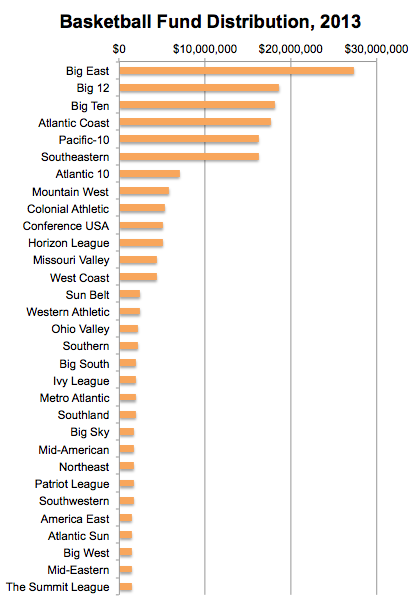 Last year, the six largest conferences by unit shares -- the Big East, Big 12, Big Ten, ACC, Pac-10, and SEC -- took home an average of seven times as much fund money as their peers.

The bottom line
If you're wondering whether it's worth it to increase expenditures in search of tournament success, that depends. Most college programs generate some ticket, concession, and merchandise sales, and a surprising level of March Madness exposure could boost these revenue sources in the years that follow.

After making the Final Four in 2006, for example, George Mason generated more than $650 million in free publicity, according to a university professor, and monthly bookstore sales increased by 1,300%.

Cinderella stories like that don't happen every year, though. And with all else constant, a team could only justify a $1 million budget hike with an Elite Eight appearance (or beyond) if it were given 100% of its share of Basketball Fund money. Given that many conferences split funding equally among teams, though, this scenario's not the likeliest.

More reasonably, a slight budget increase of a few hundred thousand dollars could be offset by a deep tournament run, and assuming you're in a top conference, there's more leeway. Why? There's more distribution money available. Duke, for instance, is better off than someone like Wichita State because it plays in the ACC, which typically sends far more teams to the tournament than Wichita's Missouri Valley.

At the end of the day, the direct value of a March Madness bid is worth about six installments of $250,000. This amount increases by $1.5 million for every additional round a team advances. So the next time you see players cheering for their teams in the NCAA Tournament, remember that it will, quite literally, pay for them to win.