The Fed is slowing its bond-buying program again, which caused stocks to sink quickly today.

The Dow Jones Industrial Average ( ^DJI 0.10% ) plunged 128 points in late trading after the Federal Reserve announced a further reduction in its monthly bond-buying program, now down to $55 billion. 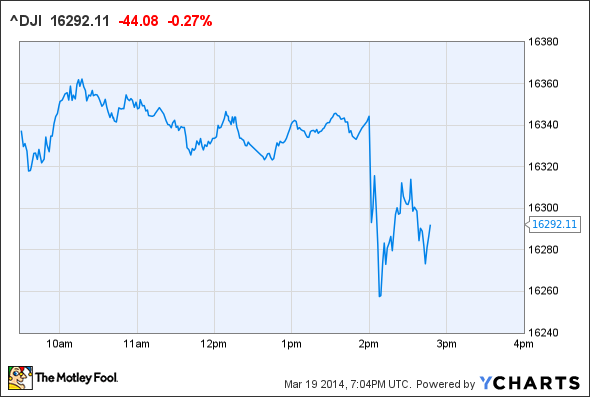 The other significant news out of the Federal Open Market Committee's latest meeting was a further pullback on how unemployment will be considered when it comes to interest rates. Previously, the Fed had pointed to 6.5% unemployment as the point at which interest rates could start to rise, but it said today that it would look to a broader set of economic markers when deciding the issue.

Ten of 16 Fed officials think the short-term benchmark interest rate will rise to 1% or more by the end of 2015, which was slightly higher than seen in December.

No signs of a strong recovery yet
Maybe more important for investors long term is that the Fed doesn't see economic activity being anywhere near where it wants right now. Bad weather this winter hurt retail sales and consumer confidence, leading to just 2.4% GDP growth in the fourth quarter of 2013, down from 4.1% in the third quarter.

The economy is strengthening as unemployment slowly falls, the federal budget deficit declines, and companies post stronger earnings, but the Fed's concern is not to pull off the gas too quickly and send the economy back into recession. So, for now, it will slow bond-buying, which will likely lead to slightly higher long-term interest rates, but keep short-term rates near zero.

The other revelation today is that interest will likely stay below normal even after the United States drops below 6.5% unemployment, as long as inflation doesn't get out of control. A sharp rise shouldn't be expected anytime soon.

What this all means
As usual, the Fed's statements can be taken very differently based on where you stand. If you're borrowing money and reliant on leverage to grow earnings, you should be happy with the Fed today.

On the other hand, rates are low and will stay that way for now because the economy isn't growing quickly enough to allow for an increase. That's bad news even for companies that borrow money, so even if you see some bright signs in the Fed's statements today, it's not exactly bullish for Foolish long-term investors.