It's Sunshine Week 2014! For those unfamiliar with the term, Sunshine Week aims to improve the conversation about access to information, encouraging more disclosure from the U.S. government. Money in politics is one of the primary issues, and given that this is a website on investing, our focus this week is on publicly traded companies and the money they spend lobbying Washington. All of the data in this article comes from opensecrets.org and the Senate's Lobbying Disclosure Act database.

Today we are looking at Northrop Grumman (NYSE:NOC). The defense contractor spent more money lobbying in 2013 than any other publicly traded entity. Of the total $3.21 billion spent on lobbying last year, $20.59 million came from Northrop.

First and foremost, $20.59 million is a huge amount of money to spend winning friends and influencing people, but how does it compare to the company's track record over time? If it's an aberration, maybe we can dismiss the 2013 data as a one-time occurrence.

Northrop actually spent $20.9 million lobbying in 2008, so last year's number certainly isn't an anomaly. In fact, the company's average lobbying spending has trended up for the company over the last decade.

Let's put Northrop's spending in context of the rest of the industry. After all, if Northrop's peers are spending just as much, we can dismiss its behavior as the norm for the entire defense industry. If we were to pool all lobbying dollars for Northrop, Boeing (NYSE:BA), Lockheed Martin (NYSE:LMT), General Dynamics, and Raytheon, here's how it would look: 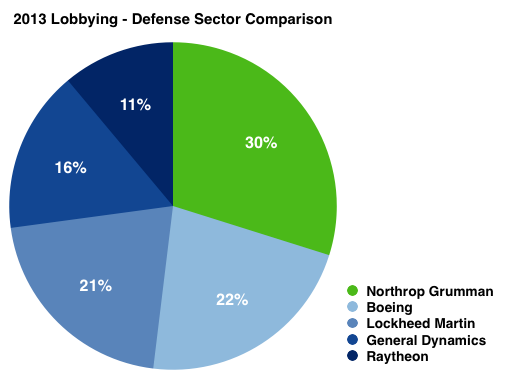 Northrop's share of lobbying dollars is clearly much larger than its competitors, but at $15.2 million and $14.4 million, respectively, Boeing and Lockheed Martin are not too far behind. That said, if you factor in market cap, implying larger companies will spend more on a nominal basis than smaller peers, Northrop is punching way above its weight class here.

Now let's look at exactly what Northrop is focused on in Washington. Here's a look at the company's efforts broken out by the number of lobbying reports addressing specific issue codes: 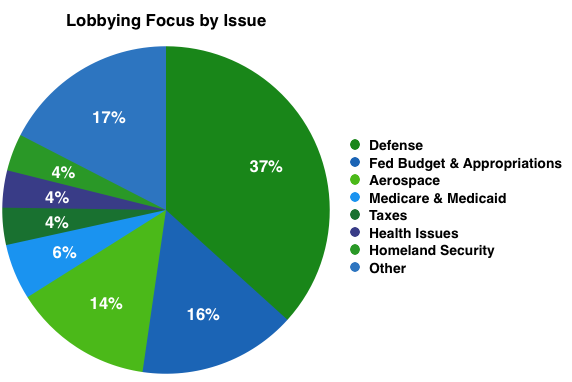 By and large, all of these categories make sense based on Northrop's business. "Medicare & Medicaid" and "Health Issues" stand out as different, but the company was lobbying on those issues from an information technology angle, specifically on "Health Information Technology Adoption" and "Health IT Fraud Prevention." A seasoned Northrop investor might not bat an eye at this data, but if you are new to this company, you can use it to quickly discover what issues really matter to the health of the business.

Why all of this matters
Now that we've flushed out Northrop Grumman's lobbying profile, it's fair to ask what it all means. Does lobbying really matter to investors?

There is a growing body of work that illustrates that publicly traded companies that spend money lobbying post better market returns than companies that do not. A 2013 academic paper from the University of Mississippi concluded that there is a direct link between lobbying activity and shareholder wealth: "Our results suggest that stocks of lobbying firms significantly outperform non-lobbying firms."

An investment research firm called Strategas has taken it one step further, creating an index that tracks the 50 companies that spend the most money on lobbying every year. The firm claims its index has beaten the S&P 500 for the last 15 straight years, implying the market is not properly valuing lobbying expenditures.

Lobbying is not necessarily an opportunity in the minds of most investors. In the spirit of Sunshine Week, it's time to celebrate disclosure and shine a little light on the lobbying activities of your stock holdings.