In the midst of a $400 million debt reduction plan, Quiznos filed for bankruptcy last week. While only a handful of its 2,000-plus locations are affected, the news illustrates just how far the toasted sandwich chain has fallen. The number of active franchises has been cut in half over the past seven years, 25% of all Quiznos restaurants now fail, and perhaps worst of all, the company is losing the market share battle to Subway and Jimmy John's by a significant margin. How can it get back on track?

1. Organize the menu by price.
I propose a simpler, friendlier menu. Quiznos' biggest problem is customer experience, and more specifically, the ordering process. There's no learning curve. The majority of franchises' menus -- including the locations I've visited -- are organized by meat, rather than by price. Notice the difference? 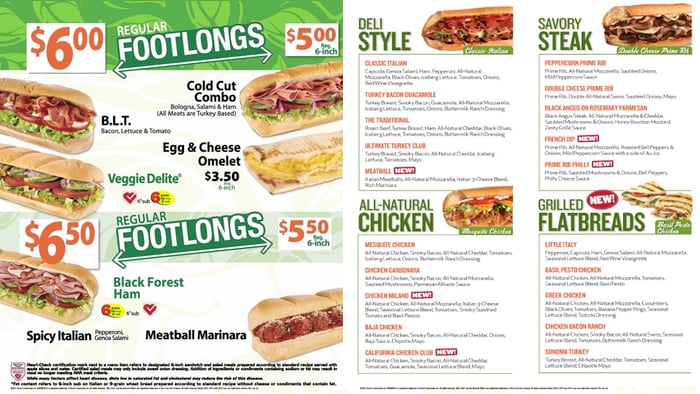 On the left is a typical Subway menu organized by price. On the right is the Quiznos standard, which is categorized by meat. Jimmy John's (not pictured) uses a similar strategy as Subway, dividing its menu by vertical columns of varying prices.

This difference may seem insignificant, but it's not. A growing body of research, including a 2011 study from Georgia State University and Columbia, note that "simple changes in menu structure and content can have a significant impact on [consumers'] choices." A menu organized by price makes it easier for cost-conscious customers. Quiznos' style, on the other hand, requires customers to be familiar with its menu.

As a 2013 IBISWorld report reveals, consumer preferences in the sandwich space are strongly influenced by prices. It's estimated that over 50% of this market is comprised of lower-income households (below $50,000 in annual income), and just 12% of all customers come from households that make above $100,000 a year. Most sandwich-buyers are focused on value, and by failing to organize its menu like its competitors, Quiznos is ignoring the majority of its customer base.

2. Stimulate customer creativity.
No official stat exists, but I can say with relative certainty that a portion of sandwich-eating consumers prefer customization. Step in a Subway, and it's easy to order a tailor-made footlong. Walk into a Jimmy John's, and it practically begs you to mix and match ingredients.

Not so with Quiznos. Although it's possible to create your own sandwich at its franchises -- I do on a regular basis -- first-timers are not made aware of this fact. As some customer complaints show, the chain, whether it's because of a lack of signage or employee training, doesn't stimulate customer creativity properly.

At the very least, an educational sign -- perhaps with a phrase like, We toast things here at Quiznos...Just tell us if you want your sub untoasted -- would shallow out the learning curve for first-time customers. With only 3.7% of the sandwich market (Subway and Jimmy John's hold nearly 70% combined), Quiznos must embrace menu simplicity and choice, not ignore it.

How much would these changes cost?
After it emerges from bankruptcy, Quiznos will likely be looking for a change. As my colleague Daniel Kline recently wrote, "It has to be something different, even if the products look similar." And that's the beauty of the aforementioned three-step plan -- it's not overly expensive.

How much would it cost to provide updated menus and signage to every franchisee? Including design time, the expense would likely be in the low seven figures, possibly less. Of course, a companion marketing campaign -- to highlight a "new focus on customization" -- is an option, but not a must.

The bottom line
Because Quiznos is private, it's difficult to get a crystal clear picture of its finances. But considering its 2,100 locations generate average sales of about $350,000 per year, according to Pacific Management Consulting, the company likely oversees at least $700 million in annual revenue. Given that, it's reasonable it could consider spending a few million dollars to fix its customer experience.