Although some analysts contend drinkers are suffering from craft beer fatigue, the just-released numbers from the Brewers Association seems to belie the sentiment that they're tapped out, as craft beer volumes rose 18% in 2013, hitting 15.6 million barrels, while their retail dollar value rose 20% year over year to more than $14 billion. The niche now represents 7.8% of the total U.S. beer market, its highest level ever. 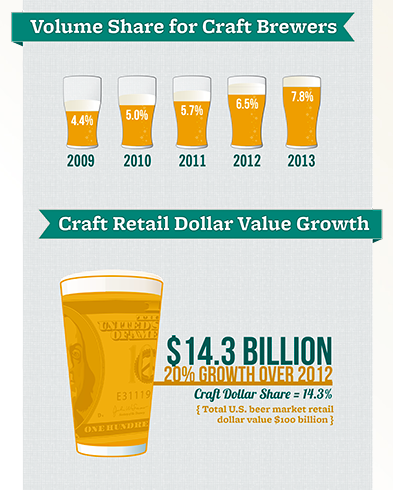 With 41 new breweries opening in 2013 and just 44 closing, there are now 2,822 breweries operating in the U.S., 98% of which -- some 2,768 in total -- are considered craft breweries. Maybe the restaurant and bar scene in North America is flagging, as the analysts at Restaurant Sciences recently contended, but the proliferation of breweries and the rising tide of sales suggests maybe we're just choosing to enjoy the beers at home.

The industry expansion is underscored by the phenomenal recovery enjoyed by craft beer leader Boston Beer (NYSE:SAM), whose full year financial results issued last month showed depletions were up 23% from 2012 as core shipment jumped 25% largely on the strength of its flagship Samuel Adams brand, though also because of its hard ciders and teas. After suffering from two years of declining depletions, or sales made by distributors to retailers, which are considered a reliable proxy for consumer demand, Boston Beer's top label recovered strongly in 2013 and has been leading the brewer master higher.

The Brewers Association is looking for the craft beer industry to achieve a 20% share of the market by 2020, and though this is a lofty goal, it may not be as lofty as it seems, because once again it will rewrite the definition of what constitutes a craft brewer.

One of the tenets of the "craft" designation has been the focus on traditional brewing ingredients like malted barley, and though nontraditional adjuncts used to enhance the flavor of the beer were also acceptable, the tight definition excluded age-old breweries like D.G. Yuengling & Son and Narragansett, whose beers were made from rice, corn, and unmalted barley, rye, and wheat. That's changing now, as the trade group admits that adjuncts -- which are just unmalted grains, or those that haven't been partially germinated to release their enzymes -- are really and always have been a part of traditional brewing. Belgian Lambic, German Weizen, and Irish Stout are examples of brewing traditions dependent on the use of adjuncts. So, beginning in 2015, brewers like Yuengling, Magic Hat, and Butte Creek will see their annual production included in the annual tally.

While the trade group has long railed against the encroachment of mass brewers into the craft brew realm, believing their presence undermines the true craft breweries, it also revised its rules several years ago for Boston Beer, arguably the industry's best-known craft brewer, as it approached the previous 2 million barrel threshold. Accordingly, a craft brewer is now one that has annual production of 6 million barrels of beer or fewer.

And lastly, a craft brewer has an ownership structure that is less than 25% controlled by a mass brewer, which obviously excludes such "crafty" beers as Shock Top and Goose Island by Anheuser-Busch InBev and Molson Coors' Blue Moon. Consumer Reports created a stir when its taste-test review acknowledged the trade group's criteria and then promptly discarded them, believing drinkers themselves aren't so elitist. Its reviewers chose Shock Top as the best craft beer.

The Brewers Association's changes, while seemingly arbitrary, reflect in part the growth the industry overall has witnessed over the past few decades, and the 20% market share goal, though "aspirational," is not beyond the realm of possibility. That seems to bode well for Boston Beer, which has long ridden craft beer's popularity higher and higher. As the industry continues to pour out heady numbers, investors may want to fill their portfolios with the brewer of Samuel Adams beer.