Freeport-McMoRan (NYSE:FCX) emerged as the big spender in the government's latest round of lease auctions in the Gulf of Mexico. The company won 16 of the 17 bids it placed as it put up $321 million to secure drilling rights that come with these leases. That amount was three times more than the $104 million that runner-up Chevron (NYSE:CVX) bid to score its winning bids. Overall the industry bid $1.1 billion for leases, with $872.1 million of those bids being winners.

Freeport-McMoRan wasn't the most aggressive bidder at the auction. That distinction went to Cobalt International Energy (NYSE: CIE), which won 44 of its 46 bids. That said, Cobalt didn't gamble a whole lot of money on its winning bids as the company just offered up $26 million for those winning leases.

Freeport-McMoRan, on the other hand, put out one bid that was nearly three times what Cobalt Energy bid on all of its winning leases. That bet saw Freeport-McMoRan's pledge $69 million to beat out five rivals for a single tract in the Atwater Valley leasing area. One of the reasons why that tract appealed to Freeport-McMoRan is because it's a pretty sure bet as the industry has already made at least five discoveries in the area.

Freeport-McMoRan isn't known for being a high roller in the Gulf of Mexico. However, it didn't have as much competition for leases this time around because a lot of its big oil rivals are cutting back on spending. In fact, some of its larger rivals spent more than a $100 million each the last time the government auctioned off Gulf leases, but those same companies just spent a few million dollars a piece this time around on new leases. With so much competition on the sidelines Freeport-McMoRan was able to be aggressive and bulk up its position in the Gulf.

Why is Freeport-McMoRan interested in the Gulf?
The Gulf of Mexico is an important area for Freeport-McMoRan's future. While the company has proved reserves of 171 million barrels of oil equivalent, it sees its total resource potential of more than 5.8 billion barrels of oil equivalent. That resource potential only increased with the lasted round of winning bids. Because of this potential the company sees dynamic production growth in the years ahead as the following slide shows. 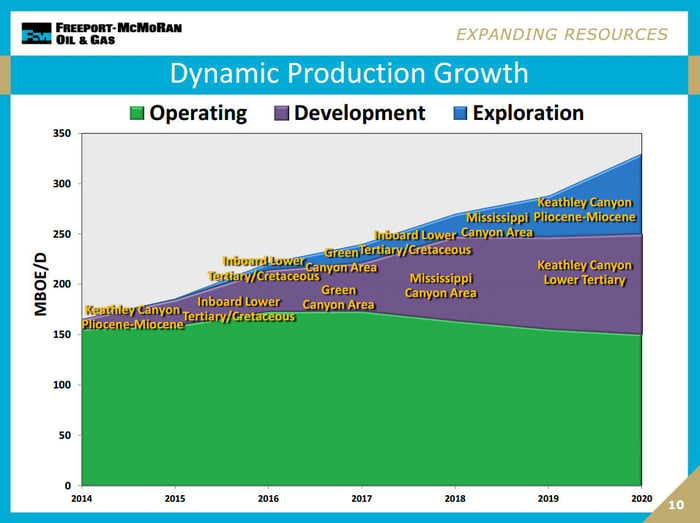 As that side details the potential is there for Freeport-McMoRan to double its production by 2020. The company can achieve that lofty goal because it has a really has a good balance of short-term production growth in the works as well as longer-term opportunities that hold real promise. One of the short-term projects that will start to produce for the company and its partners is the Lucius oil field. The field, which was discovered in 2009 and cost about $2 billion to develop contains about 300 million barrels of oil equivalent and should begin producing in the second half of this year.

In addition to that the company's 100% operated Holstein platform is being refurbished to handle additional oil production. The company is looking to tie in future production at its Holstein Deep development as well as any future discoveries from its Copper exploration project as the following slide shows. 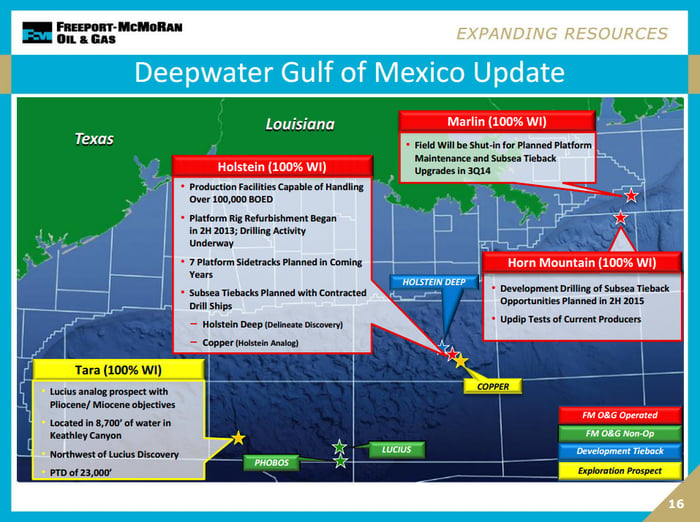 Investor takeaway
Freeport-McMoRan was able to take advantage of the pullback in spending by big oil to secure a bigger lease position in the Gulf of Mexico. This big bet could pay off big time over the longer-term. As it does it will further diversify the copper giant's revenue stream away from mining and into energy.

Does that make Freeport-McMoRan the top stock to own in 2014?