When Darden Restaurants (NYSE:DRI) reports fiscal third-quarter earnings on March 21, it's unlikely that Mr. Market will have much of a reaction. For most companies, there is the possibility of a huge swing one way or the other. But for Darden, which reported preliminary results on March 3, the chance of a surprise is somewhat limited.

What does all of this mean for the Foolish investor? Is now an attractive time to jump into shares of the restaurant conglomerate, or should investors steer clear?

Darden's expectations are low!
Management did not forecast quarterly revenue growth, and Mr. Market anticipates the business will see sales of $2.26 billion, flat with year-ago results. But this flies in the face of management's latest report, which claimed that comparable-store sales have been falling at its three largest restaurant chains. 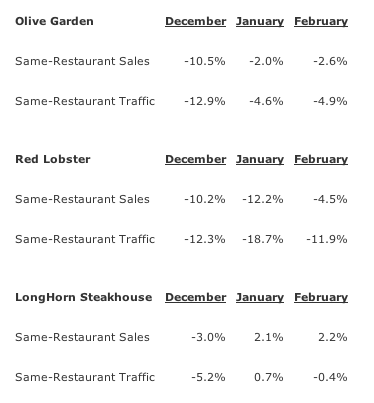 In spite of top-line performance flat with a year ago, management expects the company's profitability to fall. If Darden can meet its own expectations, it will report earnings per share of $0.82. This represents a 12% decline compared to the $0.93 analysts initially forecast. It's also 20% lower than the $1.02 the company reported in the year-ago quarter.

Darden isn't alone in its troubles!
Over the past year, Darden has been only one of a large number of restaurant companies facing trouble. In light of rising competition from the likes of Chipotle Mexican Grill, Panera Bread, Noodles & Company, and Potbelly, restaurant conglomerates like DineEquity (NYSE:DIN) and Yum! Brands (NYSE:YUM) have fallen short.

During fiscal 2013, for instance, Darden saw its revenue rise 7% from $8 billion to $8.6 billion. According to the company, the revenue increase came about because of a 2.1% lift in comparable-store sales in the specialty restaurant group combined with a 7.9% sales increase from new restaurant locations. Although this looks acceptable, the company's sales growth was partially offset by a 1.3% decline in comparable-store sales at Olive Garden, Red Lobster, and LongHorn Steakhouse locations.

In terms of profits, Darden saw its net income fall 13% from $475.5 million to $411.9 million. The underlying reason behind this drop was an increase in the company's cost structure, mostly higher restaurant expenses, labor, and food and beverage costs. In the first two quarters of fiscal 2014, Darden's bottom line fell a further 38% from $144.4 million to $90 million amid lower comparable-store sales at its core restaurants (Olive Garden and Red Lobster).

Over the same period, DineEquity's revenue fell 25% from $849.9 million to $640 million; Yum!'s revenue dropped 4% from $13.6 billion to $13.1 billion. DineEquity's revenue decline came about because of a transition to a business in which 99% of revenue is derived from franchised locations instead of company-owned restaurants. This results in lower revenue but is expected to yield higher margins.

Yum! was negatively affected by a 13% drop in comparable-store sales in China and faced sluggish growth elsewhere. But it helped to cushion the decrease in revenue through the addition of new restaurants. For the year, the company added 1,952 restaurants, 82% of which were set up in emerging markets.

In terms of profitability, both businesses fell short just like Darden. Over the past year, DineEquity's net income fell 42% from $122.5 million to $70.8 million. This decline was due, in part, to the drop in sales. But it was also attributed to higher asset- disposition gains booked a year earlier combined with profit impairments management expected from its refranchising efforts.

Yum! saw a 32% decline in net income from $1.6 billion to $1.1 billion during the year. This shortfall was due to its sales decline. But management also chalked it up to higher impairment charges as well as occupancy and other miscellaneous operating expenses rising from 24.6% of sales to 25.5%.

Foolish takeaway
Based on the data provided, it looks as though Darden's performance has been good on the top line but suffered on the bottom line. Fortunately, the business appears to be in a lot better condition than DineEquity and Yum!, but that's not saying too much. Moving forward, it's difficult to tell how well Darden and its peers will perform, but the trend isn't looking so hot.

Probably the one advantage the Foolish investor has with Darden missing with DineEquity and Yum! is the company's plan to spin off its Red Lobster operations. These restaurants have been performing very poorly recently, and getting rid of the assets might allow management to improve its other chains.