Tahir Haneef
(tahirpalliyath)
Author Bio
Tahir Haneef has more than eight years of experience investing and trading. He loves to write about companies by digging deeper in to their financials and SEC filings. He believes trend can be formed because of wrong reasons. He says that you need to watch out to prick such trends for the greater good of all. @tahirpalliyath

In last 10 years, print media companies like New York Times (NYSE:NYT), Gannett (NYSE:GCI) and McClatchy (NYSEMKT:MNI) lost 60% of their valuation. Welcome to the world of yesteryear heroes, now at the bottom of the pile of investor confidence. Is there a probable multibagger pick here? You may find one, read on.

Lost valuation
The Internet may have done terminal damage to print. Even well-established brands like Forbes, Boston Globe, Newsweek and Washington Post couldn't withstand the margin pressure. Earlier, the advertisers had less choice and print media had pricing power based on their circulation numbers. Now traditional media, social media and other innovations in the digital space are all aiming for the same advertising pie.

McClatchy, New York Times and Gannett fell below $10 per share in 2009, before recovering from lows in later years. New York Times sold off Boston Globe to tide over its cash crunch. McClatchy and Gannett pursued similar strategies to stay afloat.

Even though New York Times and Gannett could regain at least a third of their lost ground in NYSE trading, McClatchy fell behind. 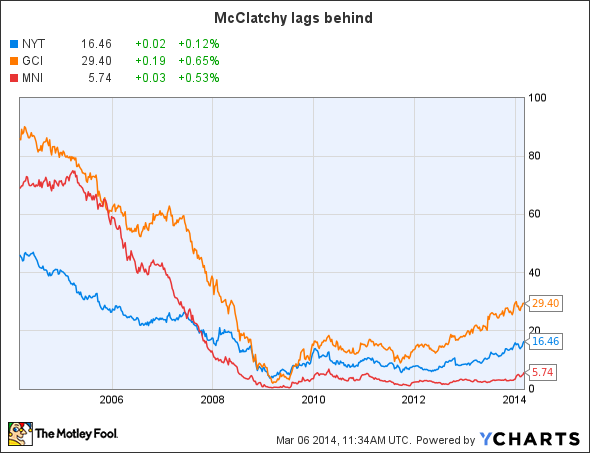 Acquired troubles
McClatchy suffered more on its wrongly timed purchase of Knight Ridder, then publisher of 32 newspapers, in 2006. The acquisition came at the wrong time, just as the world was going into a multiyear recession. But such hindsight shouldn't be used to judge its management. To be fair, the management was ambitious when everyone's confidence was also high.

Yet, you may be saddened by the fall in its share price from $75 in 2006 to $0.50 in 2009. The firm was left sitting with a huge pile of debt when the world was becoming very allergic to debt. As the recession set in, advertising revenue decreased drastically. McClatchy's ability to service its debt was questioned by investors. And with the migration of US newspaper readers to the digital space, McClatchy was seen to be heading toward bankruptcy.

McClatchy has been able to cut down its debt and has sustained its operating margin through difficult times. Its focus on local news and advertisers has served the firm in good stead. Yet, the income available to shareholders had been consistently low owing to high interest expense.

Going Digital and Local: Turn around drivers?
McClatchy owns leading newspapers like Star-Telegram, The Sacramento Bee, The Kansas City Star and the Miami Herald. Its newspapers are leaders in each of their local markets. This local focus distinguishes this firm and gives hope about its future.

If the firm's management continues to show the same adeptness as it showed during the recession, then McClatchy could be a turnaround story. The firm's digital advertising revenue is now around 25% of its total ad revenue. Also the revenue from National advertisements is much lower compared with the company's local retail advertisement revenue. Classified advertisements are also a strong component in the firm's revenue.

As you can see, McClatchy is moving into digital media and is tapping the local market for its growth. This could be a lead differentiating factor going forward.

What about its Debt?
The company is now touching a billion dollars in annual sales and its long-term debt is higher at $1.5 billion. Most of its debt will be due only after 2022, but pension liability is adding to its financial woes.

The firm may not be able to get out of the debt very fast, but strategic selling of some of its brands could be useful to trim its debt. As the company has a roster of brands, 30 daily newspapers and other publications including websites, management has the freedom to shed more brands.

The latest news of McClatchy netting $90 million through the sale of one of its associated classified business website-Apartments.com is welcome news for its investors. The firm holds a 25.6% stake in Classified Ventures-a partnership with Gannett, Tribune, Graham Holdings, and AH Belo. Classified ventures are the owners of Cars.com and Apartments.com. According to media reports, it received a $2.5 billion bid for Cars.com last week.

A few more such sales and McClatchy will have a much reduced debt level and much less interest to pay, boosting earning per share available to share holders.

What are the Risks?
Before pressing the buy button, you need to check the risks in investing in McClatchy. The family holds majority voting power through a favorable structure of Class A and Class B shares. Such a favorable voting power had allowed the management to bypass the shareholders in its decision to buy Knight Ridder.

The street is very pessimistic about this stock, with huge short interest and negligible coverage from analysts. A lot depends on the ability of its management to drive digital revenues.

What Now
Clearly, more value is becoming visible in McClatchy's newspaper business and its digital properties than the current price given by the Street. The company's current Market cap of $458 million is not even half its annual revenue. You may be tempted to start buying shares of McClatchy at the current market price. Fair enough. Can you see a potential multibagger investment here? I can.