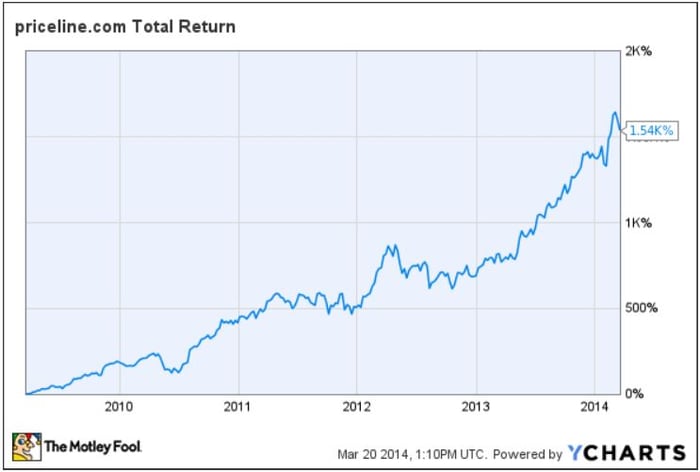 priceline.com (NASDAQ:BKNG) has been one of the most explosive growth stories in the market over the last five years: The company delivered breathtaking gains of nearly 1,540% through that period. Investors may understandably feel concerned about the stock at these sky-high levels. However, make no mistake: Priceline still offers plenty of upside potential in the long term.

A leading player in a growing industry
Priceline is the growth leader in the online travel industry, materially outgrowing competitors such as Expedia (NASDAQ:EXPE) and Orbitz Worldwide (NYSE: OWW) by a considerable margin over the last several years. 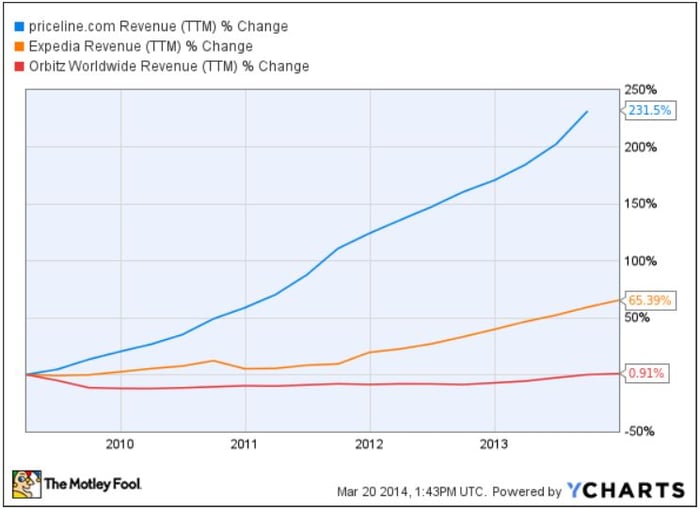 And there is no sign of reversion in the trend as of the last quarter: The company continues to outperform the competition and gain market share in an exciting growth business.

Priceline reported a remarkable growth rate of 39% in gross bookings during the fourth quarter of 2013, to $9.1 billion. Total sales increased 29.4% versus the prior year to a record $1.5 billion, and adjusted net income came in at $8.85 per share, comfortably beating analysts' expectations of $8.29 per share and representing an increase of 30.7% versus the $6.77 per share the company earned in the fourth quarter of 2012.

Expedia is Priceline's biggest competitor, and the company also reported better-than-expected performance for the fourth quarter of 2013, with gross bookings growing by 21% to 9.1 billion and revenues increasing 18% to $1.15 billion during the period. However, even if Expedia is doing quite well, Priceline continues to grow at a faster rate in recent months.

Orbitz Worldwide is materially smaller than both Priceline and Expedia. The company is seeing signs of improvement in areas like sales and profitability lately, but it still has a long way to go before it can become a serious threat to its bigger rivals. Orbitz Worldwide delivered a 4% increase in sales for the last quarter of 2013 to a modest $197.4 million during the period.

Priceline is not only firing on all cylinders, but also consolidating its leadership position in a remarkably attractive business. This is crucial in the online travel industry, where the network effect means that the value of the service increases as the company grows in size, so competitive advantages and size reinforce each other.

Hotels, airlines, and car rental companies want to go with the online travel agency that provides exposure to more customers, and travelers choose the agencies that offer more alternatives and better deals. Priceline becomes more valuable for both buyers and seller as it grows in size, and this attracts more users to the platform over time.

Moving forward
Priceline owns a leadership position in Europe, a major destination for travelers from all over the world through both good and bad economic times. Its Booking.com has built a gigantic network of more than 425,000 hotels and other accommodations, and this should provide a strong foundation for growth over years to come.

The company is also well positioned for growth in the Asia-Pacific region, where, according to management: "[Priceline's Singapore-based] Agoda strengthened its position in the fast-growing Asia-Pacific market making great strides in mobile functionality, accommodation supply and localization efforts" during the last quarter.

Priceline has always differentiated itself from the competition based on its global approach to the business, and emerging markets in Asia and Latin America provide enormous potential for expansion as the online travel market is substantially underpenetrated in comparison to developed countries.

The company is also adapting to the mobile revolution at full speed. Booking.com produced more than $8 billion in gross mobile bookings during 2013, a huge increase versus $1 billion in 2011 and $3 billion in 2012. This is not only important in terms of sales and growth, but also when seen from the perspective of providing a high-quality service for customers in a world of multiple screens.

Even after such a spectacular rise over the last few years, the stock does not seem excessively valued when considering its growth prospects. Priceline trades at a forward P/E ratio near 20 times earnings estimates for 2015. This is an above-average valuation, but hardly unjustified for a company that is growing at nearly 30% per year and still offering abundant room for expansion.

Bottom line
Priceline's gains over the last several years have been nothing short of amazing, but that doesn't mean it's necessarily too late to jump on board. On the contrary, the company is generating substantial growth for investors while consolidating its competitive strength in a promising industry. Besides, its valuation is still quite reasonable for such a profitable growth business. The online travel leader is positioned to continue gaining altitude in the years ahead.