Under Armour is constantly trying to steal share from Nike, but it's not easy.

Under Armour ( UAA 1.96% ) certainly knows how to make a splash. Last week it announced its Brazil launch in 70 retailers (brick and mortar plus e-commerce) alongside George St-Pierre (MMA Champ) and Chris McCormack (Ironman champion). MMA is the second most popular sport in Brazil behind soccer. Therefore, having George St-Pierre at a press event is likely to resonate well with consumers.

Of course, the 2014 World Cup plays a big role in Under Armour's Brazilian expansion. Under Armour is going to do everything in its power to ensure it performs better than it did at the Olympics.

The good news for Under Armour is that Brazilians are heavily into sports. Therefore, they will likely be interested in apparel, footwear, and equipment that has the potential to help athletes improve. That said, it's really about the brand's popularity among consumers, which is why having the best professional athletes as allies is a massive boon.

Nike has Cristiano Ronaldo (Portugal) and Frank Ribery (France) wearing its logo. Adidas hasn't been quite as aggressive signing professional international athletes, but it does still own 11.4% of the global sporting goods market, which isn't too far from Nike's 14.6%.

Adidas will be selling an official match ball, the Brazuca, for $100 during the World Cup. It will also sponsor Germany and Argentina, and it plans on improving its social media presence.

These are all good moves for Adidas, but looking at this from an investment perspective, Adidas has been lagging its peers on the top line for the past five years: 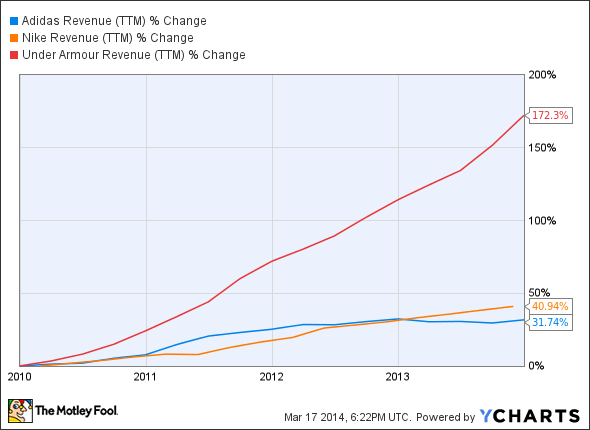 Narrowing this down to Nike and Under Armour, the competition isn't just about geographical expansion, but digital expansion as well.

Digital expansion
In January 2012, Nike launched its Nike+ FuelBand, a device that allows people to track how much, how often, and how intensely they move. But according to Nike, this is just the beginning. The company sees tremendous opportunity in the digital arena.

Under Armour later launched its Armour39, which tracks your heart rate, calories burned, and intensity. There's also a WILLPOWER score, which tells you how hard you've been working.

The Nike+ Fuel Band appeals to a broader market -- not just athletes, but people looking to see how active or inactive they are throughout the day. The Armour39 is more geared for the performance athlete.

Nike appears to be winning in this arena, and it has greater social media exposure. However, Under Armour never taps out. In order to increase its digital exposure, it recently purchased MapMyFitness.com.

The Foolish takeaway
Nike is still the dominant force in sporting apparel. This extends to digital and social media platforms. However, while Adidas doesn't appear too much of a long-term threat, Under Armour continues to scratch and claw its way higher. Its alliances with international athletes, digital innovations, and a recently successful acquisition might all lead to a bright future.