Ten weeks into 2014, mortgage real estate investment trusts have had a pretty good run. Annaly Capital Management (NYSE:NLY) is the dean of group. The oldest and largest mREIT boasts a total return of 16.7%. 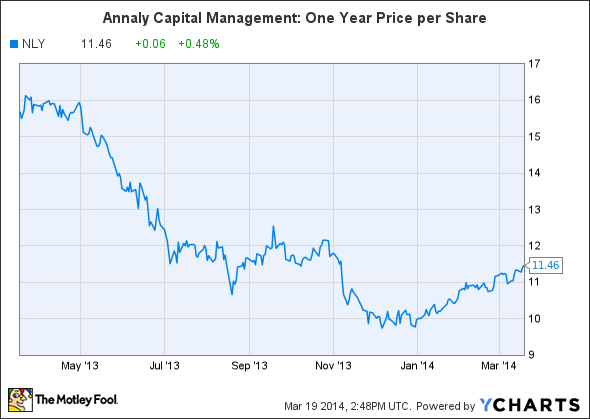 Longer-term investors know this near-term uplift has been a blip against the hammering the shares took in 2013. Has the stock turned the corner, or is it a value trap?

Understanding the mREIT business model
At its core, the business generates cash by borrowing short-term funds, then investing the proceeds in longer-dated mortgage-backed securities and pocketing the interest rate differential. This differential is commonly referred to as "the spread." In addition, Annaly's management has several financial tools to augment this basic model. These include hedging mechanisms, securities duration selection, and leverage.

Over the past few years, the low-interest rate environment lured some yield-hungry investors to Annaly's double-digit yield. They piled into the shares without fully realizing the risks. When long interest rates rose quickly in May 2013, certain retail investors panicked and turned a bad situation worse. The Annaly price-to-book plummeted below 1.0.

Historically, this has been a tip to buy. 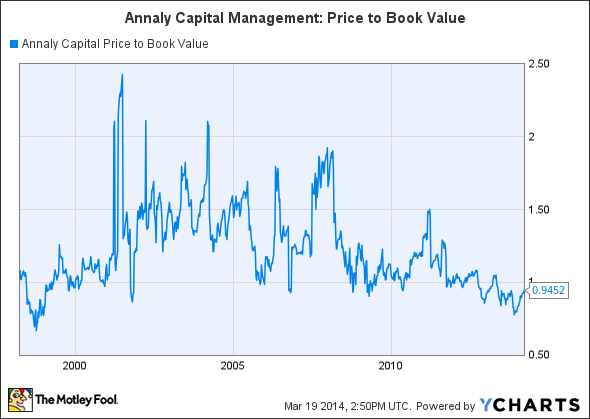 Rarely have Annaly shares experienced P/Book values below 1.0. Essentially, the company represents a portfolio of relatively liquid investment securities. Risk of default is low. Investors should expect P/Book to run between 1.0 and 1.5.

Currently, the P/B is 0.9. Theoretically, it would cost more to recreate Annaly's portfolio than to buy the shares.

Note again that mREITs make money on the "spread," or the differential between short and long rates. High or low rates don't matter as much as the differential. Using hedging and leverage, Annaly management can focus on maximizing investment income or protecting book value. It's tough to do both at once. Furthermore, mREITs don't do well when rates move quickly. Last spring saw long interest rates shoot upward in a highly compressed time period.

Here's the second key chart: Annaly's common share price plotted as a function of the spread between two- and-10-year Treasuries. Notice the correlation until 2013. 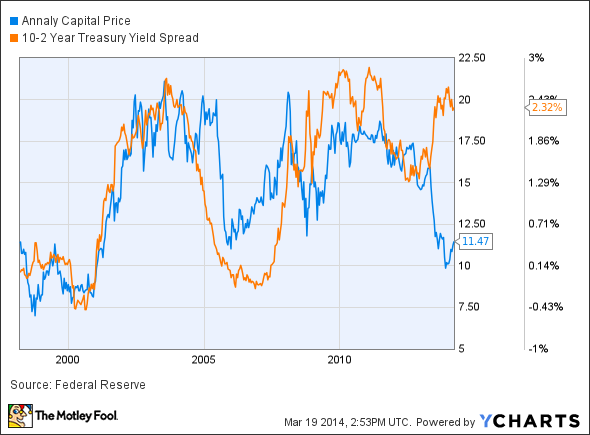 What changed? Well, the period marked the largest and fastest 10-year Treasuryrate spike in decades. Therefore, one may ask, "Why should this price-versus-spread divergence persist?" Historically, it's difficult to defend. Either the interest rate spread must plummet (meaning a flatter yield curve, often signaling recession), or the Annaly share price should rise on wider spreads and greater resultant net investment income.

Patient investors may interpret the aforementioned long-term data points and use the apparent mispricing to build a position, reinvest the dividend (still yielding nearly 11%), and wait for a recovery.

With leverage at a historically low 5.0-to-1 ratio, Annaly could still face some pain but the road is becoming clearer. On balance, it appears Annaly has better positioned itself entering 2014.