I am a strong advocate of investing in so-called "comeback stories." My belief is underscored by the notable comebacks of Best Buy and Netflix in recent times. Within a few short months, Best Buy gained more than 200% and Netflix did even better, mounting an astounding 480% comeback from its former lows. Investing in potential comeback stories is nevertheless fraught with risk. Stocks that have fallen in dramatic fashion have typically done so for good reason, showing the importance of understanding how a specific change in a company's fundamentals may lead to a rally.

While the health-care sector certainly has its fair share of potential comeback stories, I think Amarin (NASDAQ:AMRN) and VIVUS (NASDAQ:VVUS) may have the ingredients to turn their fortunes around. So, let's consider which company has the better chance of writing a comeback story. 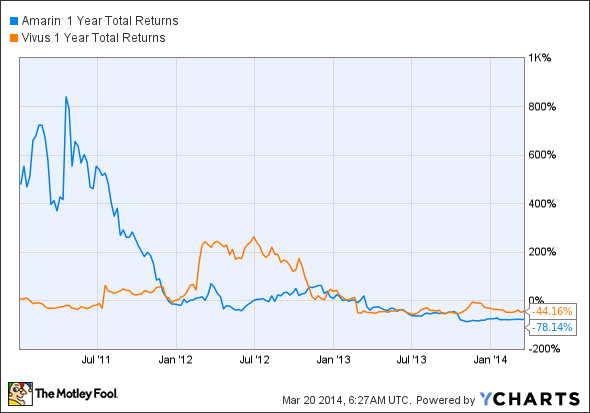 A look at Amarin
Amarin's story begins and ends with its purified fish oil pill Vascepa. Vascepa is approved for use in individuals with very high triglycerides, but the drug failed to gain approval for use in a broader patient population with moderately high triglycerides last year. Since the Food and Drug Administration rescinded the Special Protocol Assessment (SPA) for Vascepa's ANCHOR indication, nearly everything has gone wrong. Namely, Amarin's share price has dropped almost 80%, major changes in top-level management have taken place, the FDA rejected Vascepa's application to be designated as a New Chemical Entity, the sales force has been reduced by half as a cost-saving measure and now lawsuits with competitors and the FDA have been filed.

On the bright side, Vascepa sales have increased, albeit modestly, in the fourth quarter of 2013 to $10.1 million compared to prior quarters, and more insurers are including the drug in their formulary.

Looking ahead, one can easily point to GlaxoSmithKline's (NYSE:GSK) blockbuster fish oil pill, Lovaza, for a reason to be optimistic. Lovaza is also only approved for use in patients with very high triglycerides, and has been a commercial success. That said, Lovaza has seen falling sales recently, which may be an indication that doctors are losing faith in omega-3 therapies in general. Time will tell.

A look at VIVUS
VIVUS has two approved drugs on its commercial roster. Namely, Stendra is a treatment for erectile dysfunction and Qsymia is indicated for chronic obesity. Qsymia was supposed to be VIVUS' star drug, but it has struggled mightily since its commercial launch. Despite a large and growing obesity market, Qsymia only garnered roughly $24 million in sales last year. And even though Stendra has now been licensed out to a number of larger partners, it has also failed to contribute significantly to VIVUS' bottom line.

The result has been a company in turmoil. Multiple changes in upper-level management have occurred in the past 12 months, and VIVUS' share price has now dropped 44% from its former highs. The bright spots are that insurance companies have started to include obesity medications in general in their formulary, and VIVUS has a decent cash position with about $140 million remaining.

Foolish wrap-up
A head-to-head comparison of Amarin to VIVUS paints a picture of two biotechs treading water in hopes of staying afloat. Complicating matters, neither company has much in the way of a clinical pipeline that could provide investors with hope in the long term. Put simply, these two companies will either make it or not based on their currently approved products. The choice thus comes down to your views of Qsymia and Vascepa going forward.

My outlook is that Vascepa probably has the better chance of gaining traction commercially. Indeed, Vascepa already has higher sales and prescriptions are growing at a faster rate than Qsymia. Moreover, Amarin is based in Ireland, giving it a favorable tax structure compared to VIVUS. Overall, I believe Amarin is worth considering as a potential turnaround story, but you need to understand that this process won't happen overnight. Amarin still has a number of clinical, commercial, and regulatory hurdles that need to be overcome before it's smooth sailing.