If you're going to invest in a "young" production company, then you're likely going to consider Lionsgate Entertainment (NYSE:LGF-A) or DreamWorks Animation (NASDAQ:DWA). Both of these companies were founded around the same time: Lionsgate was founded in 1986, while DreamWorks was founded in 1985. While both have delivered some big hits over the years, one of them should clearly offer more potential than the other does.

Recent success
DreamWorks Animation's Mr. Peabody & Sherman came in tops at the box office this weekend with $21.2 million in box-office sales. It also only dropped 34% from the prior (opening) weekend. This might not sound good, but the result was right in line with that of How to Train Your Dragon, and it's better than the 39% drop The Croods saw in its second weekend.

However, it's not going to be a home run. As expected, moviegoers see the movie as good, not great. Mr. Peabody & Sherman currently sports a Rotten Tomatoes approval rating of 79% as well as a 7.1 (out of 10) rating on IMDb.com. Therefore, it should have decent yet not extraordinary future at-home viewing potential.

DreamWorks Animation should have more potential with How to Train Your Dragon 2 (June 13, 2014) and How to Train Your Dragon 3 (June 17, 2016). The original only did $217.5 million at the box office domestically and $494.8 million worldwide. I use the word "only" here because the movie had a very strong Rotten Tomatoes audience approval rating of 91% and a solid 8.2 rating on IMDb. At least these positive reviews should lead to increased demand for the sequel.

Strong brand development
Many people don't believe in Lionsgate Entertainment's prospects, but they might be missing the big picture. Though it has not exclusively focused on this, Lionsgate is clearly attempting to become the leader in young-adult filmed entertainment. The Hunger Games has been a huge success thus far and Divergent will likely attract the same crowd.

These types of franchises attract cult-like followings. That being the case, even if an installment of a popular franchise misses, these fans aren't likely to give up. While production companies aren't often seen as developing loyal followings -- with perhaps the exception of Disney -- Lionsgate Entertainment is achieving this goal right now.

In addition to the aforementioned trilogies, Lionsgate Entertainment will release The Outliers trilogy down the road. Reese Witherspoon will star as the lead, a woman searching for her friend in the woods only to find "The Outliers" -- a group of people who supposedly use intuition as a psychological weapon.

By the numbers
Both DreamWorks Animation and Lionsgate Entertainment offer potential, but their risks must be weighed. First consider a top-line performance comparison for the three aforementioned companies: 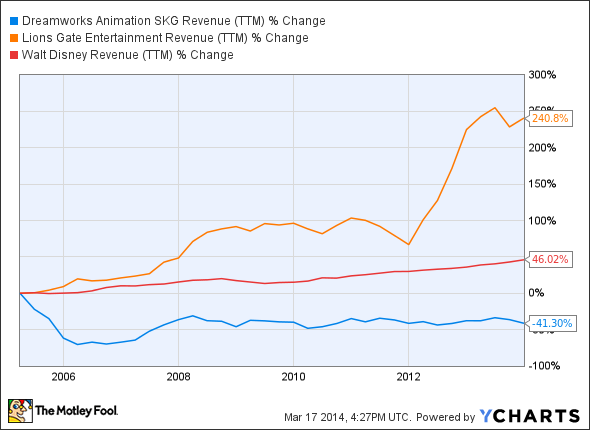 As far as Disney goes, it's a beautiful beast. It's steady on the top line, it has generated $9.52 billion in operational cash flow over the past year, it offers a 1.1% dividend yield, and it only trades at 22 times earnings.

The Foolish bottom line
This isn't to say that DreamWorks Animation is a poor investment option. DreamWorks Animation has had its ups and downs, and that's likely to continue. However, if you're looking for growth potential and more fiscal strength, then you might want to consider Lionsgate Entertainment first. If you prefer the safety of massive fiscal strength, brand recognition, and diversification, then you might want to consider Disney.