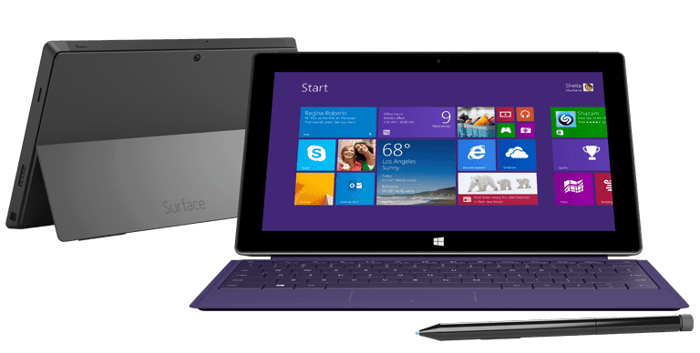 CFO Amy Hood elaborated on its performance, saying "We delivered record revenue as demand for our business offerings remains high and we made strong progress in our Devices and Consumer segment."

Sure enough, even as Windows OEM revenue declined 3% on soft consumer PC sales, revenue from Microsoft's devices and consumer segment jumped 13% to $11.91 billion. To explain that strength, the company can thank 7.4 million Xbox consoles sold during the quarter, 34% growth in advertising revenue from Bing, and -- perhaps most surprising -- Surface tablet revenue, which more than doubled over the previous quarter, from $400 million to $893 million.

Surface sales aren't what they seem
That last statistic seems especially impressive, right? What more could Microsoft investors ask than having sales of their promising tablets more than double over the course of just three months?

Well, I suppose they could ask Microsoft to actually make money on those sales.

Don't get me wrong; that was a big bump by any measure and definitely a step in the right direction. But Microsoft's respective Form 10-Q also lists Surface cost of revenue last quarter as $932 million, which means it lost around $39 million from the tablets despite their growth.

Then again, much of that had to do with the fact that -- thanks to a temporarily low $199 price tag -- Microsoft's first-gen 32GB Surface RT ended up being Best Buy's top-selling item on Black Friday. But is moving bunches of merchandise at rock-bottom prices all that encouraging?

Remember, Apple (NASDAQ:AAPL) sold more than 26 million iPads last quarter for $11.468 billion. And while that was only a 7% year-over-year increase in iPad revenue for Apple over the same period last year, it also marked an 85% sequential gain from the previous quarter.

What now?
This also raises the question: With the holiday quarter complete, will consumers still want to buy Microsoft's Surface tablets without the steep discounts?

Maybe, but I wouldn't hold my breath.

To its credit, at least some of Microsoft's tablet strength last quarter can be chalked up to the Oct. 22, 2013, launch of its Surface 2 and Surface 2 Pro devices. And though we've seen sporadic reports of Surface 2 supply shortages over the last two months, it's still unclear whether that's a result of actual consumer interest or Microsoft just carefully managing inventory.

I wouldn't blame it if the latter turned out to be the case. Last summer, Microsoft had to take a $900 million inventory writedown thanks to -- you guessed it -- those Surface RT tablets, which finally sold well in its most recent quarter.

Unfortunately, Microsoft hasn't provided any clarity by breaking down its Surface sales numbers, so we can't tell just how many of higher-margin Surface 2 tablets it's actually selling.

In the end, though, combine that with the fact Microsoft only now appears ready to launch Office for Apple's iPads later this month, and I can't help but wonder whether we're seeing the latest signs of desperation as Microsoft's own tablets continue failing to grab any meaningful market share.